DATA GEEK! what a great idea

I used Visual intelligence last year, and I have recently been playing with Lumira for a PoC I am building around Sales Order Creation. When searching for a little more info on Lumira I came across this Data Geek Competition and thought I had the perfect topic.

Having a brother As a professional rugby player was great growing up, I was lucky enough to attend loads of games, watch some of the best rugby players in the world, ALL FOR FREE. What became more interesting as I got older and understood the game more, was the way my brothers play changed as he got older, moved teams and took on a slightly different role. When questioning him on this, he was adamant that his style hasn’t changed that much and that he plays no different now to the first game he ever played.

Keen to prove this to him I found as much free data as I could from separate websites and even some manual Match Watching / Stat Counting of my own. I managed to amass at least SOME data from each year (plus some generated data based on the data I received to ensure there was a sufficient Data set) To generate some Analytical views to prove my point.

The real benefit in this data can be seen from 2006 onwards as at this point in his career he was playing most games in a season.

I cut down the data i’d amassed to 6 key features of the game….

This allowed me to show him some great stats, the first one being how the amount of Meters he runs has tailed of over the last few years. I call this Getting Lazy!

But then when you look at the tackles made against the chart, you could call it Getting Smart as more tackles are being made on average but less running being done. Maybe old age has given him the knowledge to see when a lost cause really is a lost cause. OR MAYBE HES JUST GETTING LAZY 🙂

Then I could show him how he now plays more as a facilitator than a bulldozer! his pass percentage has increased drastically as the years have gone on, this is probably due to confidence, but he informed me he stands as the first receiver more these days because of the style of play his current team uses.

Lastly I outlined that he kicks the ball now more than he ever did, for a forward he’s not a bad kicker, but this reinforced the point i’ve been making to him for years…….. Stop kicking the ball!!!!!

All in all, the data’s a little simple and a little bit fabricated due to lack of resources, but what it shows is that as you get older and wiser, professional sportsman do adapt to the game they play. YOUTHFUL ENTHUSIASM ISN’T EVERYTHING 🙂

When showing him the data he was pleasantly surprised with the findings! 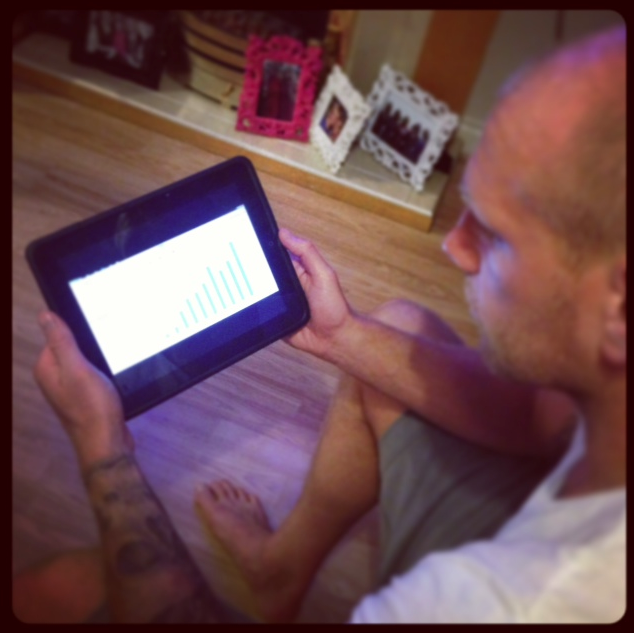 By next year’s competition I hope to have full data sets for multiple players across multiple years. This will then give me a wider range of data to prove my theory.