The cell phone ranks as the most rapidly adopted new technology in history. (The previous record-holder? The microwave!) Mobile internet connections now outstrip broadband 7 to 1 (learn more about it in the whitepaper). And the personal computer is now being referred to as “traditional.”

But as phones become even smarter, is business smartening up about how to make use of the mobility surge? And if it does, is it doing so fast enough?

A recent itelligence white paper, “Making ‘Changes in Order’: The New Role of the CIO,”  neatly sums up the concerns arising from the invasion of mobile devices into business, while strongly emphasizing their upside.

The paper lauds the BYOD (bring your own device) movement as a way of significantly elevating both employee morale and productivity. At the same time, companies are seeing an increased risk of security gaps resulting from the often uncontrolled proliferation of competing devices, buggy operating systems, and aggressive apps.

So it’s a must, the paper notes, for businesses – specifically CIOs – to control how these devices are used, and for security measures to be clearly and openly communicated. Yet, over half of companies surveyed place no limits on their use.

On the other hand, the authors caution that banning BYOD or placing too heavy a security hand on personal devices may alienate their owners: “One-third of [employees in their twenties] would ignore security policies if barred from use of personal devices.”

Basically, it’s imperative for CIOs to embrace mobility. By doing so, CIOs not only will become technology enablers, but even more valuable partners for business contributing to greater employee productivity and job satisfaction.

They also have to be prepared for the ever widening reach of mobility. With the development of Google Glass and other forms of “wearable computing,” businesses will be dealing not only with smartphones, but with mobility in forms that evolve at the speed of an electron. 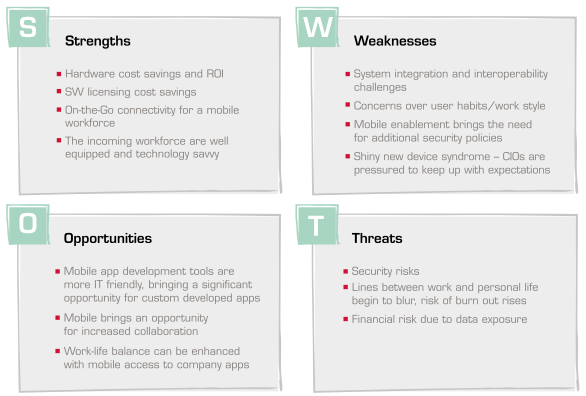