Product Catalogs in SAP can be created / changed manually via the transactions WWM1/WWM2 and displayed through WWM3.

However there is no direct function module or BAPI available in SAP to create /change the layout of an existing product catalog.

Just to give an idea about what a product catalog looks like I am posting some screenshots of both the header information and the layout information of a catalog.

The first screenshot shows the header/basic data of a product catalog which primarily consists of the customer, sales area information, currency and variants (which again consists of id, language and currency ). 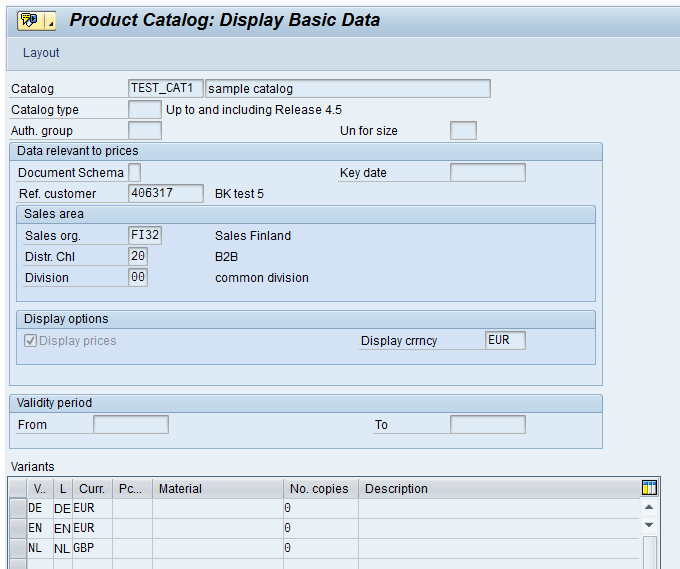 The second screenshot dispalys the layout area which has several nodes in a hierarchical fashion and the last node in a hierarchy contains the actual material information.

Here the two nodes refer to a particular brand and product line of that brand .The last node (product line) actually contains the material information.

The Texts checkbox is ticked which indicates that the layout area item has texts maintains which again can be seen from the “Texts” tab (second tab to the left on the upper echelon). 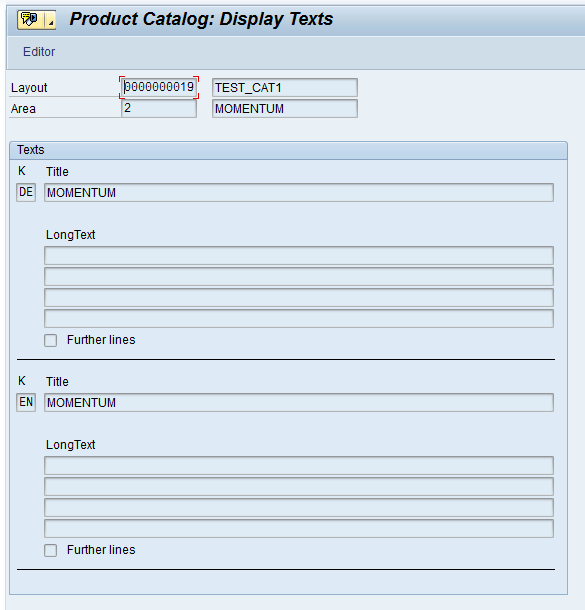 Automatic creation/change of a product catalog layout through an ABAP report involves the use of several function modules clubbed together . The ABAP report can have the customer number and the reference catalog id(whose layout needs to be changed, here it is TEST_CAT1 in the example screenshot shown above) as selection screen parameters. The process of layout creation/change is a repetitive one once you get hold of the basic principle.

In order to create a layout of an empty catalog (which only has the basic information but no layout area nodes) or to change an existing layout of a catalog (there are nodes in the layout but they need to be changed) the process that needs to be followed consists of the following simple steps:

This principle needs to be followed for all the five database tables  that will be impacted:

The function module needed to achieve step 1 above is :

Step 2 above needs the main population logic as it is used to create the internal table containing the layout data that we need to see in our layout ultimately. The old layout data can obviously be retrieved from the base by simple select statements.

The function modules needed to achieve step 3 above are as follows:

The function modules needed to achieve step 4 above are as follows:

The function module needed to achieve step 5 above is :

Following is a screenshot of code snippet showing the sequence of application of these function modules for table WLMT: 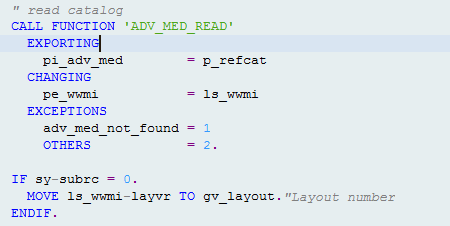 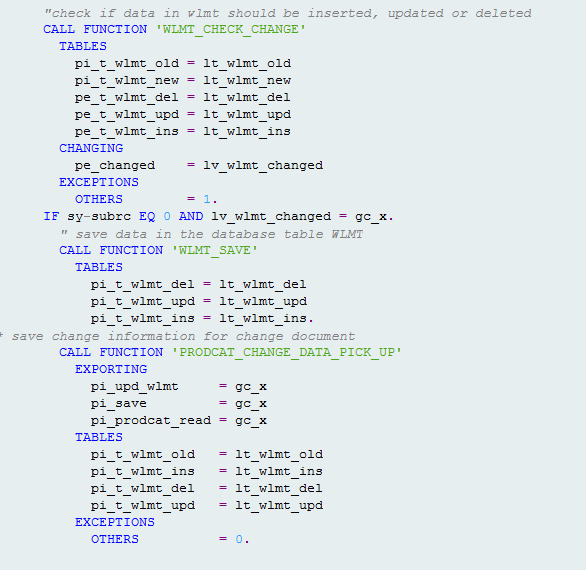 A similar process needs to be followed for all the other relevant database tables as well.

The PRODCAT_CHANGE_DATA_PICK_UP function module can to be used only once at the end to pick up all the data changes from all the various database tables and make them reflect in the product catalog.

Attached is a sample code illustrating the process . Thanks for reading

Thanks 🙂 Hope it helps 🙂

Thank you 🙂 Hope it helps 🙂

Was looking for a way to create product catalog through an RFC. This helped.

Is it possible to add discount types / Grid values for the materials we add.

You can only add values to the fields present in the WLBM table ( the fields which are editable in WWM2 transaction ). Others you cannot manipulate using this method.

Thanks for the helpful article , but the the process you mention "pick up all the data changes from all the various database tables and make them reflect in the product catalog." about 'PRODCAT_CHANGE_DATA_PICK_UP' is misleading .

Actually this FM seems to used to create " Product catalog: change documents" which is something like maintaining changelog.