Each year, in partnership with the Silicon Valley Leadership Group, the 49ers host this fundraising event for the community. All the proceeds go to the San Francisco 49er Foundation in support of City Year San Jose/ Silicon Valley and Fresh Lifelines for Youth. This year’s event raised over $1 million dollars. 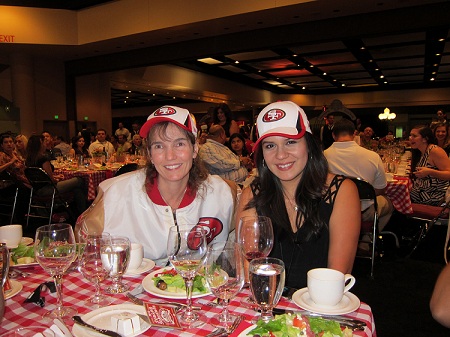 The beginning of the event was spent wine tasting, purchasing raffle tickets, perusing the silent auction memorabilia and mingling with colleagues and co-workers. When it came time for dinner, 18 of us moved to the SAP table and were soon joined by #77 Mike Iupati and #76 Anthony Davis.  Mike is on the offensive line, and is a graduate of the University of Idaho; Anthony, also with the offensive line, attended Rutgers University.

Mike and Anthony were gracious, kind and fun to have at the table. These BIG boys – Anthony is listed at 6’5” and 323 pounds and Mike’s a little bigger at 6’5” and 331 pounds –  put up with our incessant requests for signatures and made the rounds to introduce themselves to each and every guest at our table. 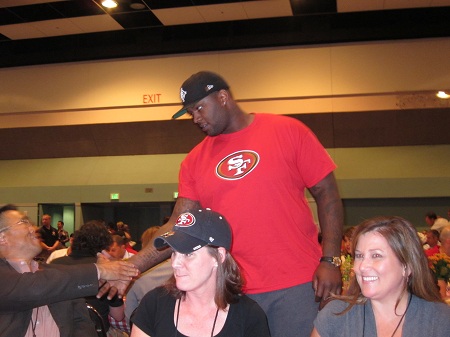 Anthony Davis greets everyone at the SAP table

What’s in That Blue Tiffany Box?

The highlight of the evening was watching each player go up on stage and receive the signature blue Tiffany box. Once everyone was seated at their respective tables, the players were told to open the boxes and retrieve their championship rings. I don’t know how much Mike’s ring weighed, but it felt close to 3 pounds. Mike Iupati grins as he shows off his new championship ring

Gideon Yu came by the table to say hello as well. Gideon was on the SAP Palo Alto campus in June, along with his boss, Jed York, to talk to employees about the SAP/49er partnership.

Last October, SAP announced a multi-faceted partnership with the San Francisco 49ers that involves technology and new application development, a marketing agreement for SAP signage and sponsorship opportunities, as well as the creation of a brand new Niner’s practice center in Santa Clara (named the SAP Training Center). 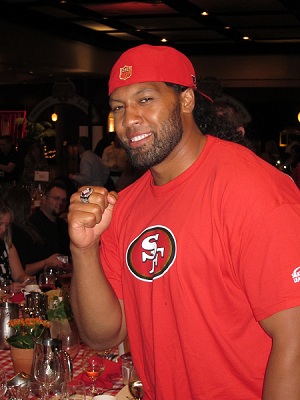 Showing off the new ring

This immensely popular event with Jed and Gideon, along with SAP’s Chief Marketing & Communications Officer Jonathan Becher, was recorded and is now posted on YouTube. If you want to skip the introductions, start watching at minute 8:37.

The title of the event was “Sports Technology Trends with the SF 49ers” and the topics were varied. They encompassed a number of themes including leadership, the role of consumer technology in building the new stadium, the use of technology on the sidelines (currently not allowed), bringing the Super Bowl to the Bay Area in 2016, SAP’s 25th vertical: Sports & Entertainment, as well as what SAP is working on with other sports organizations, including the San Jose Sharks, the NBA, and a fantasy football app with the NFL, to name a few.

We invited local media to this event and were extremely pleased to see many stories published about the partnership. If you have time, I encourage you to watch the video on YouTube or check out what the press wrote.

We’re looking forward to a winning season with the 49ers. I’m already budgeting for next year’s 8th annual Pasta Bowl and an SAP sponsorship. I know my colleagues and I would love to be there when the players receive their Super Bowl championship rings. 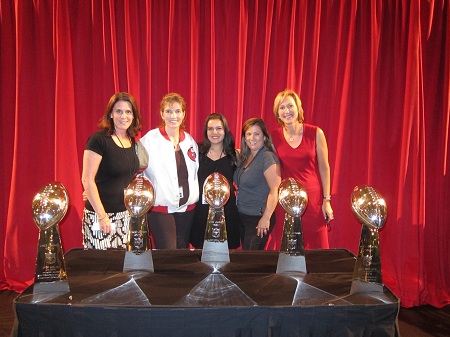 with the Super Bowl trophies

What a great opportunity to do good and meet some 49ers Players!

Glad you liked it Natascha! It was a super fun event to attend. And, I love how we have a great partnership with the 49ers and have begun get more involved with the SF 49ers Foundation too.