I was blogged forwarded by The specified item was not found. & Vivek Singh Bhoj . Thanks a lot guys for this opportunity to participate in this initiative 🙂 .

Its a great initiative and a good way to know the people here in SCN.

I am a SAP ABAP Consultant working in Wipro Technologies. My association with the world of SAP has been for the last 6 years and few months. Its been a great experience so far 🙂 . I am from Kolkata or Calcutta, India. I was born and brought up in the city. I live here with my family and for last 6 years working for Wipro in their office based in Saltlake. Been a member of SCN from times when it was called SDN 🙂 recently became more active in the space as I finally found a lot more of spare time to do so and the got hooked to it (maybe its gamefication syndrome ). 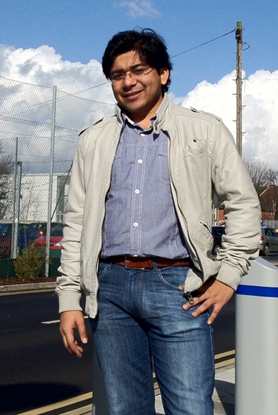 As it has already been told many times here 🙂 I would not like to reiterate the same. But the country is absolutely incredible in its beauty, culture, people and the sheer diversity in many varied aspects. Its a subcontinent so as to say. I love it and I take pride that it is my motherland. I would recommend all to visit the country once in a lifetime they will be amazed by the experiences of it. Would think the below link by the tourism department sums up few experiences that’s just great

Well Calcutta or Kolkata as it is called now is a large city that’s more that 300 years old. It was the capital of the erstwhile British India. It is situated on the banks of the Hoogly river, a dis-tributary of Ganges.

The city is vibrant. Its one of the 4 largest cities of India. Its a seat of culture and is also called the cultural capital of India. The weather here is very hot and humid in summer, a reasonably cool but moist monsoon and a very pleasant winter.

Over the last few centuries the city has been a major centre of education, trade and industry in the eastern part of India. Some legendary figures who are associated often with the city are Jagadish Chandra Bose, Satyandranath Bose, Rabindranath Tagore, Mother Teresa, Satyajit Ray, Amartya Sen and Sourav Ganguly and many more. The state to which the city belongs is now known as West Bengal, a part of the region better known as Bengal. The most common language spoken locally here in Bengali. It is one of the 22 official languages of India 🙂 .

The city is also famous for its bengali cuisine,  some of the most delicious food and sweets are attributed to the regions cuisine. To mention a few there are Rosogollas, Misti Doi.

The regions basic dishes comprises of fish. A meal of Fish Gravy and Rice is the most common here.

1) What makes you smile/laugh?

Company of good old friends and a place to hangout and catch up on life. 🙂 & sometimes as I am a film buff a nice Charlie Chaplin movie, where action speaks louder that words in its true sense.

2) Had you not been into software at all, where would you have been?

Well, this I had never given much of a thought but maybe professional photography or sports considering the love of cricket and Sachin, Sourav & Dravid. 🙂

3) What is the craziest thing you would have done in your life?

4) What is your best moment in life?

The best moment…nah I guess all the moments are unique and beautiful in its own way, So dont want to spoil others by naming a few as best 🙂

5) How did you get into SAP technology?

Bit of a fate I guess got campus recruited and trained in SAP by my present company as they were ramping up the SAP team.

That’s all from my side thanks to all for reading my blog.I would like to blog it forward to the following people:

1) What are the best experiences that you had while being part of this community?

2) What are the hobbies or activities that you enjoy most?

Nice to meet you and thank you for sharing.

Actually Tammy, I was going to comment but got distracted by <gasp> work.

Arindam Mondal, welcome to the #BIF!  This initiative never fails to amaze me - and I love that I can 'meet' fellow SCN-ers (or let's rock it old school, SDN-ers!).

'Company of good old friends and a place to hangout and catch up on life.' - that is the key, I am sure, to a healthy happy life.

You did not ask me, but I will answer your questions:

1) What are the best experiences that you had while being part of this community? - For me, the face-to-face events are the best  - where you meet the people you've corresponded/discussed/followed in real life.  But it starts online and then after an event, you can still keep up with them.

2) What are the hobbies or activities that you enjoy most? - I do sail, but since I also  have two kids and a dog I would have to say that I enjoy the small bits of time when I can relax and read a good book.

Thanks a lot Susan Keohan 🙂

Well I am an old timer but didn't socialize much I am a bit closed, but off lately I can say I am quite active on SDN say it the same gamefication I suppose

For BIF I would surely enjoy and will adhere to your call.... need a favor for BIF it is requested by SCN to post invitations http://scn.sap.com/docs/DOC-30977 if you can do the needful please.

Trying to put you on the list.. lets see 🙂

Good to know you.

Kolkota's Rosogollas are a treat to eat and very tasty.

One of my favorites

Thanks a lot for inviting me 🙂 . Yes they are my favourite too. 😀

first of all thanks for accepting BIF invitation. 🙂

i just love Calcutta "City Of Joy". you have put very beautiful pix.

good to know about your lifestyle.

Thanks to you for inviting me 🙂

Welcome to the BIF family!!

Amazed to see how I'm amazed every time when I see a new bif about India with new pics.

Thanks a lot xMoshe Naveh (Old Acct) for such a great idea 🙂 request you to guide me on how to link my blog to the BIF list I was unable to link my blog in the table maintained as this was also requested by forum friends here to whom I 'blogged it forward' .

go to that table page

give some name .. could be yours

Write your name and mark it with the mouse. Then use the icon "A" in editor and enter the link to this blog.

Please reach out to me if you need more assitance.

Arindam, very nice blog, good to learn more about you, and cheers for biffing it to me, however I have done the needful already 😉

Still happy to answer the questions:

1) connecting with other SAP experts, meeting great people (many online, and some also "live"), participating in interesting discussions, troubleshooting my technical issues, helping to increase content quality, having fun along the way, and more...

2) There isn't so much left nowadays...I keep enjoying my music collection (large), some yoga (beginner level), running/jogging (among the fastest in the slowest quartile), might want to get more into photography if time permits

See you where it's hap'nin (ABAP Development for those who wonder)

Ok Great.. 🙂 . Thanks for answering the questions. Good to know and keep learning more from your interactions in the forum 🙂

By the way, great blog dude 😉   i am learning lot of things from you through SCN 😎

Very beautiful pictures you have added here...fish,yummy i love fish 😉 😘

Thanks a lot 🙂 In fact I also keep learning from interactions in the forum..

Nice to meet you in this blog.... most of the issues I am seeing you and some of our SCN friends. Today I feel happy on being a member in SCN with friends like you.... 🙂

Thanks a lot , I also keep learning from interactions in the forum..