What is new with SAP Integration BusinessObjects BI4.1 and BW? Part 2

Patrice Le Bihan presented this ASUG webcast this past week.  Patrice Le Bihan is part of the SAP Analytics Solution Management team and currently responsible for the SBO Analysis products as well as the SAP NetWeaver BW and SAP ERP integration topics.  BI4.1 is in ramp-up.  Note that the usual disclaimer applies that things are subject to change.

The previous blog covered how connect directly to BI ERP What is new with SAP Integration BI4.1 and SAP ERP?

This blog discusses how to connect directly to BW and will be in two parts.

Over a year ago SAP published a statement of direction regarding Dashboarding where SAP will make Dashboards and Design Studio converge.

When it comes to BW, Design Studio is the favored tool. 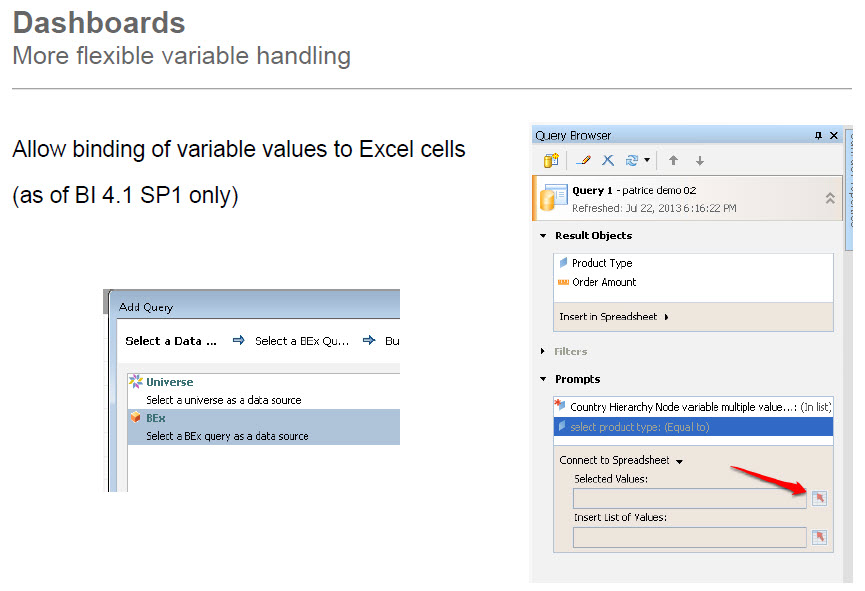 This is not part of the BI4.1 ramp-up but in SP1.  You have the option to bind variable values to cells. 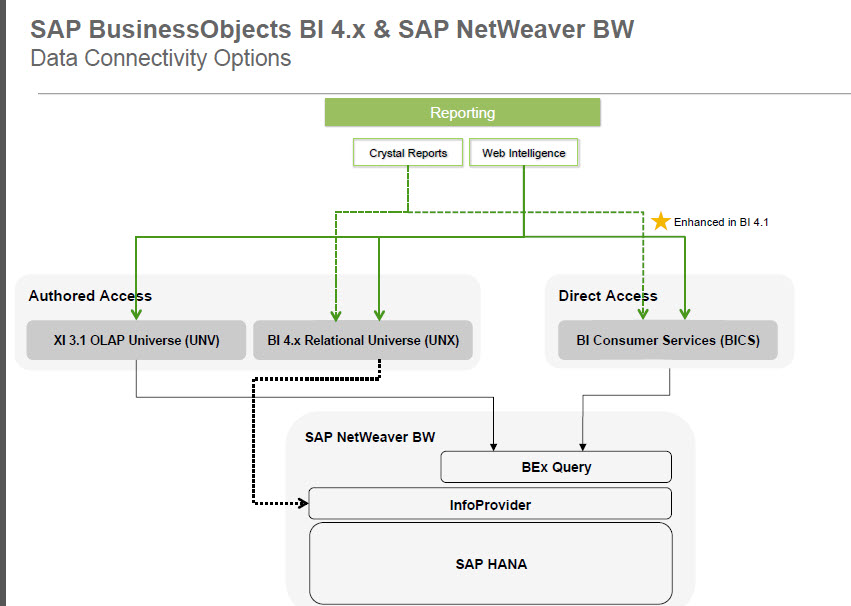 Web Intelligence improvements include better performance when working with BEx variables, member selection from a hierarchy based on relative depth, and reduction of #TOREFRESH and #UNAVAILABLE errors. 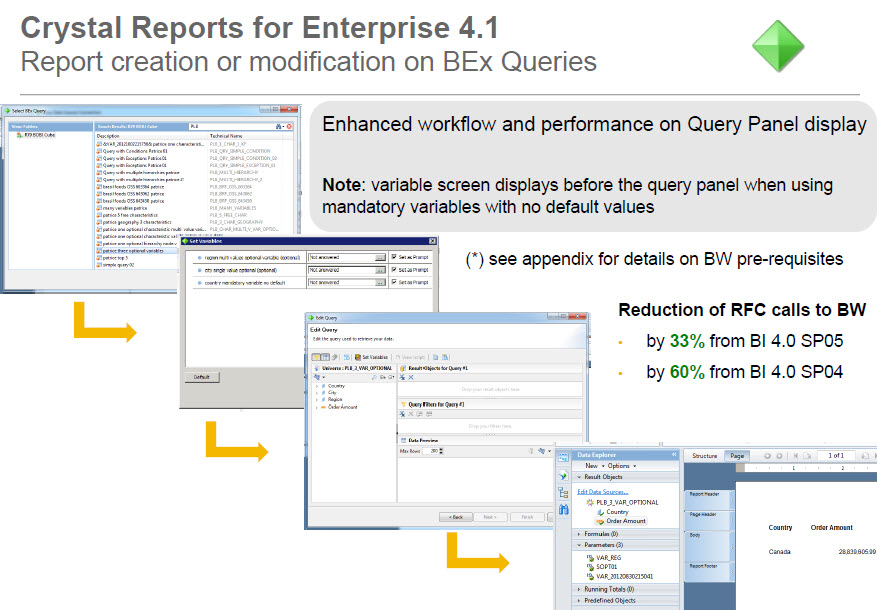 BI4.0 starts with selecting the BEx query, then you see the query panel and this is where the response time can be longer than expected.  The select your objects, build query, click next/run, then it would display the variable screen, set the values, and then get to the report.

Figure 4 shows the changed BI4.1 sequence.  Select the BEx query, next you will see screen with mandatory variables, then see the query panel.  It allows SAP to retrieve the variables differently and less RFC calls to BW. 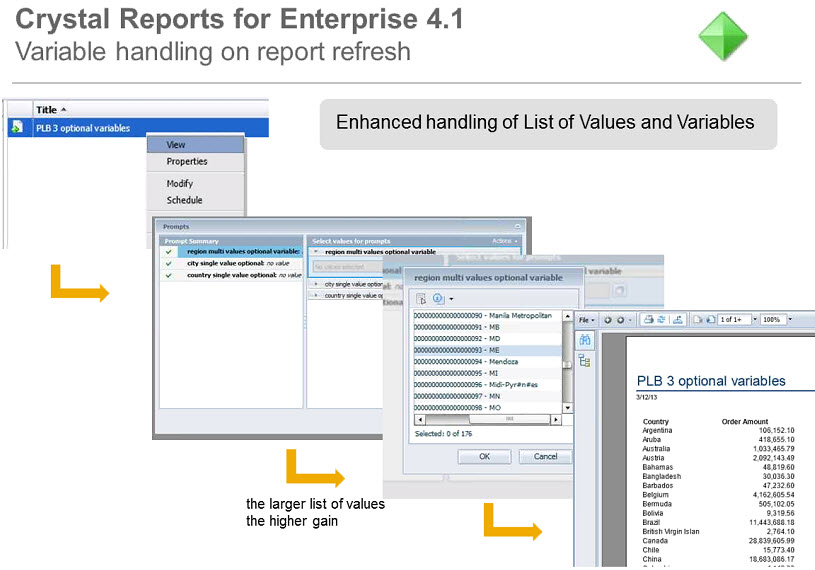 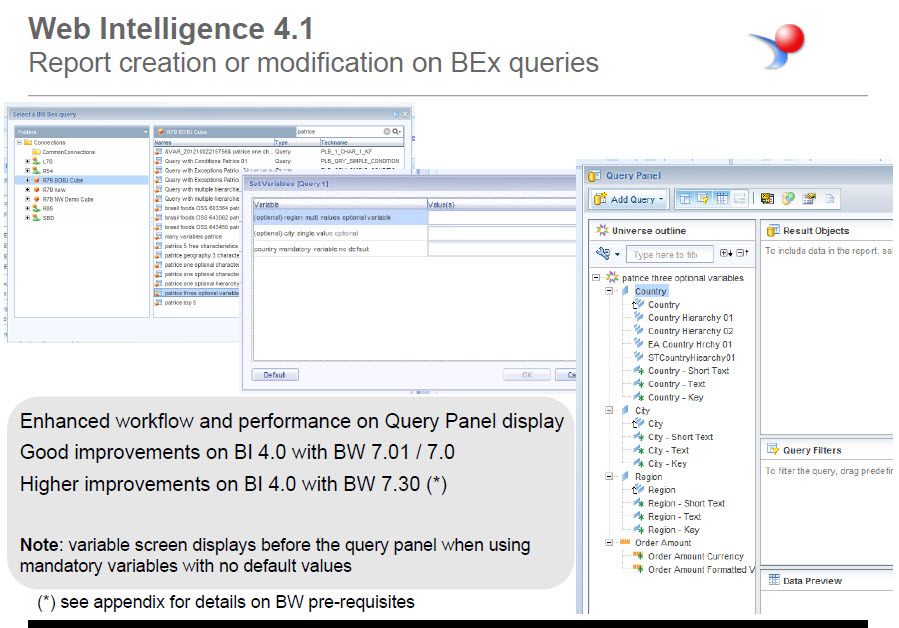 In BI4 Web Intelligence, you open the query panel, then the variable screen is shown.

This has changed in BI4.1 with the variable screen shown first. 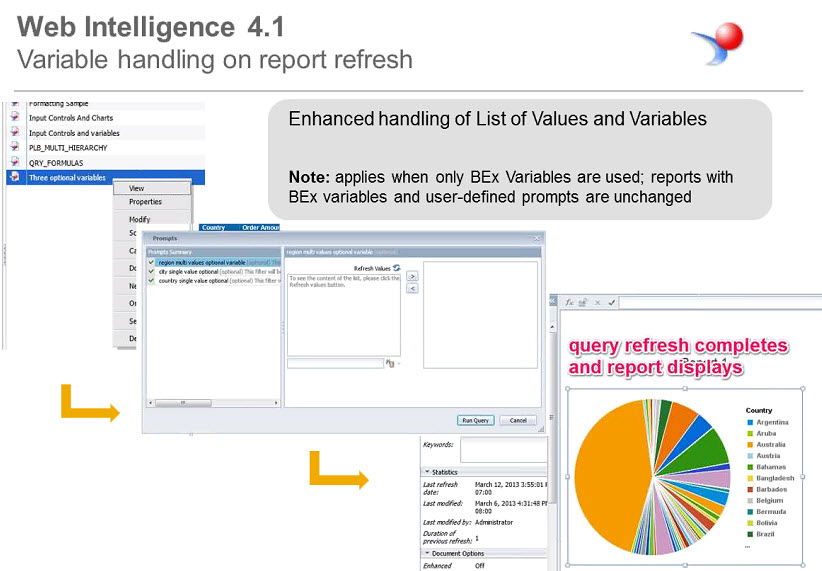 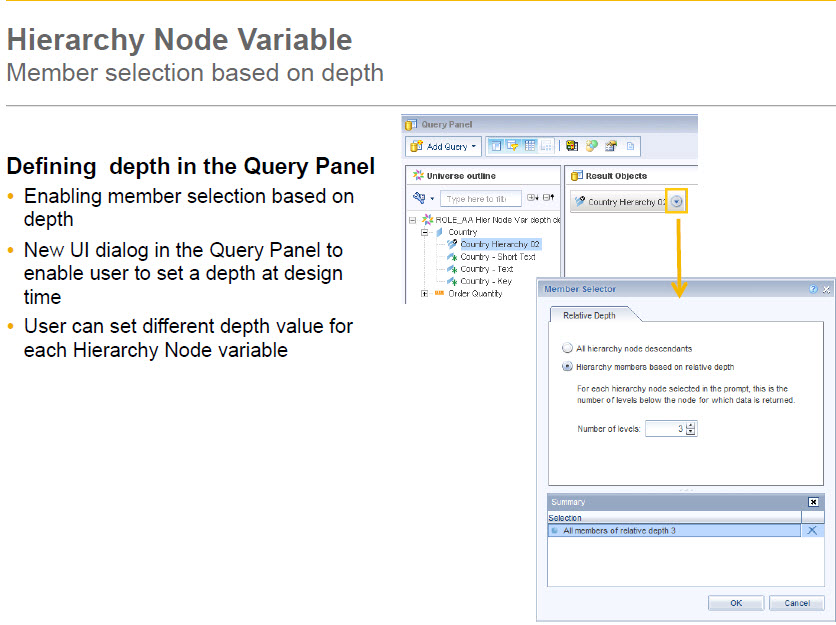 Another area for improvement is selection of members from a hierarchy.

SAP has added member selection based on relative depth – when you drag a hierarchy on the report – you can choose to select all descendants or only select 1, 2, 3 levels down. 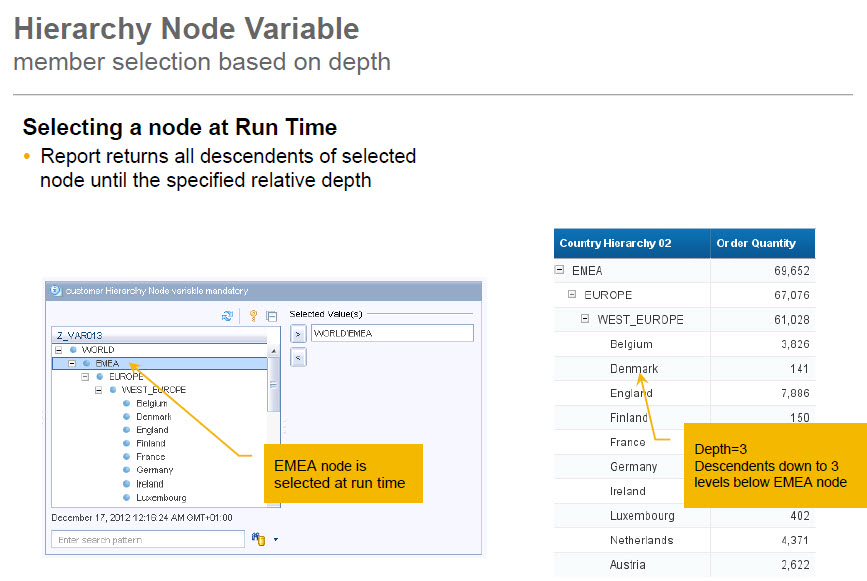 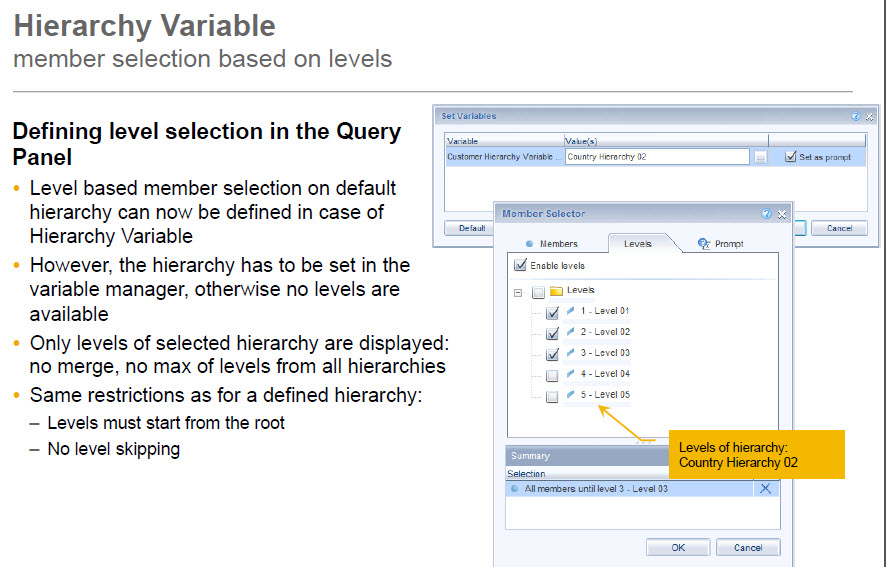 Figure 10 shows the same is true for hierarchy variables; you define how many levels in the hierarchy and at run-time the user decides to run a different hierarchy, the report leverages the same depth 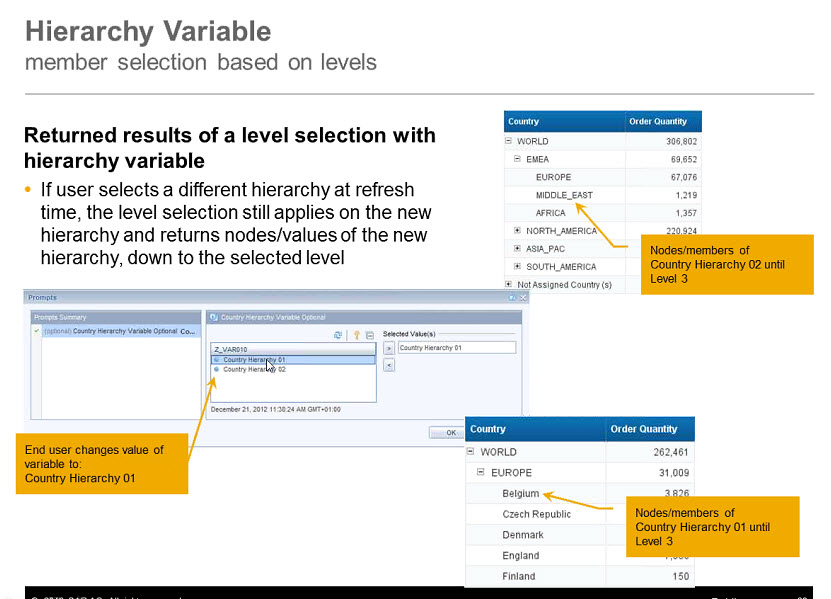 Figure 11 shows an example of how 3 levels are kept even if a user sets a different hierarchy.

Relative depth to the member selection has been added to BI4.1

To be continued…more in another blog.

Now, for a related  ASUG advertisement 🙂

SAP BusinessObjects BI 4.1 with SAP BW and SAP ERP – Everything You Need in One Day

Join SAP Mentor Ingo Hilgefort for this pre-conference session.  It includes some exercises with BW on HANA.  Register today

Thanks for this overview. About the performance improvements in Webi 4.1, did they shown any real figures/proof of this? For example the loading time for 1 million records in 4.0 vs the time in 4.1 over the BICS connection?

Only what was discussed in Figure 6 re: Web Intelligence performance.  He said alot of it depends too on the number of hierarchies, variables, etc. in the design.

Figure6 - is it possible to give details on (*) see appendix for details on BW pre-requisites?

I am interested in knowing specifically the BW 7.31 pre-requisites?

Thank you for reading in detail

Thanks for your response. But the note doesnt seem to have any details regarding the BW version pre-requisites in it.

Is it just this note or is there like a bunch of other notes that explains about other improvements in BW7.3 as a pre-requisite for BI4.1?

Rahul - for some reason the reply is not letting me paste a picture.

This is the only other page in the Appendix, source: SAP:

To fully benefit from the optimizations, you need SAP NetWeaver BW 7.30 SP08 or BW 7.31

SP05, and the following SAP Notes:

1750788 – Meta data extension (contains a collection of extensions and fixes)

(i.e. are only in the fix filter of the query).

1776688 – Optimization for reading hierarchy nodes, too many hierarchy levels are read

1817482 – This note adds the feature for the Design Time API to choose whether members should be read initially or not. By

default, there are not read; this provides a performance enhancement for SL.

Thank you so much. I was looking for this exact information.