Not all BRICs are the same. Why India is more attractive for western retailers in the long-term ?

We have all heard of the growing consumer class in BRIC (Brazil, Russia, India, China) countries and their importance to western retailers.  What is not well known is the relative differences in size and growth between these markets. Looking at some data recently, I was struck by the relative attractiveness of India for any retailer planning for long-term growth.

First, a little bit of historical perspective. Through most of the first 18 centuries, and as late as 1820, China and India together accounted for 50+% of the world GDP. Industrial and technological breakthroughs in late 19th and 20th centuries saw the rise of the United States, UK, Japan, and Germany almost entirely at the expense of China and India. 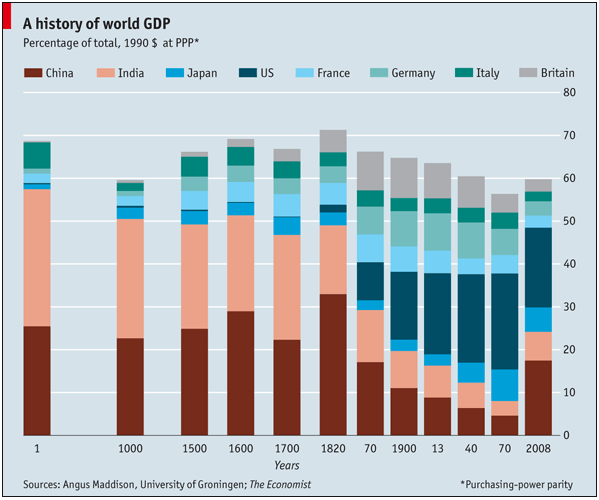 We are all aware that the pendulum is swinging back – it’s only a matter of time before China and India regain their historical economic prominence as is already happening and evident from the chart above.  An important thing to note though is that while China has nearly caught up to its historic ~20-25% share of world GDP, India still has long ways to go. If history is any guide, you can bet that India has some catching up to do and will grow much faster than China.

This is indeed confirmed by the analysis below from PWC. In terms of PPP (purchasing power parity – that is the GDP measure most relevant to retailers because it gives a better picture of the purchasing power of an economy) – it comes as no surprise that by 2050, the BRIC countries will be 4 of the top 6 economies in the world. But what might come as a surprise is the fact that from 2011 to 2050, India’s GDP is projected to grow almost 8 times – that is ~ twice the 4.5x growth of China and much higher than ~3x growth in Brazil and Russia. Combine high growth with the fact that India is also projected to be a large enough economy (third largest GDP with almost 4x the GDP of Russia and Brazil) to move the needle for any business – that is something for Retailers to get excited about.

But that is not all.

While China has already done a commendable job raising the earnings and purchasing power of its citizens (i.e. it’s middle class is already well established), India is just getting started. Consider the analysis below from Deloitte – starting from near zero in 2009, Indian middle class will account for ~1/4th of global middle class spending by 2030. Not only is that the highest share of any other economy, the growth percentages between now and 2030 are simply staggering. 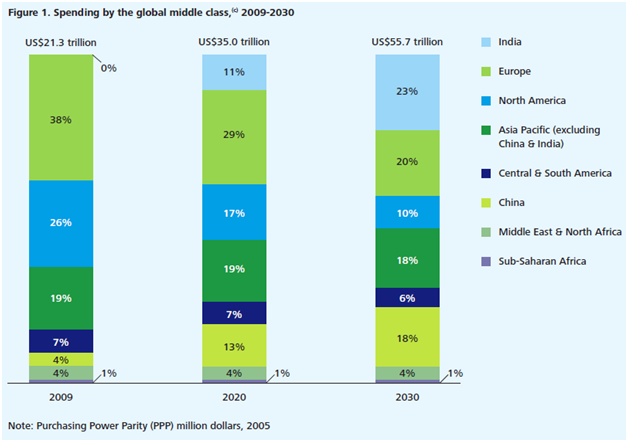 Finally consider this – organized retail accounts for a mere 5% of retail in India compared to 20+% in China and 85% in the United States. Retail sector is in dire need of foreign investment and the government recognizes that. Political bickering has kept a lid on opening up the market to FDI in any significant way but it’s only a matter of when – not if.

To  recap, all studies suggest that Indian economy will be one of the world’s largest with an affluent and huge middle class. Whereas China is well on its way to taking its historic place as an economic powerhouse, India is much farther behind. While that is not good news for its citizens or for western retailers who had been eyeing India and have been frustrated with their forays in the country so far, it is good news for any retailer looking to find meaningful growth for decades to come.  While all BRIC countries present growth opportunities and China in particular is a no-brainer for the foreseeable future, for its vast and largely untapped potential – all retailers need to be chalking out an India strategy.

Thanks Pushkar. I enjoyed reading some of your blogs recently - some deep thinking happening there.

Amit, nice analysis!  You make a good case for India according to impressive GDP/PPP growth projections, and underlying foundation coming from increase in the middle class (spending) and business potential (especially huge upside for organized retail).  And even though I am usually wary of projection going out 20-30+ years, the case for India remains attractive indeed.

I believe that policies around Public Private Partnership (a different PPP) and willingness to reinvest significantly into infrastructure (8-10% of GDP) will provide a needed platform from which India can achieve those incredible growth numbers - over the long term.

Separately, it's interesting to watch Walmart's plans in India with their joint partner Bharti and how regulatory uncertainty can play on decisions to apply for and open stores (at least in the short term).

Again, love the analysis and I think Walmart, Tesco, and Carrefour would agree with you but may wonder about the right timing.

Hi Mohamed - Thanks for the comments. You are absolutely correct - they don't call India "babu-raj" ("bureaucratic rule" in Hindi) for nothing. The bureaucratic hurdles and political wrangling are enough to throw any forecasts down the drain. To add to the uncertainty, successive governments are known to roll back policy measures that previous one may have put in place.

As you state, the timing of entry is a critical factor. The early entrants face lot of uncertainty, but hopefully can turn their initial investments into a competitive advantage vs. late entrants. For example, there is a huge need for investment in food supply-chain and storage (in such a poor country up to 50% of the food is wasted) - so those who commit to this investment can in return perhaps negotiate terms that provide them a competitive advantage for some time to come.

At the end, I think the prize is large for winners and hence all retailers need to think about the opportunity as a strategic option which they should definitely consider an investment in.

India needs politcial stability and a review of the "excise regime" to get to the 2050 figure in your diagram.

Totally agree Warren. But then in such a diverse country, I don't expect much more political stability than what the country has enjoyed lately (same ruling party and prime minister for almost 10 years). What India needs more is a wake up call to not stand still. The Balance of Payments crisis in 1991 was one such wake up call, the reforms introduced then were critical to where India is today. Maybe the currency crisis happening now will be the next wake up call.