In my last blog, I gave a quick introduction about the new tool –  “Mass Processing” . In that blog, I didn’t go much detail into the actual solution. I am sure, after reading that blog everyone must have got a “good” idea on how this new functionality is going to be(which has SAP’s documentation too 🙂 ). In this blog, I shall get into more details of “What’s new in HCM Processes and Forms framework to accommodate this new solution”.

Being from strong Technical background, I am not the only one who hates to read “Documentation” before exploring any new functionality; but I mended myself recently after wearing “Functional” hat to read and understand(at least try) the documentation first before diving into any new functionality. Though I still feel exploring new things by technical way(by debugging if something is not working, looking into SLG1 and ST22 traces, hunting for new components, searching for OSS Notes) is far interesting than reading the boring documentation 🙂

Controlling my excitement, I opened the super duper HRASR_DT transaction to see that a new form type – “Mass Form” –

Before I start exploring this functionality in detail, I tried hunting for SAP delivered “Mass Form” Form Scenarios and realized that we don’t have anything provided by SAP. I might be wrong, since I didn’t do the Forms Reconciliation after the FP3 upgrade.

I went ahead creating this test form scenario and realized that after a lot of exercise, HRASR_DT has put down some weight by reducing lots of navigation nodes 🙂 This actually hints me that this new functionality is not as something that is similar to existing HCM Process and Forms type functionality. 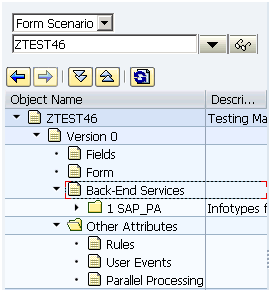 At the fields node, I found a new button – “Download Template”  that allows me to download the fields  in a excel file – 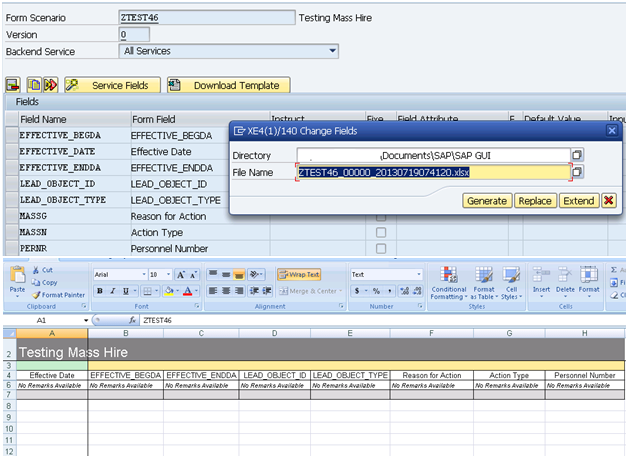 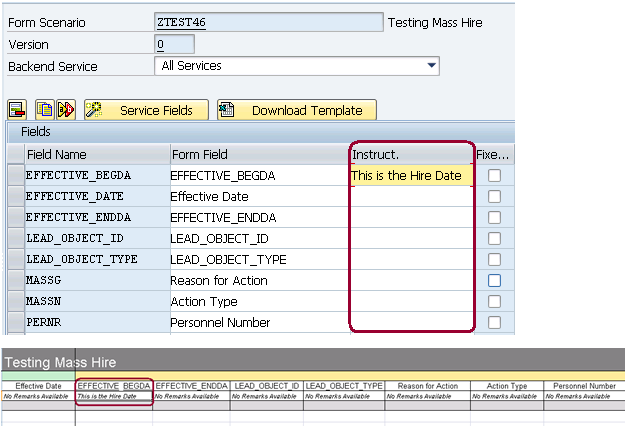 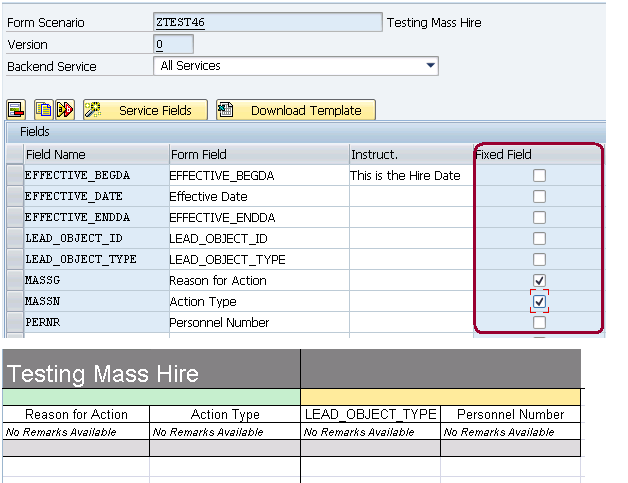 “Field Sequence” column allows defining the sequence of columns in the “Forms Application”. A new form type got added which looks very similar to “List form” of FPM Forms (with minor differences) – 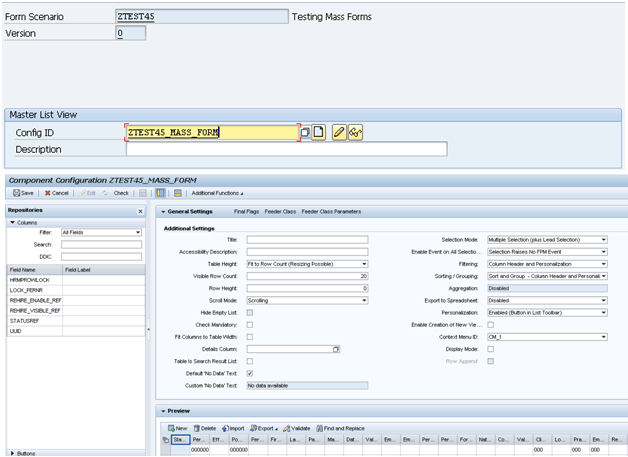 Here is the final look and feel of our new application –

This new functionality from my perspective is really good. Now, I can add any number of infotypes in my Hire configuration without any development and do the mass processing in ease. Also, the functionality to export to excel and import from excel is also very good. I was under assumption that this tool would work for any “Action”(not only for Hiring / Rehiring), but my assumption had been wrong. Using a simple prototype, I tried updating Communications infotype alone without with any performing “Actions” for two persons(passing in Personnel Numbers), it didn’t allow me to do so. This tool would be absolutely powerful if this framework works for any infotype with and without actions(I might be wrong too since I didn’t invest good amount of time exploring this tool 🙁 and I strongly believe SAP could have provided an option to use this tool for any action or infotype update ).

During my research I came across a cool SAP Note#1835253 – Mass Hiring Cookbook which might help you also !

Hmmmm...the conclusion is good.. and yes SAP should giv us soome flexible framework that can be extended to any infotype.

Thanks for the feedback Moosa,

Yes, I do agree that this tool should be used for any infotype without forcing us to do any kind of "Action" as it's in current HCM P&F as of today.

Again, I must not explored enough to validate this point very clearly(There could be a BADI which could switch off the "Hire" Action functionality) ! So I should be neutral till I realize the "Truth" 🙂

I'm currently working in a system in Enhan. Pack 5 and P& F with Adobe.

With this configuration in the Mass Process the system generates separate process instances for each of the employees included in the mass processing.

My question  ( seeing that you have tested the last releases - HR Renewal ),

Is this Mass Processig  ( created with HR Renewal 1.0 FP3 )  supports the 'Mass approvals' ? . In other words that the system only generates a process instance for all the employees included in the mass processing ?

Here is your answer -

For Mass Form type forms, we can only define "Form Scenario" only. We don't have to define a process for these Mass Forms. So the whole concept of workflow/approvals never come into picture.

Reason : Start Application of Mass forms accepts the Form Scenario only, but not the process. So I had to infer that there is no implication of Process for Mass Forms.

Thanks Raja for your answer,

Seeing that 'my scenario' is not contemplated with the Mass Form, do you know ( by any chance ) if this scenario - mass approval, could be solved in another way of is in the scope of an HR Renewal Release ?

Thanks again for your help,

For now, I am not sure if we can handle your requirement through any other way. As of today, the whole application has been built in a way that no workflow process can be wrapped 🙁 around these Mass forms ! Yes, I do see your requirement as a common requirement, so I too wish if we can wrap a workflow(that too with a precise control by having an option to handle approvals via Mass approvals or Individual approvals) around these Mass forms(after making these forms truly mass forms 🙂 currently these mass forms support only Hire/Rehire scenarios) in future releases of HR Renewal !

Hope SAP is hearing our wishes 😉

I tried this new functionality out - but I always receive an error when I want to import the Excel. I receive "Error during importing; check the Excel format.

Did anybody had the same problem? Do you have a solution? I tried several format configurations for the date - nothing worked.

Thank you for your input!

Can FPM form (W) based processes be developed in HR Renewal which allow the mass start using application "start process for multiple employees" (asr_mass_start_process).  I tried developing a PA process with this process type as show in the picture below. The process was not assigned to any process group. But the process is not appearing in this application.  Is there any other new application in HR renewal for this.  Similarly how to enable a PD process with same start step settings.

Congrats for your blogs, are very useful for newbies like me.

I don't know if it is the correct place to throw some technical questions. So, kindly let me know if I should to write in another point.

I'm trying to replicate your example by myself, everything ok until I have tried to launch my test process. Wich application should be launched? I have found ASR_MASS_START_PROCESS but there is a previous employee selection that not fits with your last screenshot where it is showing your process screen.

Ok, I answer myself.

Up to now there is no possible to do Mass process in FPM Forms, only Adobe forms are supported.

P.S: Thanks Chris for your documentation link above...

I believe FPM forms are supported now...just saw a OSS note about it. 😉

"Shut up and take my money!", hahaha.

Please Do you know how we can use mass process with FPM ?

its working with me for fast entry , but when i attached it to workflow , i have to license for adobe to open work item:(

I have only used mass processing as fast entry, without any workflow functionality behind. sorry I cannot help you.

No problem , thank you 🙂

Hope i will get help form SCN Experts.

The "mass processes" tool/feature has gotten a lot of updates in "recent" times. The orignal was fairly worthless..I mean, it worked....but not how anyone doing mass processes in real world scenarios were doing it (*hint hint* spreadsheet!) haha Glad SAP is making in-roads there.

Thanks again for taking the time to put this together!

How can i attach workflow to Mass form ?

You should activate workflow event for WS33700157.

Am using Mass forms to develop process for transfer employees , every thing fine  and i click validate without any errors , but when i click submit all