The objective of this article is to summarize the main differences of UI technologies like Business Server Pages and Web dynpro, in order to check the pros and cons when deciding on which technology to use be used by developers for the required project. The table at the end of the article summarizes the advantages and disadvantages of both UI technologies.

Web Dynpro is the follow up of the classical Dynpro technology. It is not a direct competitor of BSP or SAP ITS.

Web Dynpro is a programming model, which allows to design standard UIs very quick. Everything that can be designed without coding is designed without coding. On the other side, the freedom in designing the UI is restricted. E.g. it is not possible to include client side JavaScript in the generated pages. The generated code is not restricted to HTML. However, Web Dynpro  recently provided  UI  elements  that  allow integration  of  custom  HTML,  custom  JavaScript, and custom   CSS   into   a Web   Dynpro   application. The relevant   UI   elements are HTMLIsland, HTMLContainer and HTMLFragment.

BSP programming model offers to include all browser supported techniques in the generated HTML pages. However, the construction of a BSP UI takes a lot more time than the development of a WD UI, since there is no declarative approach. Thus, BSP can be used for “free-style” programming.

Web Dynpro is implemented in Java and ABAP. It is suited to generate standardized user interfaces (UIs) using a declarative approach, resulting in a minimum time effort to realize Web applications. In the ABAP area, there exist two other programming models, SAP ITS and BSPs, which are still supported. The developer should be prepared for questions, related to the pros and cons of these three technologies.

SAP ITS will be used in to future to map existing Dynpro-based transactions to HTML pages. This will be necessary, since it is impossible to convert all Dynpro-based transactions to Web Dynpro in an acceptable time frame. SAP ITS is the only Web enabling technology. For all other technologies, the application has to be rewritten completely! Cons: Long response times, since an additional time frame is necessary for the mapping between HTML pages and Dynpros (in both directions).

Web Dynpro is the technology SAP uses for developing all future applications. Existing Dynpro-based transactions will be converted. Web Dynpro will replace the old Dynpro step by step. Cons: Web Dynpro does allow to develop of standardized UI very quick, but it is not the right choice for the development of fancy Internet-like UIs. This is because the UI is rendered from meta data, so the developer cannot place his/her own JavaScript code in the rendered HTML page (unless using HTML Island and HTML Container). Web Dynpro has to be embedded in the portal environment to be able to change the application design.

BSP is the ABAP technology for “free-style” programming. Everything is possible in terms of RIA (Rich Internet Applications). BSP can be compared to JSP on the Java side. Cons: Standardized UIs are not supported and everything has to be coded (Navigation, UI…). The development of a BSP-based UI is much slower than the Web Dynpro development. Because SAP develops standard applications with the need to have a standardized and consistent UI, BSP will not be used by SAP. However, BSP is the only of these three technologies, that allows to design sophisticated Internet applications based on ABAP. Thus this technology will be very interesting for the customer also in the future. 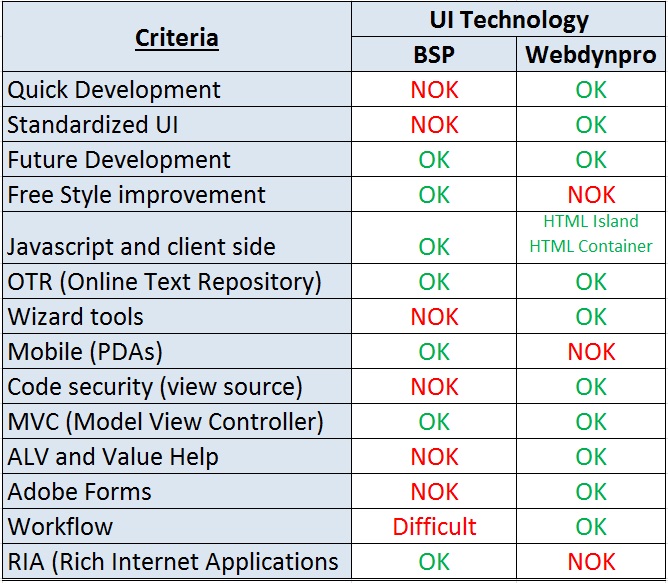 using HTML Island Control in WDA also enables the developer to use own client side javascript.
Best regards,
Michel.