What Businesses Can Learn From the MLB All-Star Selection Process

The Major League Baseball All-Star game started 70 years ago in 1933 at Comiskey Park in Chicago, Illinois. Since then 1,676 players have participated, 75 percent of whom made an All-Star game three times or fewer in their careers.

What does this tell us? A breakout season from a player is not necessarily rare, and greatness should be defined by longevity. It also reveals inefficiency in the way All-Stars in baseball are chosen. Dissecting these problems and applying them to business can help us put how we run companies under the microscope as well.

A big problem is that managers now choose some players for the All-Star game. Since the winner gets home field advantage in the World Series, managers may not choose the best players, but instead will pick a player who is “hot” right now. They are swayed by a recency bias that a certain player has played well in just the last week or month, or is a better role player. Sometimes the manager makes an emotional decision because he knows a player well. As has become clearer and clearer with baseball, crunching data is usually going to provide a better look at value for a team than a manager’s gut instinct.

Recency bias is a common occurrence in market decision making. As this New York Times article explains, consumers swayed by the recency bias should try to put away their feelings about things that just happened in favor of a holistic approach to the ebbs and flows of the market. In the long run they will do better financially.  Managers—both in the MLB and business—should also follow this advice.

Furthermore, the bandwagon effect of MLB voting means that the fans of larger markets and more popular (but not always more talented) players can sway who gets into the game. Quite frequently the bandwagon effect manifests itself in business by resulting in a flock or herd mentality to popular trends, decisions in the market, or general business theory. Often the best business play is a counter-intuitive one because the rewards can be so much higher. While in business the reward is money, in baseball it simply means the All-Star game becomes a grander version of prom night.

Finally, while making the game is a major accomplishment, a breakout season may not be a harbinger for future successes. 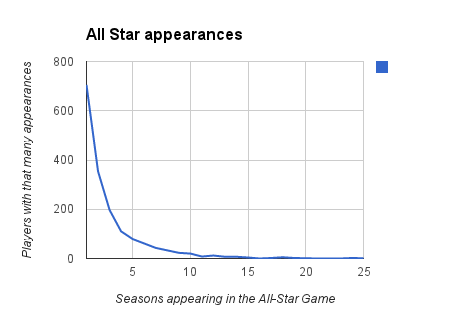 This graph shows a long tail of the most elite baseball players in the history of the game. The front part of the graph shows 705 players being one-time All-Stars, and only one (Hank Aaron) to make it 25 times as a player. The best marker of greatness in a player or executive is value over more than a few seasons (or quarters), which is why names like Hank Aaron, Mariano Rivera, Willie Mays, and Mickey Mantle can only be found in the tail end of the graph above. Some of the players in this year’s All-Star game will never play in one again, and few will be in the game five years from now. Similarly, the business of being a corporate luminary will be very different in five years, but the best will still be there.