After the exposure to many standard ALV reports for masterdata , it is seen that the clients or end-users expect similar reports for Catalog-Profiles, Code Groups and Codes, so that it will be easier to search for such available profiles which suit to their requirements and they can make use of the same, saving lot of time, effort and data duplication.

For big organizations, comprising of several units where SAP-PM is adopted, this requirement is very common.

We do not have such ready report/s provided by SAP.  At the same time, SAP has given good tools for Functional persons to generate reports on their own.

Let’s see what we are going to achieve in this article: 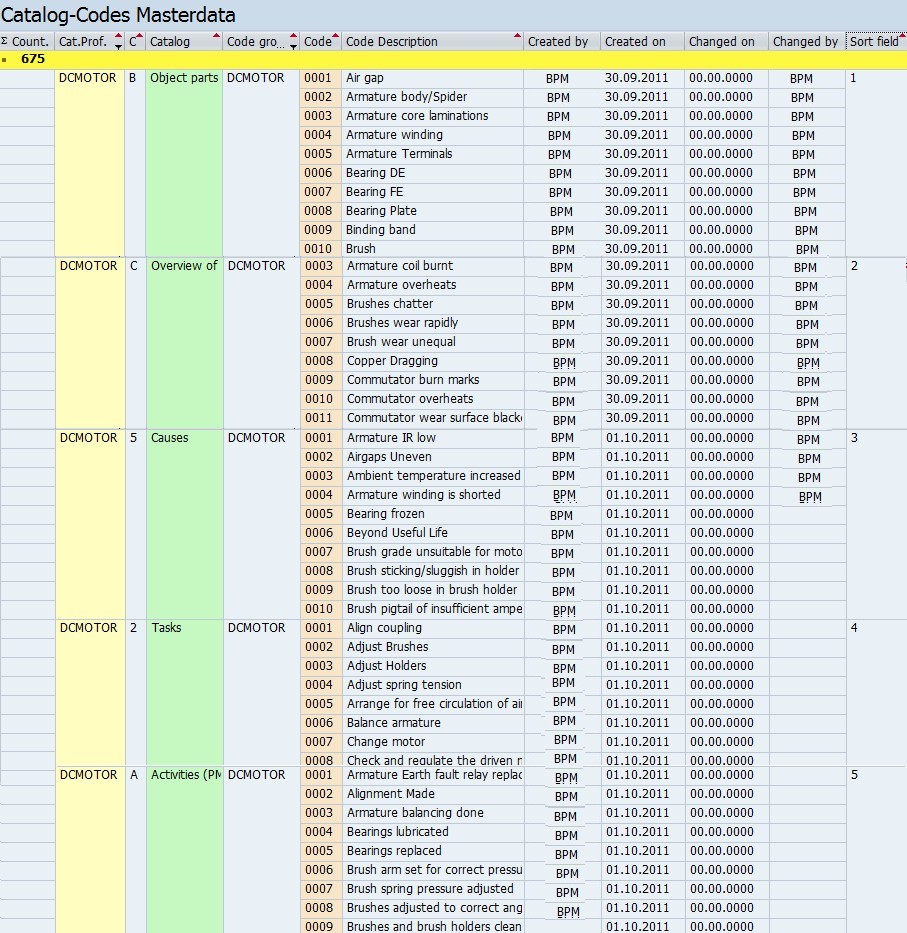 DO you find it is relevant and useful to you? Then here is how to make it !

Step 1. Create an Infoset as follows

– Select the required fields from tables (left) to the Field Groups in the right. (Drag & Drop) as shown here. 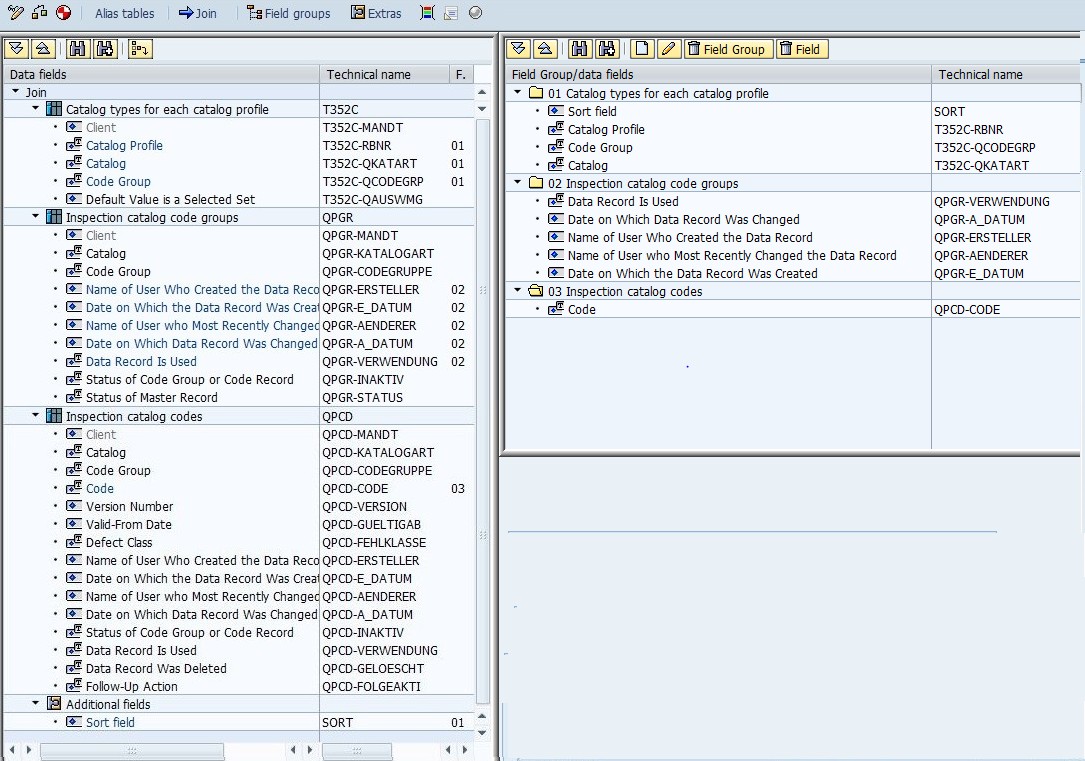 In order to arrange the Calatogs in the sort order of B, C, 5, 2, A  in the ALV screen, a user defined field ‘SORT’ is being created in the following section.

For this click on the  ‘Extras‘ tab on the application toolbar to have Extras window on the right.

The specification of field ‘SORT‘ while creating

Now, keep cursor on the ‘SORT’ field (Red Boxed area) and click on the ‘CODE‘ icon (Green box), and write the following code.

Making of ‘Selection screen’ of the report

Go to  ‘Selections’ tab (next to ‘Extras’ tab) and create the select-option.

Here we are creating the 2 selection fields shown in the 1st image of this document. i.e., Catalog Profile’ and ‘Created By’.

For this click on ‘New‘ icon in this tab and create two selection fields ‘CATPROF’ and ‘CRTDBY’ one after one as shown here.

Save and Generate the Infoset.

This completes the job in Infoset creation (SQ02).

Come to initial screen of SQ02 and assign this infoset to your usergroup. (User group is created through SQ03) 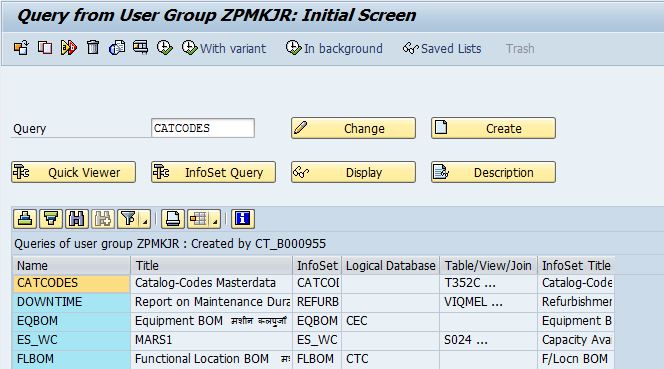 Select all the 3 tables appearing here used in Infoset and click next.

Select the fields required for display in ALV. 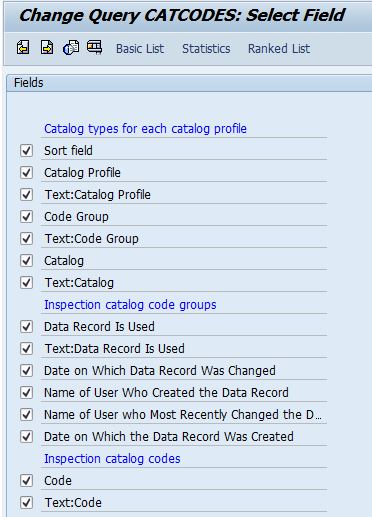 (If this screen does not appear go to ‘Settings’ menu, check the ‘Graphical Menu Painter’ option in the ‘Settings’ option) The red box list shows the Field selections you need to appear in the output.

For column coloring you have to drag & Drop colors from tool box to the corresponding field as shown by the Red arrow on the right.

That’s all. Now You save the query and return to the initial screen. Execute and test.

To have a Tcode for the program you’ve just generated

In the SQ01 screen 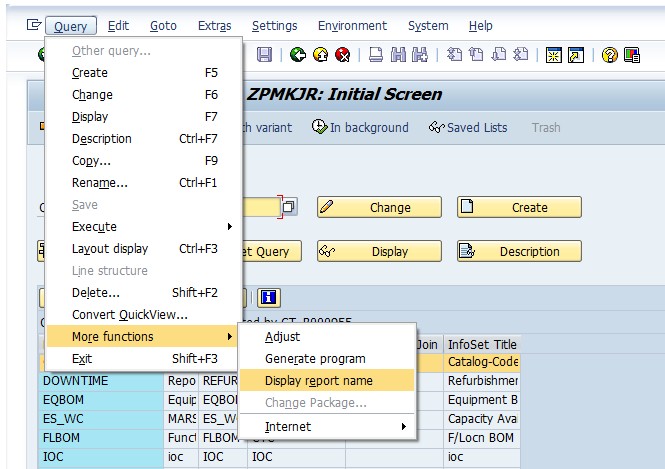 to get this result.

Copy this string (Report name), Run SE93 in Development Client and create a Z-Tcode with desired name using the above program name.

Transport the request to Production.

Now the report you’ve made is operated using the Tcode you’ve created.

To my end-users, this report was very much sought and proved very useful by them. They can now easily search the profiles available in the system (made by users in other shops)   for their similar equipments. This report has got many such uses.

The making of this report here has been demonstrated using ‘Standard Client ‘option in the SQ02 (Environment –> Query Areas), so that no transport needs to be done during creation or modifications. However as explained, the Z-Tcode has to be created in Workbench Dev Client, once.

Also, it is aimed through this document, the beginners in the Infoset query area to be benefited without referring to other detailed documents on SQ03, SQ02, SQ01.

Hoping it is useful to many.

Thanks for sharing another useful document.

I tried this document. When i am generating the infoset. error getting SORT not defined . Can you please tell why this error is getting . When i am defining SORT as data type system giving one more error already exist.

It is difficult without screen-shots to judge what is happening.

You may do one thing.

2.If this too is giving problems, then Ignore the 'SORT' part of the document.

You'll be able to complete the exercise.

Then you try to add SORT part and investigate what's happening.

Good Presentation... Thanks for sharing.

Tahnks for sharing this query.

It is very useful.

Thank you giuseppe for recognition,

Excellent work.I will definately try it and let you know.

Thanks again Swapnil, Am sure you'll do it.

One of our clients uses an Excel spreadsheet - I created this Query and they are happy that its online and now inside SAP.

That gives a great satisfaction. I am sure you'll agree that this document deserves some acclaim (some rating / like) from your side.

Wonderful document i will try and let u know

Helpful document. thanks for sharing. 🙂

good day to all.

i am new here, can anyone give me a standard list of catalog profile? our company is about to start the SAP this coming year.

object, fault codes, causes, tasks and activities is all i need so please i need help out there.

Present posts or threads are not the right places for posting your Queries. Please post your query as a new Discussion, by clicking on Create --> Discussion as shown in th picture below. 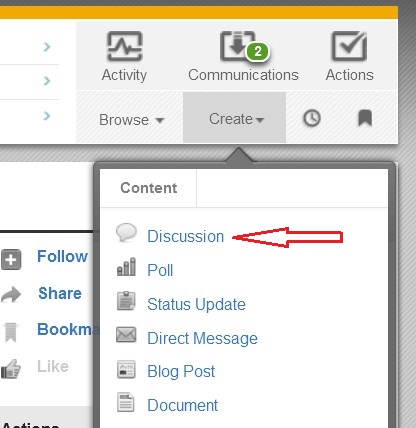 Thank you Nicolas for your time and review 🙂

thank you so much.. this query made my life easy.. though i have some issue.

i cant group the profile. How to group and get the report layout as same as in your screen shot.

Once again thank you so much..

Please explain what is meant by grouping of Catalog Profile. If it is how understand then, you export

this report as excel file and do your sorting exercise.