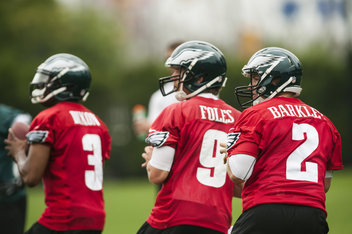 One of the hottest debates heading into this years’ NFL season is centered on the Philadelphia Eagles, their new Coach (Chip Kelly), and more importantly – the Quarterback controversy that’s unfolding between Michael Vick, Nick Foles and rookie Matt Barkley. Chip Kelly brings a breath of fresh air to an Eagles organization that was in dire need of it. From showing a pulse at press conferences to pumping up the volume at practice, Kelly is exactly what the city needed as the figurehead for the Eagles. Add to that, thoughts of a successful draft concurred upon by fans and analysts. Seemingly, the sky is the limit for the Eagles and the city is eagerly awaiting the start of the season on September 9th against the Washington Redskins.

But hold it right there! Before booking that trip up to MetLife Stadium for Super Bowl XLVIII, remember, the Eagles only won four games last year. For a team with nowhere to go but up, there are still plenty of imperfections and the main bit of mold that needs purification is the QB controversy and eliminating Mike Vick from it.

So in honor of the image to the upper-right and the foreshadowing it represents, here are 7 reasons why the Eagles are better off without #7 in the picture:

No one expects Vick to resign after the season and no one expects Vick to remain the starter during the season. I don’t even expect Vick to be the starter in week one. Here’s to hoping I’m right, long term success depends on it. As an optimistic realist, a perfect season for me doesn’t have Mike Vick in it and it starts with a bunch of painful losses followed by a team on the upswing to end the year – still securing an early draft pick as the Eagles build for the future and target Super Bowl 50 in 2016 at Levi’s Stadium in Santa Clara.

Comment if you agree, tell me I’m crazy if you disagree and fly with me @airsomers if you bleed Eagles green.

You may also like: Future of Baseball Hinges on Technology