Note: This page uses syntax provided by the ABAP 7.4 release, for info on that check out the excellent Blog written by Horst Keller here on SCN.

Parallel processing is generally achieved through a series of different methods in standard SAP, however, each tend to have various drawbacks which often make it annoying to work with and usually not worth the effort for every day uses. This particular topic has been one of constant irritation for me especially when coming from other languages where parallel processing is common place. Asynchronously iterating through loops of slow processes is a serious pain and even more so when you care about the results or the completion of those processes such as a fork / join style process.

The following are the standard ways of doing this:

Calling the function modules with STARTING NEW TASK does not handle errors and you must custom build the error handling… A common error occurs when there are insufficient resources to start a new task. The standard documentation explains this in detail but the summary is that there must be at least 2 work processes available.

When calling STARTING NEW TASK there is no way to know that your task has completed other than the CALLING method | PERFORMING subroutine keywords at the end but they have their drawbacks again. You cannot call the method if the current calling method that calls the function ends. If the calling method or program ends then NO callback will occur so this means you must manually WAIT UNTIL either time or a variable that is set inside the return method is flagged. This is a pretty inconvenient thing because we dont want to manually code these wait terms any time we want this functionality and we gain little from this if execution of our current method or program ends since good OO coding practices mean that our calling method is usually simple and does not have a lengthy runtime, we would rather store a result and retrieve it later or have the callback always occur no matter what.

In all of the above the amount of code required to simply implement the solution is irritating and not exactly enjoyable to work with. In this page I will discuss a new solution that uses objects to allow developers to implement RUNNABLE or CALLABLE interfaces which can then be executed by custom parallel processing objects.

Important Notes to Keep in Mind

The following objects are custom built by me to achieve the outcomes mentioned in the above section. You should not attempt to change the code yourself without discussing with me. It is not efficient to always use these objects just because they process in parallel. You the developer should consider if your process requires this or not and you should consider the recommendations about which object to use for your scenario. The following technical considerations must be thought through:

Currently there are 4 objects that can be used as part of this framework. All of the objects exist in the ZPRC_OBJECTS package and the following are the key objects which implement the parallel processing.

The following image shows the simplicity of executing each type

The runnable interface, ZIF_PRC_RUNNABLE, must be implemented for any object that you want to run as a background job or isolated / managed task. The interface simply has one method, the RUN method. This method will be executed when the parallel process is started.

If you need to pass parameters to this, its not possible. Instead you must construct your object and set parameters on the constructed instance, then in the RUN method you can you those instance attributes. Due to this it is usually a good idea to call a method inside the run method that you could otherwise call from a normal instantiated object which then allows you to execute the same code in parallel or in serial depending. Remember, however, that any Object references in the class internal member variables must implement the IF_SERIALIZABLE_OBJECT interface or it will be nullified during serialization prior to executing on the parallel process.

As literally any code is valid in the RUN method there should be no requirement for me to display an example of this, however, remember the shown class as it will be used in following examples.

The callable interface, ZIF_PRC_CALLABLE, must be implemented for any object that you want to run as a future task. The interface has the following methods shown below. The CALL method will be called when the callable object is ran.

The same restrictions and considerations as with the above Runnable object apply for the callable. The return type is specified as a literal and must match a legitimate abap type, dictionary member, or object. In this random example a string is the result type.

The class ZCL_PRC_ISOLATED_TASK is the simple example for parallel processing. The following example contructs the runnable and the task to process the runnable, then starts the task.

As shown previously this can be simplified with the following (thanks to the 7.4 release changes)

A delay can be used of up to 45s, though it should be noted that this should be limited where possible as the RFC connection for this waiting task will remain open although the process is not running there are limited connections available.

Note: a literal is used for delay because it allows the WAIT UP TO statement to do fractions of seconds. However, each wait call causes a work process switch which is additional overhead and wait periods less than 1 second are generally not recommended

However, there are additional features, such as the maximum work processes for use can be set for a user.

Furthermore, we can also wait for the completion of these processes by using a barrier

Here is a full example

The class ZCL_PRC_FUTURE_TASK is not constructable and must be created by submitting an object which implements the callable interface as shown above. The ZCL_PRC_FUTURE_EXECUTOR is used for this purpose and the primary use of this is to get a result which can be retrieved at some point in the future. The below simple example illustrates this in long form.

Now things are starting to get interesting!

Again we can do this in one line thanks to 7.4

This strategy can be used to dispatch pieces of work in a loop where we want to put the results back together in a specific order. Imagine for instance a scenario where we are doing some processing in each iteration that depends on the results of the previous iteration. We can still process in parallel as long as we put the pieces back together in order…. The following example simply shows how we can process and rebuild the order for example, although it is a meaningless example. The concept can be used to process complex time consuming units of work. The example simply multiplies the input index by 10. Note: the above example does use an internal collection object, ZCL_ISD_TABLELIST and since I don’t wish to do another example you would need to use a different collection. You could use ZCL_PRC_COLLECTION provided if you wish noting that the syntax will vary as it does not use a next( ) method and instead… or of course an internal table

Note: This class requires the S_BTCH_JOB authorisation with an action of ‘RELE’ otherwise the jobs will be stuck scheduled. The unfortunate restriction is forced by the standard functions for submitting jobs. Check the following link for more details

The background job is reasonably flexible and can have a specific schedule. Note that they can never be re-ran once completed, failed, successful or otherwise. These jobs run one time only ever. The following example shows a job with a schedule to run 60 seconds after the current time with a custom job name

If you are planning to use the above background job and you want it to be on a specific Job Server Group, then you should create a subclass of the above and set the mv_group variable in your constructor.

Firstly you will need the files which can be found in a .nugg file at the below link. If you do not know how to use a .nugg file then search for that, and look for the program ZSAPLINK to import the .nugg

You can find the most recent nugget at the folllowing location: 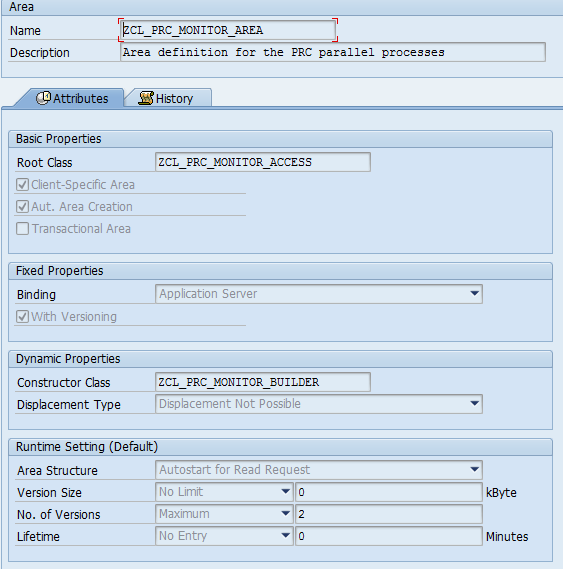 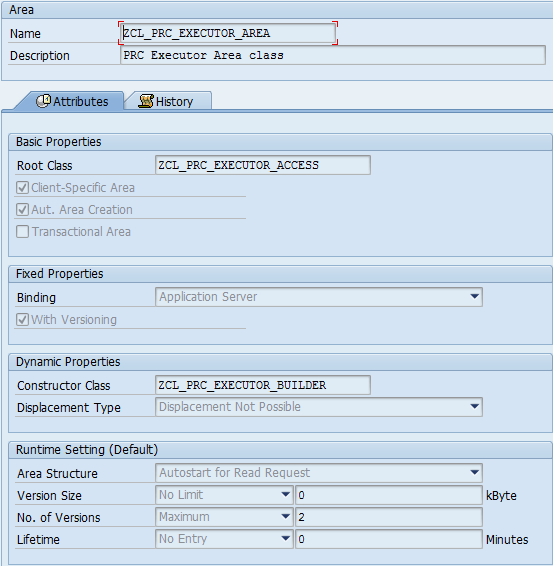 When using any of these objects it is your responsibility as a developer to appropriately use these them where it makes sense and consider all of the points listed in this document. It is important to correctly handle all error scenarios and exceptions as well otherwise the errors will generally originate from the PRC objects as they throw PRC exceptions in some scenarios to allow for some cleanup to occur(for the managed objects).