Using SAP Lumira tool and Workforce data file, I have created below user story and reports.

1. HR department would like to know distribution of annual salary per Occupation further breaking down to Employment type and Pay Group. Salary Distribution is color-coded as per pay Grade.

2. Assumed that, higher the pay grade, Annual Salaries are higher, however after developing Area Chart of Employee’s Annual Salary vs Pay Grade, it was noticed that pay grades in middle ranges 9 and 10 having higher salaries then further pay grades. Pay Grade 9 employees have highest salaries. Male in IT Staff has highest Salary. So, the Annual Salary is trending with Occupation and Pay Grades. 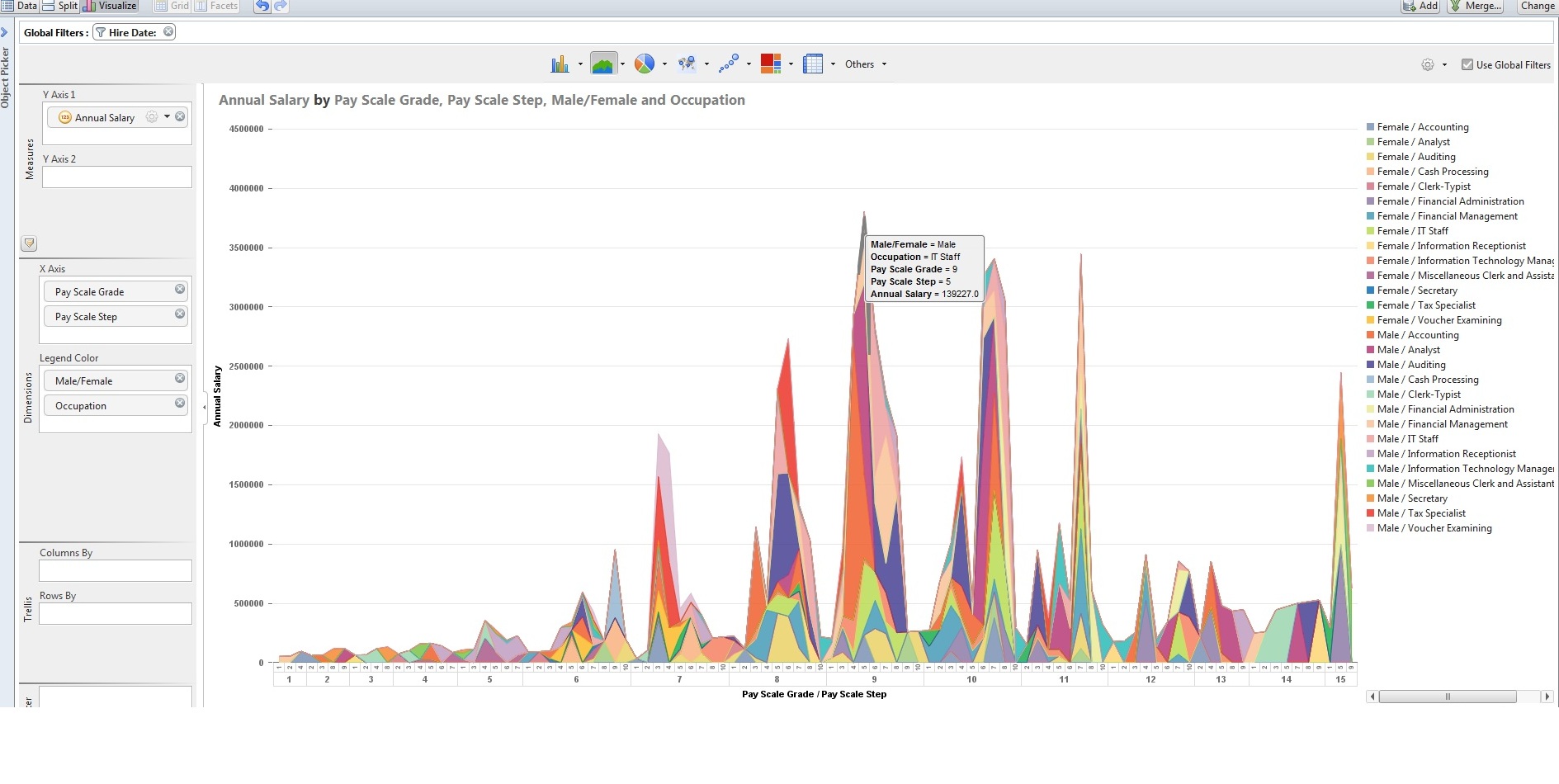 3. Retirement Contribution has seen Linear / somewhat exponential as per pay Grade.  Majority of employees in Pay Grades between 8 – 10 have made contribution in close range. Even though person who draws highest salary has made average retirement contribution.

3.2. versus Employee who has highest Annual Salary has made average contribution.

4. Doing further analysis of Annual Salary trend, We created a Heat map of Annual Salary per Occupation vs Pay Group. One issue which strike to us was Male vs Female Salary ratio. For most of the Occupations, there was a good amount of difference in Salary range of Male vs Female. Male are earning higher Salaries, which requires further analysis and root cause. If it is related to any HR Policy, we will take appropriate action.

4.2 In order to do further analysis on Male vs Female pay groups for each Occupation as well as highest pay per pay group, below chart has been built.

5. Predictive analytics – For each occupation – Forecast of Increase in Employee count and Annual Salary Total, for next 10 years 2009 to 2018. Below chart showcases increase in ratio non-exempt employees in most of departments and steady growth/decrease of exempt employees.

Maybe a little narrative between each visualisation example, telling us the story, what you've identified etc.

I can see the images in Firefox, but not Chrome

Thank you for your feedback. I have explained scenario for each visualization, I am planning add more visualizations and then create a video, I would be able to be more narrative in video 🙂