All SAP versions which support ALVs

Kris Donald is an SAP technical consultant working for L&T Infotech, Mumbai, India. He has worked in SAP since September 2006 and his experience spans various technologies primarily ABAP

ALV reports are usually run in foreground. When the data selection and processing is large, this can lead to time outs. Execution in background does not allow further processing of the ALV output such as hotspots / custom buttons etc.

When the report is run in background mode, store the results into a database table (such as INDX) which can be retrieved later.

A usual ALV report would have three sections

Here, we will use a simple report which fetches material data from table MARA and displays it

Copy the GUI_STATUS SALV_STANDARD from program SALV_DEMO_HIERSEQ_EVENTS into your report or create any GUI status which has a custom button and assign function code MYFUNCTION to that button.

Call the GUI status in your report by using the appropriate logic.

Note: This step is not mandatory, but it will demonstrate the fact that we can use the values in the original selection screen when we finally display the ALV

Create a button on the selection screen as described below which will allow the user to check and display the output of the background job.

selection-screen function key 1.  “Will have a function code of ‘FC01’

4. Call a new report on click of the button

* Handle user commands on the selection screen
case sscrfields-ucomm.
when ‘FC01’.
submit ztest_stored via selection-screen and return.
when others.
endcase.

We will come back to the contents of report ZTEST_STORED later.

Modifications in the Base Report

We will add two hidden fields to the selection screen.

If the flag P_IMPORT is set, then we will read the data from the INDX table directly, else we will run the pre-existing logic.

A global constant is also declared which is used in generating the memory id for the import.

The format used for generating the key is <gc_id><counter><sy-uname>. This can be modified as per your requirement and convenience.

Here, we can check the system variable SY-BATCH.

If we are in the foreground mode, then this variable will not be set and we can display the ALV as usual.

In background mode, this variable will be set. We then export the current table as well as the selection screen to memory.

For each internal table which we need to export, we can do so incrementing the counter when we populate the memory id field.

Finally, create a new Z report which will get called when the user clicks on the ‘Disp. stored job’ button on the selection screen of the original report.

When data does not exist, the selection screen will look like this

When data does exist, it will look like this

When the user enters the report, in initialization, we can check if data exists for any one internal table which we have exported. Accordingly, we can show the red / green status.

If the status is green, executing this report will submit the original report passing the same selections which the user originally selected.

The user has the option to keep the stored data for later use or to delete it from memory.

Below is the code for the report.

1. Run the original transaction and execute the report in background after entering the parameters 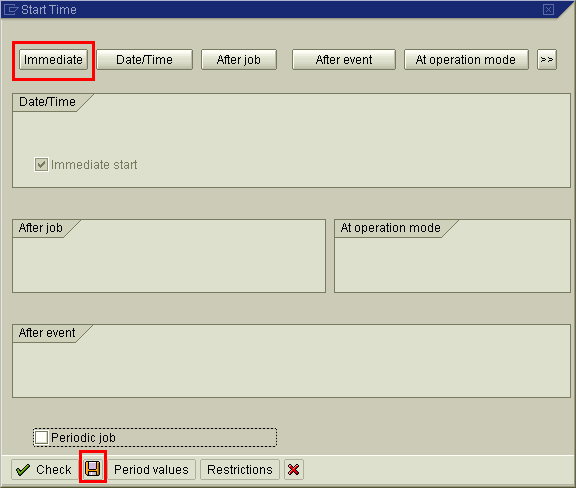 After this, the user can go to another transaction or even log off from SAP if needed and come back to the report selection screen at a later point of time.

2. One the report selection screen, click on the ‘Disp. stored job’ button

3. If the status is green, then click on the execute button

4. This will display the original ALV.

The user can then execute any of the foreground ALV functions such as custom buttons / hotspots. 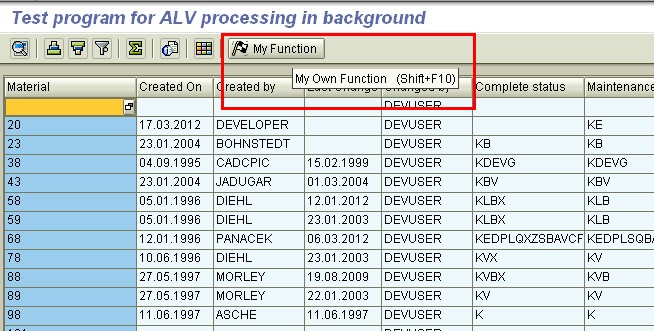