Rather than give notes slide by slide, I am highlighting just a few slides, and including Question & Answer.

The usual disclaimer applies, things are subject to change. 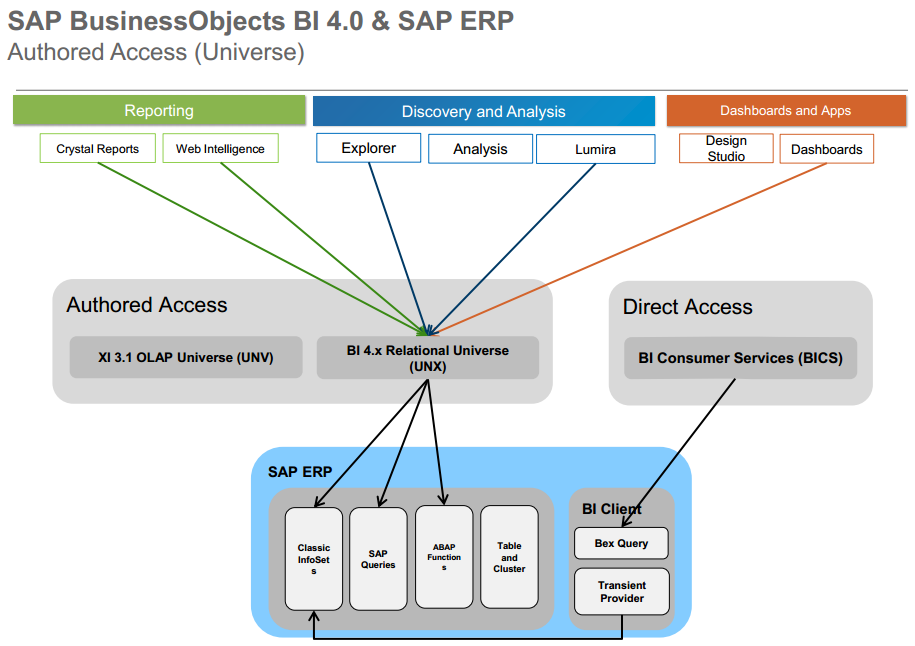 Figure 1 shows the connections with BI universes and SAP ERP.  To clarify, the infoSets shown are ERP, not BW infosets.

Today you can connect BI4 universes to ABAP Queries and functions

On the top, most of the BI4 clients can use the universes except Analysis Office, OLAP and Design Studio. 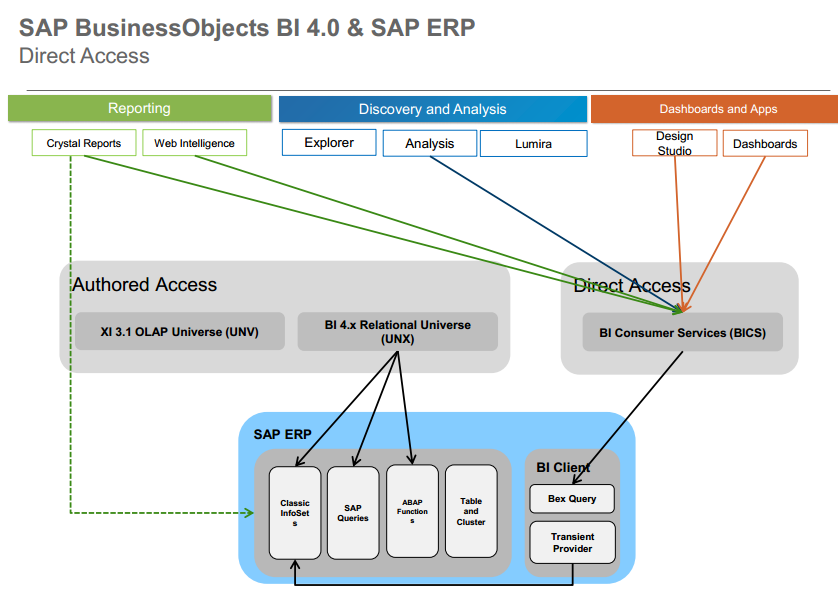 A second option to connect to SAP ERP data is the transient provider.  Your ERP system has a BI client that you can activate.  You can expose classic infoset as a BI provider and connect with a BEx Query.

Figure 2 shows that most of the BI tools can leverage the BEx query except BusinessObjects Explorer and Lumira. 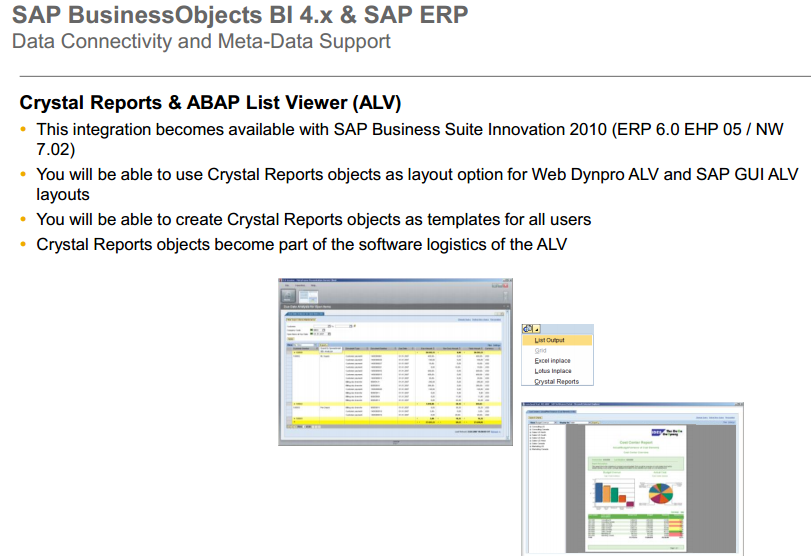 It is a grid control to leverage for the existing ABAP reports inside ERP system, starting with Ehp5 SAP offers SAP integration with Crystal 2011 and ABAP ALV.

Figure 3 shows another option to output in Crystal Reports.  It comes for “free” with Ehp5. 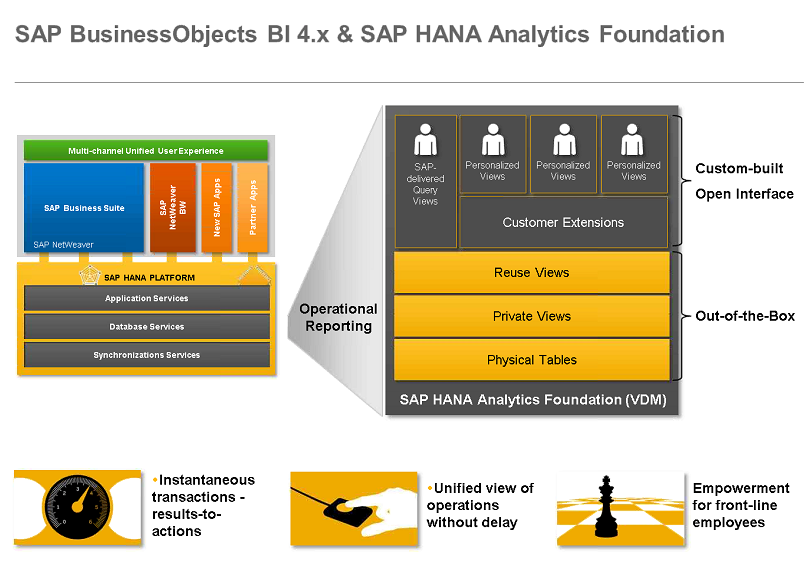 You can integrate BI4 with Solution Manager, CTS environment, and in combination with ABAP transports. 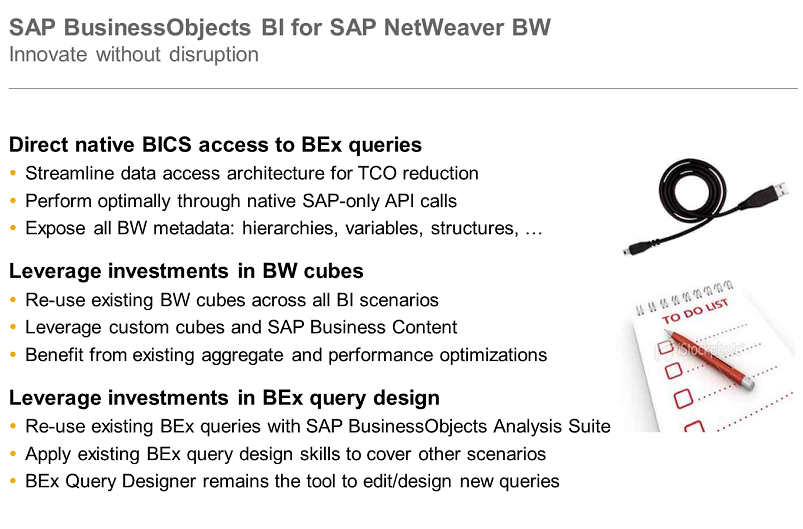 Some customers like the universe as they can rename objects but others prefer to connect directly to BEx Query. 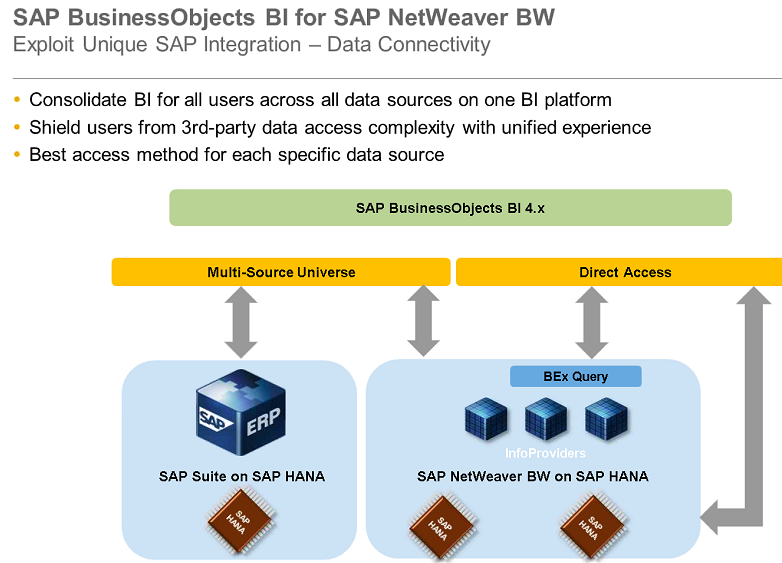 Figure 6 shows the option of a multisource universe – it is relational, and connects to the InfoProvider level in BW and not BEx query.

The universe won’t give you access to restricted or calculated key figure.

On the left is the direct access layer, discussed before to connect to BEx query.

The far right points to HANA.

Lumira does not have direct connectivity to BEx query.  Two products that integrate with BW on HANA are Lumira and BusinessObjects Explorer. If you want to use Lumira with BW data the recommended approach is to use BW on HANA, pointing it to an analytical model.

Often customers treat it mutually exclusive and he says they are not mutually exclusive.  Most reports should use BEx query as you want to see hierarchies.  But you might have scenarios where you want to combine BW with something else – ERP, Hadoop or third party data – then you do need a multi-source universe.  Then you do not need to model the data, load the data as the multi-source concept can work and expose it to BI4 layer. 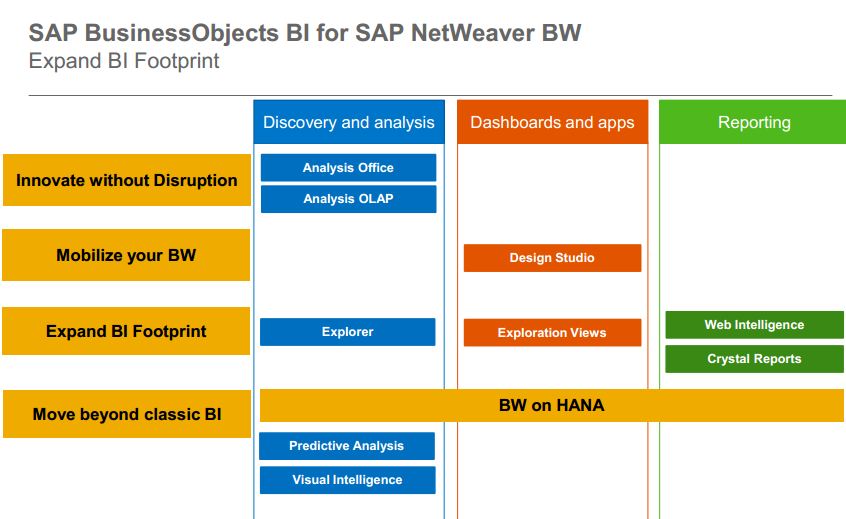 If you are using BW and new to BI4, Ingo suggests starting with Analysis Office and Analysis OLAP.

The next step is to go to Mobile and mobilizing your data.  This is where Design Studio comes in as it gives you HTML5 as a mobile application.

If you want to expand your BI footprint, and go beyond classical BI scenario – you can use Explorer with Exploration views using Exploration workflows, giving the business user an environment to build their own dashboards.

The next to move beyond classical BI is BW on HANA with products like Predictive Analysis and Lumira.

A: It is both a desktop tool and a cloud-based tool; SAP HANA can be used as a data source‑

Q: Can it be compared with like Tibco spotfire?

A: If you are comparing the Data Discovery & Visualization – then yes – similar categories‑

Q: I see Crystal Reports connecting directly to ERP (ECC) on the slide. Is that CR-2013 or CR4E..? What method is used for that direct-connection to ERP data..?

Q: Can we create a Universe in BI4 using DSO from BW? What is the workflow?

A: Yes, you can create a universe against an BW InfoProvider (includes DSO) – you can search SCN for the steps or check the help at help.sap.com ‑

Q: Is there any PERFORMANCE improvement (eg. # of Object/Instance Limits) improved by using CTS method – rather than the LCM/PM tool (which has capacity problems)..?

A: LCM needs to generate package, and package is handed over to CTS‑

Q: Do you have an instruction using BO LCM to migrate/transport BW Crystal report from DEV to QA to Prod.

A: Yes, that is possible – when we talk about CRM is like an ERP box technology-wise. When say we have a universe inside ERP – can be CRM system.‑

Q: What components need to be licenses to use an ABAP function or Infoset in a BI tool?

A: Depends on the tool – if you want to use Crystal 2013/2011 – you would need a license for that, for BI4 – those are different licenses – recommend talking to your account executive‑

Q: So Crystal report saved into SAP BW and transport and publish back to BO environment (as migration process)?  so how LCM can be used in between?  The admin or Crystal report 2011 documentation didn’t mention the use of LCM

Q: One of the advantages of using the BEx queries instead of universe was access to hierarchies..what were the others?

Q: To connect a CRM system to universe – what release is necessary?

A: Universe connects back to 46c – so should work with CRM

Q: Regarding the optimum parameters for Sizing, do we have a recommended parameters / any SDN url where we could keep an eye on parameters you just suggested Bridge memory allocation

A: Yes, will include sizing in links to recording- sap.com/bisizing link with the tool and guidance‑

Q: Will it be addressed in future versions to get the ECC tables in the universe to build webi reports? ( No HANA in our case)

A: No exact timeline; aware customers want to talk to universe via tables…consider using classic infoset instead today‑

Q: how the BW connection get configured to point to QA BW for Webi/Universe and Crystal Report if I use LCM to migrate the contents from DEV to QA

A: take a look at concept of overwrites in LCM which you can configure‑

ALL DAY | HANDS-ON: SAP BusinessObjects BI 4.1 with SAP BW and SAP ERP – Everything You Need in One Day

It will also include working with BI4.1 on BW and  BW on HANA.  You’ll come away with step-by-step instructions on how to use the tools where you work.