I participated in a workshop about Design Thinking during SAP TechEd 2011 in Madrid. It was part of the event “Embracing Inclusion with Design Thinking – Driving Innovation” sponsored by Women in Technology @SAP. My experience in that event was amazing, first because I had a chance to be on the panel discussing Inclusion and Women in Technology, a very rich and interesting discussion, with many participants sharing their opinions and personal stories, but also because of the Design Thinking workshop (presented by SAP Design Consultant and Service Innovation Program Manager: Heike van Geel) and all I could share and learn with my exceptional group (our experience was described by Otto Gold’s blog series). I feel that this event (not only in Madrid but also in Vegas) was a great inspiration for many people who today share experiences here in SCN and practice DT at Innojam, SAP Inside Tracks and in their own work space or private life all around the world.

Before leaving Madrid I had a quick and inspiring chat with Heike. That was a very nice conversation. I came back home very interested on learning more about DT, and how it could be used in my daily life. I don’t build products, I mostly work with Services, and many of the blogs and videos I found about DT were more related to Product Design. How could I use DT to offer better services to my customers? After talking to my husband, he said that by coincidence he has been in a session about this topic during HSM ExpoManagement in Sao Paulo, which took place at the same time as TechEd Madrid. He said that the session “Design Thinking & Innovation” was presented by a Brazilian Design Thinker who teaches at a School of Advertising and Marketing in Brazil. Unfortunately he works and lives in Rio de Janeiro, and I am in Sao Paulo, but then I found out that there would be a training at the same School, but in SP, starting in Feb 2012, and I quickly registered for it. It was after this training that I realized how much my husband, who is also an IT person graduated in Computer Science just like me, but with his heart on Social and Human Sciences, Philosophy, etc., was teaching me DT during our conversations without being aware of it.

The training “Innovation & Design Thinking” was focused on Service Design, which was great for me. But I could feel that most of the students were there to learn more on Product Design and were a little bit frustrated. But for me, the only IT person in that classroom, it was interesting. The funny thing, and another coincidence, was that one of the 2 teachers has worked as an SAP project manager some time ago, is married to an SAP consultant and have been visiting the D.School, Hasso Plattner Institute of Design at Stanford. We exchanged some information about Hasso Plattner Institute (HPI) and he said that he was surprised when I mentioned it because many SAP consultants have never heard about it. (That was in the beginning of 2012). So, if you are still not aware of it, and want to know more, please visit the HPI website. Here you have the link with the founder information: http://www.hpi.uni-potsdam.de/personen/founder.html?L=1

Many coincidences have been happening to me regarding Design Thinking. It started with the opportunity given by Marilyn Pratt. She invited me to the TechEd event after talking to one of the Brazilian mentors, who I met during SAP Forum Brazil 2011 in the SCN session and is very close to Marilyn. Then comes the fact that my husband was in a DT event almost at the same time as me, in another part of the world. I have exchanged some e-mails with Heike since the event, and every time I received a message from her I was writing to her at the same time or studying DT or watching a TED video about it. I mentioned that to her once and she said: “coincidence or chance. “Chance favours the connected mind(s)” – Steven Johnson”. Steve Johnson is the author of “Where Good Ideas Come From: The Natural History of Innovation”

Now talking a little bit about DT, here I point some of the things I learned during my training and readings.

Design Thinking is not a methodology, it’s a way of doing things focused on people in order to change the world. It’s a multidisciplinary approach to innovation, problem-solving oriented and supported by the HCR, Human Centric Research. It’s a group of concepts and skills of a process driven innovation strategies. It integrates new processes of creativity and innovation. Design does not only mean “doing things beautifully” but doing things that work wonderfully better. “Do the right things” and not “Do the things right” as says Daniel Rosenberg, SAP SVP for User Experience, in sap.info article Design as Intuitive as the iPhone

Design Thinking has focus on the users, on the usability and not only on the functionalities.

With Design Thinking you organize your creative thoughts with empathy, communication, optimism, experimentation and collaboration. You put the persons and all their needs in the centre when analysing a problem and looking for a solution. You have a challenge, and this challenge is based on 3 things: people, technology and business. You need to be careful and look for results that can be meaningful for the people, technically feasible and economically viable.

The concept of innovation was widely discussed. What is innovation? Innovation according to them is something that causes impact and transforms people’s lives. Innovation can be Breakthrough (Radical) or Incremental. Incremental Innovation means doing more of the same things you have been doing with somewhat better results, while Breakthrough or Radical innovation changes the fundamentals of the business, creating a new industry and new avenues for extensive wealth creation. For instance, as I understood, Invention is an example of Breakthrough Innovation. I read an article on website Intense Minimalism, from Davide Casali, also known as Folletto Malefico, an hybrid interaction designer from Italy, as he calls himself, that explains these types of innovation with metaphors: “incremental innovation is like being on a mountain and trying to reach the top of it. Radical innovation instead is like jumping to a new mountain with the hope that it’s higher than the one you are on.” (http://intenseminimalism.com/2012/incremental-and-radical-innovation-can-user-centered-design-help/).

If it’s Radical or Incremental is not important during the design thinking processes, while you are creating a product or a service. You will find out if it was innovation and which kind after it’s done, listening to the users, checking the impacts it caused on the market and on the people who use it.

There are three big phases of Design Thinking processes:

2. Ideation: Use all the info you’ve got during scoping and involve people on the creation of relevant solutions, having lots of ideas

“The way to get good ideas is to get lots of ideas and throw the bad ones away.”
Linus Pauling, Nobel Prize winning chemist

When I was studying this phase, I realized how much we already use Design Thinking in SCN. SCN is a collaborative network, where we can co-create, discuss, share. And we also have an Idea Place. It seems so obvious after we see it. We are already doing some Design Thinking and we didn’t know it.

3. Prototyping and Realization: Visualize, improve and communicate the ideas to the group and at the end, to all.

“What I hear I forget. What I see, I remember. What I do, I understand!” – Lao Tse – Chinese philosopher

If your solution will be innovative or not, you won’t know before people use it. It will depend on the market, on the impact on people’s lives, on how much they were transformed and loved the solution.

During the training we worked in groups, tested some of the different tools that can be used in each phase, such as storytelling, in-depth interviews, brainstorming and prototyping. We used lots of post-its and pictures. The prototyping phase was particularly nice and funny, with lots of LEGOs 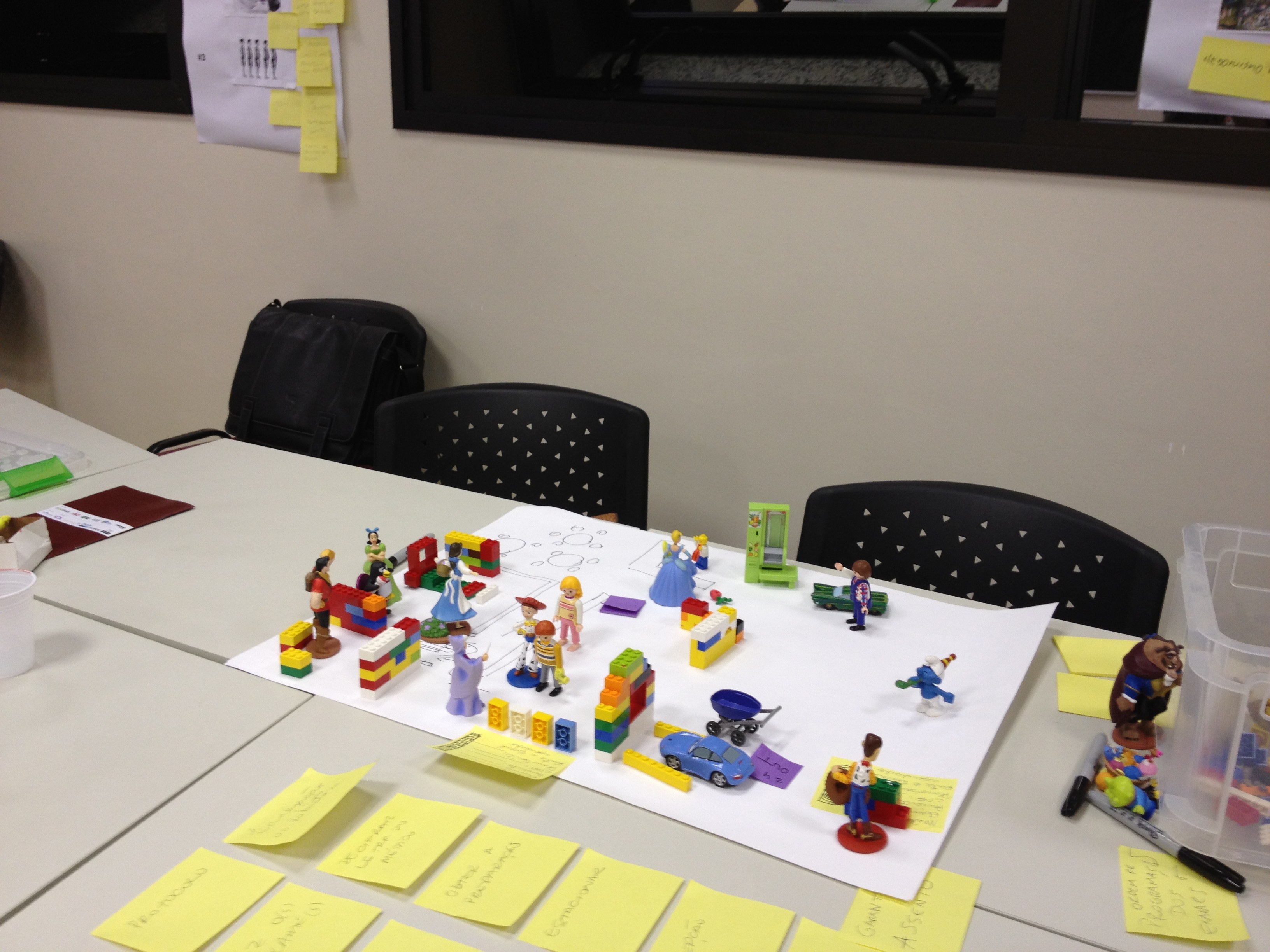 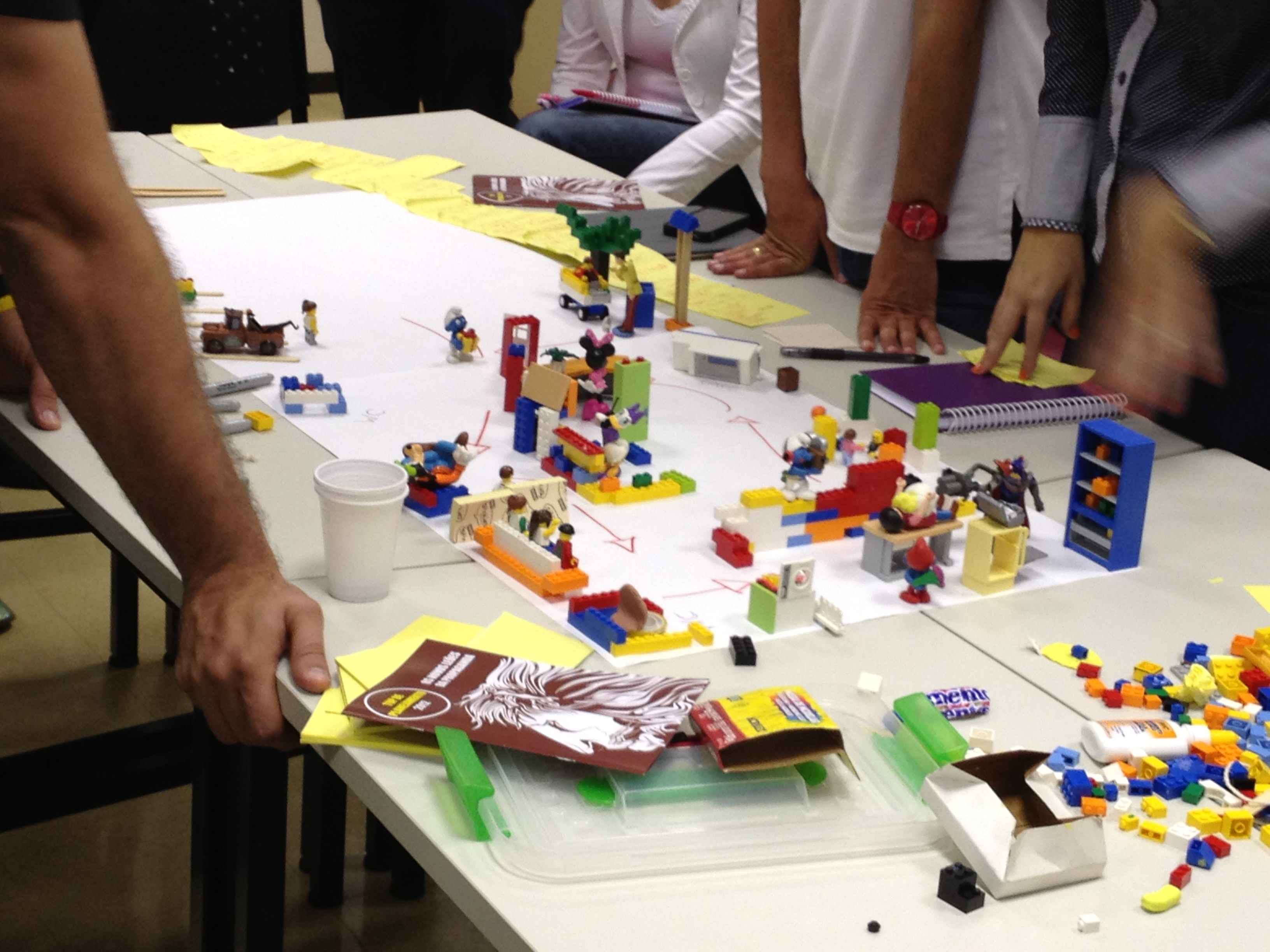 At the end of the training my group presented our project acting as the “personas”, and not just talking and showing power points. We played our users role using the service that we created (our goal was to create a new service to solve a traffic jam problem during big events such as concerts). That was a very interesting way to present our solution. 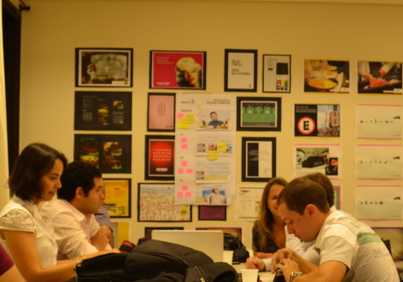 Our group preparing the presentation of our project 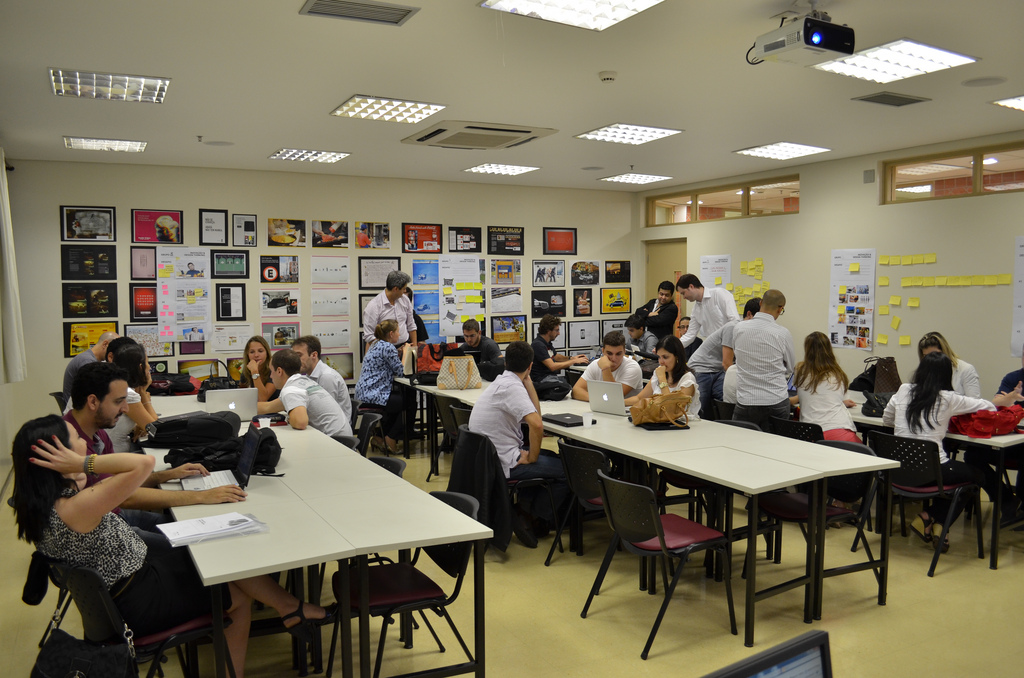 All groups in action

I tried to summarize the concepts of Design Thinking that I could learn during my training. I am still studying it and have a lot to learn and practice.

In 2012 I had again the opportunity to learn during TechEds. In Vegas we had an evening event called Role of Empathy in Design Thinking where I could meet Hester Hilbrecht and Slim for the first time. In this event I was invited to be one of the three volunteers to speak, and one of the goals was to describe a moment in life when we felt Empathy was missing. Thanks again to Marilyn. I am very shy but she always makes me feel comfortable and it’s impossible not to accept her invitations. After the speakers finished, all the participants, divided in small groups, had to share their own stories. It was a different experience for many people as we had to open ourselves to people we were just meeting for the first time. A very special moment. And Slim’s presentation was fantastic, people were not even blinking while he was speaking. I missed Heike, she could not be there for the evening event, but she was present during Innojam.

In Madrid we could not have the same event with Slim because of the Strike that happened during TechEd. But the topic was live even though we didn’t have the evening event with Slim thanks to Marilyn and Hester. They spoke in an Expert Networking Session about Empathy in DT and many people joined them. Marilyn also made an informal evening event happen: a Design Thinking dinner where we could discuss the Role of Empathy in DT and know each other a little bit more. We also had the opportunity to meet Julia Dorbic from D-Labs in Postdam. Tom described very well his thoughts and feelings about the evening event and about TechEd Madrid 2012 here: http://scn.sap.com/community/design-thinking/blog/2012/11/22/empathy-serendipity-likeneverbefore#comment-338816. As Tom said in his blog: “When Marilyn Pratt hosts a session, you don’t want to miss out.”

Heike and Slim were missed, I wish they could be there.

TechEd Bangalore 2012 also had an event about Empathy, described by Kumud in her fantastic blog: http://scn.sap.com/community/design-thinking/blog/2012/12/02/design-thinking-with-empathy-teched-bangalore-2012.

Since then I have been in touch sometimes with Slim, which is a pleasure, and have been trying to follow the DT place in SCN and other sources to keep myself updated. I planted the seed in someone’s mind and now a friend of mine is sharing the passion. She found out that a free course called “Human-Centered Design for Social Innovation” offered by Acumen with partnership of IDEO.org (http://plusacumen.org/courses/hcd-for-social-innovation/) was going to happen in July and immediately invited me. “It is a five-week course that will introduce you to the concepts of human-centered design and help you use the design process to create innovative, effective, and sustainable solutions for social change”. We will participate in a group of 4. Let’s see what we can develop during this course.