Datasets often include many columns and it is a challenge to focus on the ones that are most relevant for a certain analysis. Hence the elimination of irrelevant columns helps simplifying the task and helps producing better results. Such elemination of columns, that can also be called variables or attributes, is often called feature selection.

The Chi Squared Test of Independence is a common approach to eliminate individual variables. It tests whether there is a significant association between two categorical variables or whether the distribution of data appears to be as expected (proportional). If there is no association, then this indicates that a column can probably be eliminated.

To give an example, imagine we want to find predictors for people’s voting habits. The Chi Squared Test of Independence can now indicate whether the gender for instance (first factor variable) has an impact on the party voted for (second factor variable). If the variables are independent, then the male and female voters have the same voting pattern and we can eliminate the gender as predictor variable. If the variables are not independent, then men and women appear to vote differently and we want to investigate the gender impact further.

During the calculation of the p-value a so called contingency table is created by the algorithm. This table counts the occurance of each combination of the two variables’ values. So sticking to the above example, it shows how many votes each party got from male voters and from female voters. The Chi Square Test of Independence should only be used if there are at least 5 occurances of each combination. Each party must have received at least 5 votes from men and 5 votes from women. This component returns the miniumum value of a cell in this table as column called ‘Min Occurance Count’. If after the execution of the model you see a value below 5 in this column, you should discard the outcome of the test. You can consider grouping some of the less common combinations into a ‘Others’ value which will increase the occurance count within the contingency table.

The Custom R Component described below is an implementation of the Chi Square Test of Independence for SAP Predictive Analysis.

Here is an example of working with this component. We take a common business challenge and want to analyse the results of a Marketing campaign. Our aim is to understand what customer characteristics might or might not have had an impact on purchasing a certain product. Our dataset holds information about 1000 people that were contacted during a marketing campaign. We can see some demographic characteristics of those contacts such as age and martial status. The OUTCOME column states whether the person purchased the product we had promoted. 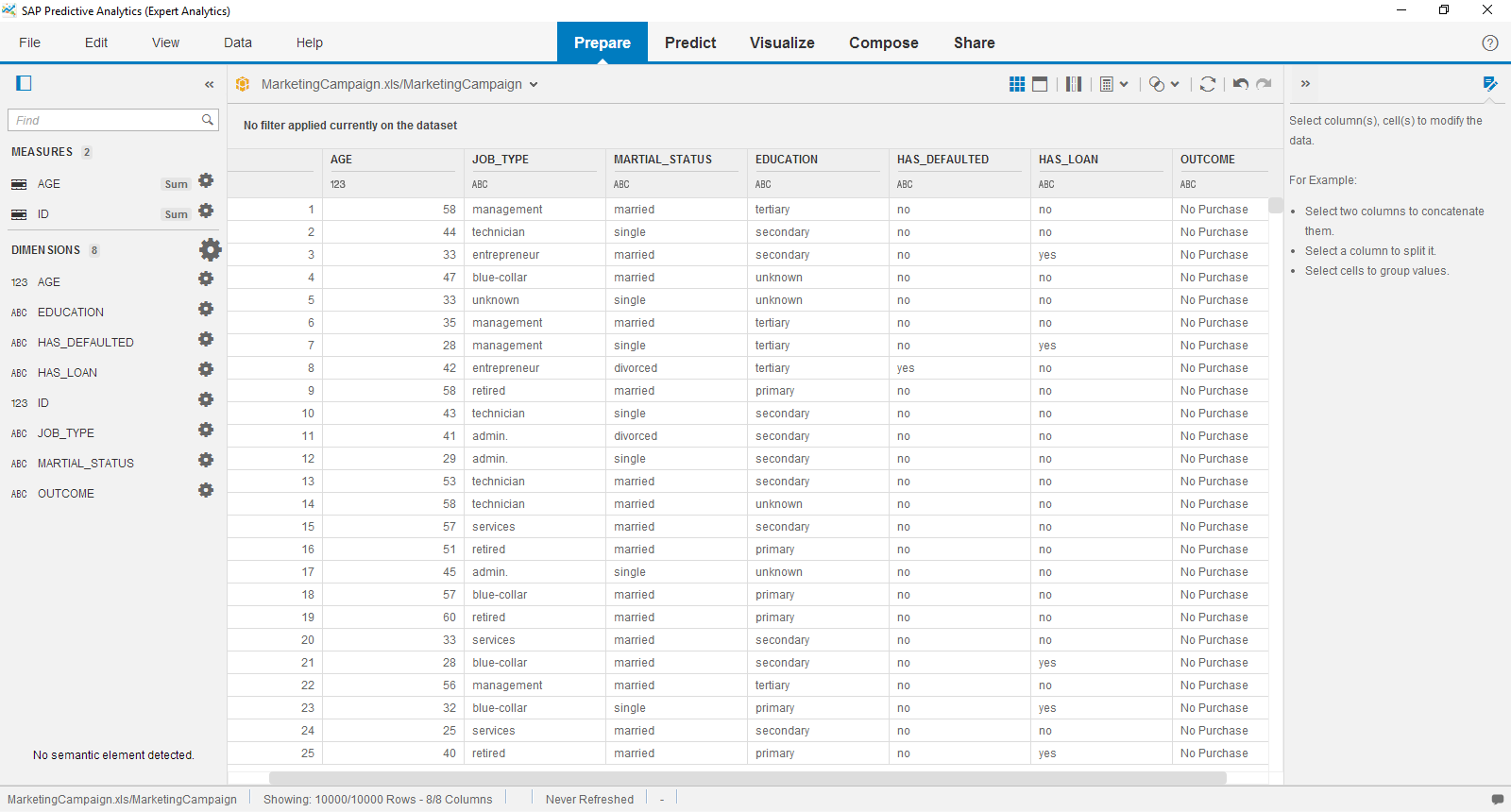 We want to find out now whether there is a dependency between the martial status and whether the person purchased the product. 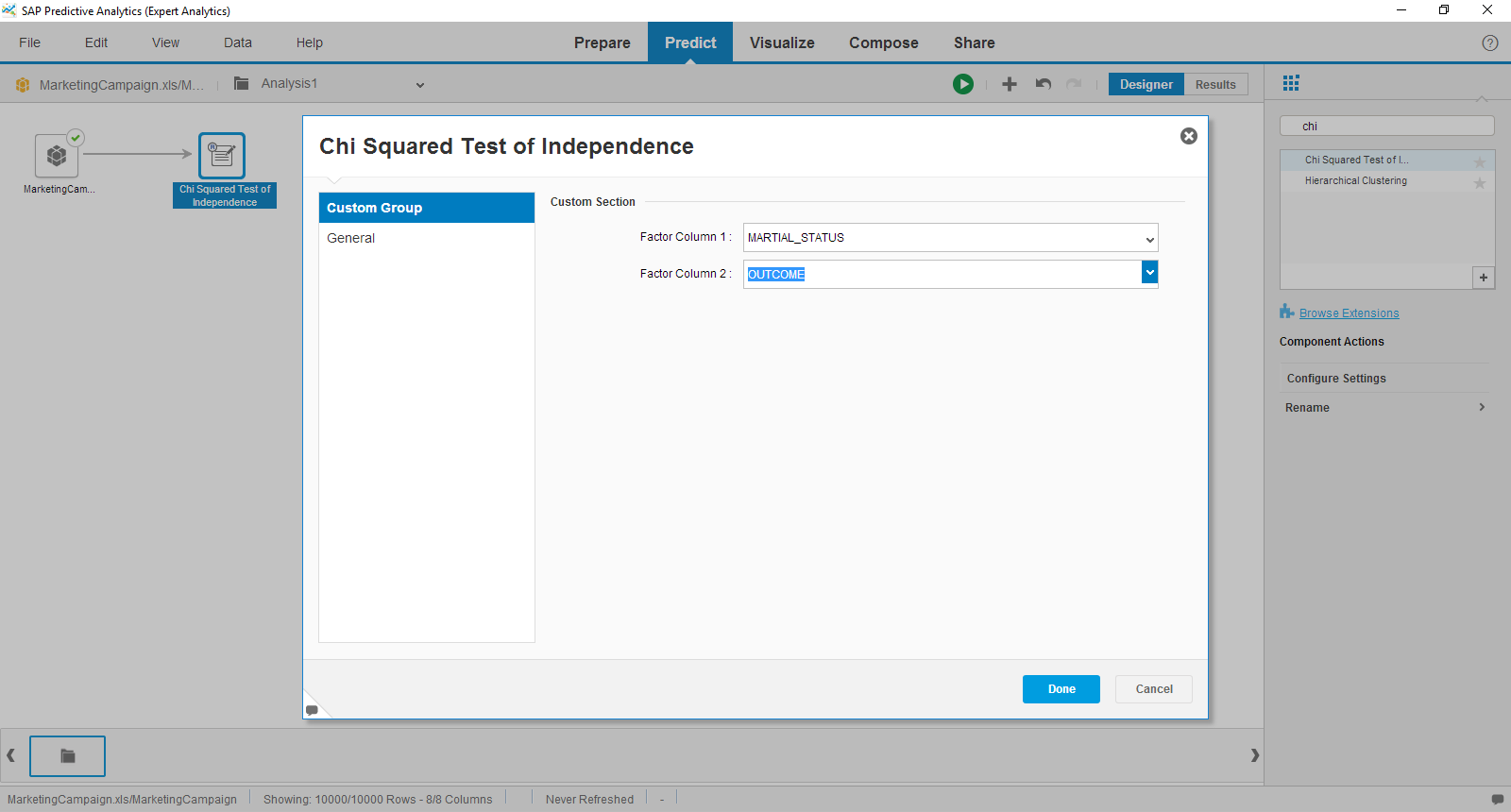 Running the analysis shows a p-value in exponential notation well below the 0,05 threshhold. The miminum value in the contingency table is 65, so above the 5 that is needed. Therefore we can conclude that the null-hypothesis of independence has to be rejected. The success of the Marketing campaign was different depending on the contact’s martial status. Therefore we decide to keep the martial status in our dataset. 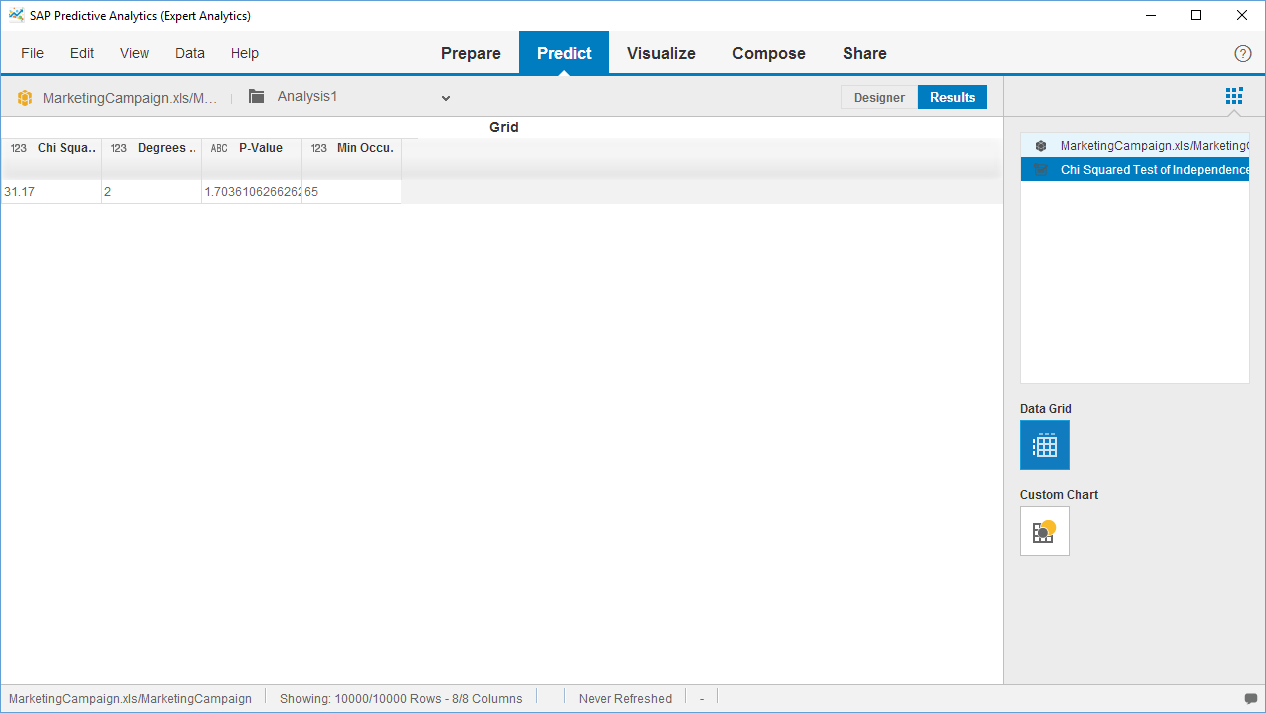 You can click on the ‘Charts’ tab to see a mosaic plot of the contingency table. 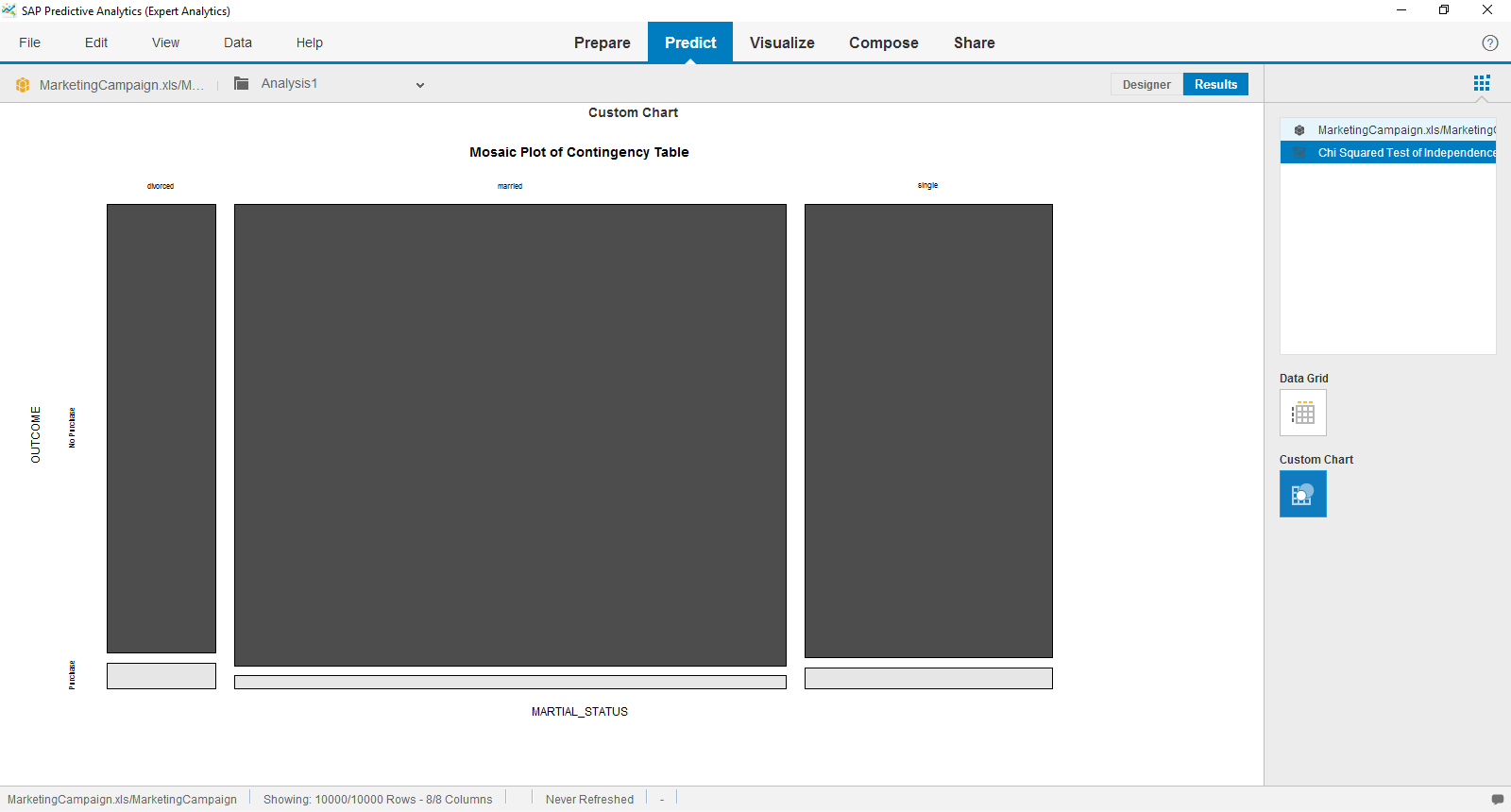 If the miminum value in the contingency table is below 5 you can consider grouping some entities in a common bucket.

The component can be downloaded as .spar file from GitHub. Then deploy it as described here. You just need to import it through the option “Import/Model Component”, which you will find by clicking on the plus-sign at the bottom of the list of the available algorithms.

Please note that this component is not an official release by SAP and that it is provided as-is without any guarantee or support. Please test the component to ensure it works for your purposes.

Your code is running perfectly, but the result outcome with my data set is not so good.

I require some help with that.

My data set contains around 13 columns and almost about 300 records. The model is generating a good enough p-Value, but the degree of freedom is not logical at all. Its not making sense. On top of that, the Minimum count value is always "0"

Could I have some insight on this issue ??

I know my question may not be very clear, but from the top of your head, what do you think could be the major problems with my data set, because of which I'm getting such results.

can you please email some sample data and a screenshot of the output to andreas.forster@sap.com

I will try to have a look

Thanks for your prompt response. I'll send you the data sample and screenshot that you have asked for. In the mean time, I need some help regarding a different topic, but related to creating custom R-components. I was trying to develop an R-script for the Naive-Bayes classifier so as to add it as a custom R-component in SAP PA. But I have not been able to come up with anything solid.

Can you provide me with some literature on this subject? Or can you help me directly with it? Since you developed the R-script for the Chi-Square test, I believe you might have some deep insight on building this Naive-Bayes algorithm as well.

Yes I got a bit of R code on Naive Bayes. I will generalise it for a SAP PA component. Just stay tuned, hope it won't be long.

I just went through the article under the link you provided.

Thanks and Great Work.
Didn't run it though, but just thought of congratulating you on your efforts in this field.
I'll run it and let you know if I face any issues.
Thanks again.