Often there are requirements like having a common large tasklist for a category of equipments and choosing the operations selectively into the Maintenance Order depending upon the equipment specifications on which the order is being made.

Let me explain with an example:.

Suppose there are 100 motors falling into 6 categories as under:

Now the operations to carry-out the work on these machines vary with different ratings (specifications), often due to the variance in the amount of work involved.

We can have all operations of such 6 categories of 100 equipments in a single large tasklist, yet use in maintenance orders created on these equipments.

i.e., While creating the maintenance order, system would choose only those operations from the tasklist which are relevant to the equipment on which the order is being made .

Such tasklist  is called a ‘Configurable Tasklist’.

Let’s assume the common large tasklist (General Maintenance tasklist) we have for all these motors is  the one shown here, which is to be configured.

Now let us see how, the tasklist is configured.

Create a capacity characteristic for ‘MOTOR_CAP’. 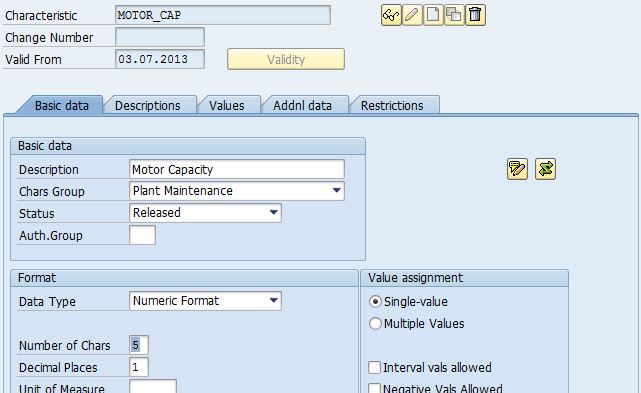 Now, specify the values and save. 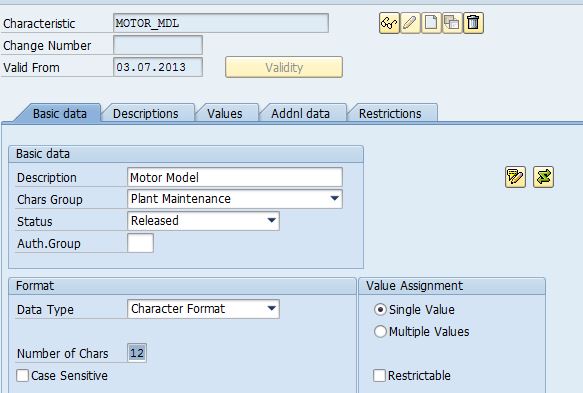 Specify the values and save.

Assign characteristics created  above and save. 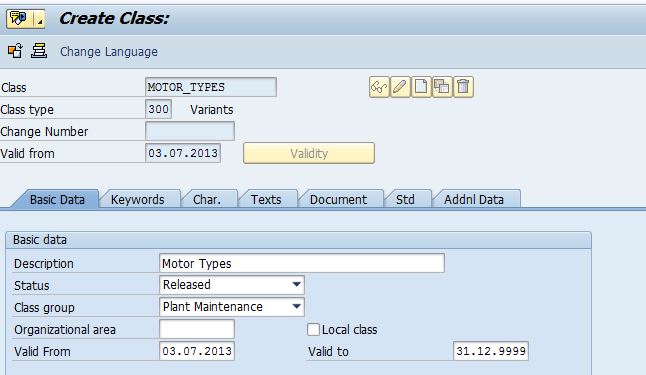 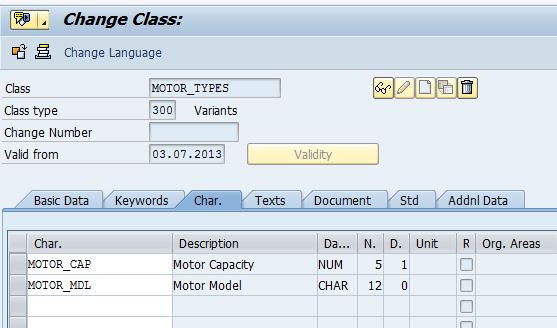 Create object dependencies as below: Go to  ‘Dependency Editor’  and  specify the dependency  as shown here.

Similar dependencies to be made for all combinations of Capacity and Type, viz.,

Here another illustration is given for dependency ‘SQI7.5’. 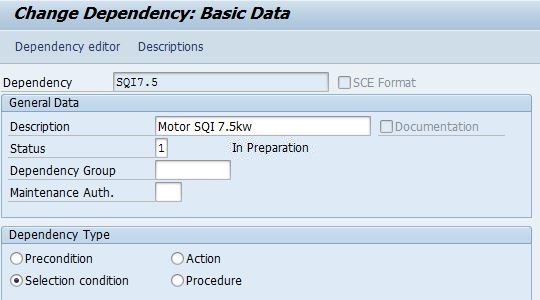 Create as shown below.

When you click on Class assignment icon (2) above, you will be in the screen below.

Here, do not give values in the Characteristic value fields and Do not forget to select the ‘Std Class‘ check-box. 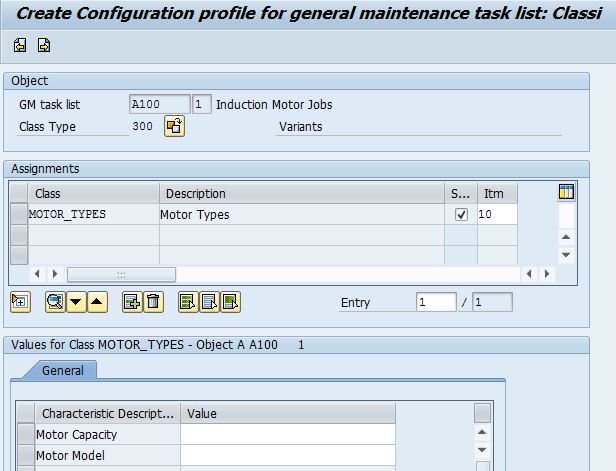 Assign class ‘MOTOR_TYPES’ to the these 100 equipments, with respective characteristic values as shown below: 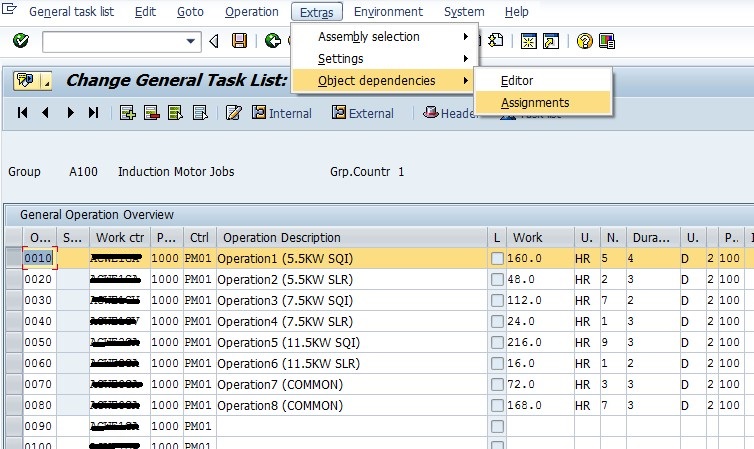 Assign dependencies to all the tasklist operations which are equipment specific, in a similar way.

Now, the configuration is complete.

Let’s see what effect this exrecise has while selecting tasklist in an order  (IW31/32).

In the popup,  give the Tasklist group and counter, as shown.

In the resulting screen,  give the characteristic values of the order equipment, 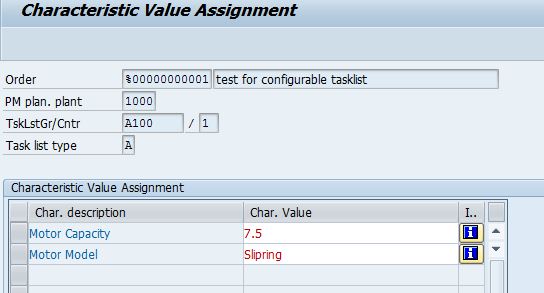 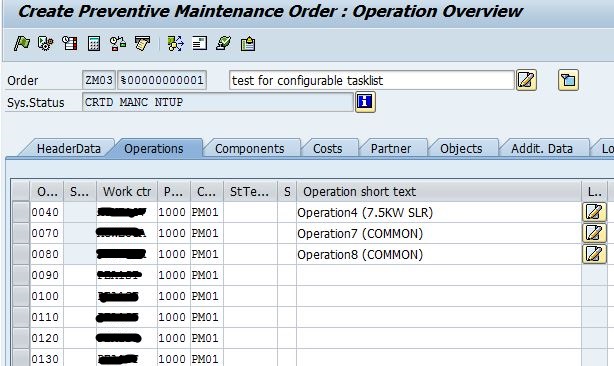 System has chosen the relevant dependency operation (0040) and two operations, where no dependencies were specified. (0070, 0080).

This work can be extended to a tasklist of 100’s of operations covering 1000s of equipments.

In my experience, very common application has been in Repair shops where equipments like Motors are repaired. Here very few numbers of Configurable tasklists are maintained covering 1000s of motors.

Thanks for sharing the information .Its really good

Thanks for sharing such nice information.

Very useful, thanks for sharing

Nice article but just wondering why user needs to mention the values for charateristics at the time of Task List selection.The system should be smart enough to read these characterisitcs values from equipment master and choose the relevant operations by itself.

Thank you for the comments,

That's exactly I was researching for, But this was not possible. Ther must be some way. If this happens this would be more useful.

I just found the solution to this problem.You need to use configurable material in equipment master so the characteristics values will be copied by default.Please let me know if you need step by step solution.

Yes, Now I recall, I used to do something with Configurable material also,

This will be in the interest of everyone including you.

Hope Thyagarajan agrees with me.

Thanks for sharing. Very valuable document.

WOW! What a great function - I was even not aware about this feature of the task list.

Thanks a lot for this illustrative and well explained business case scenario!

Jogeswara, I have one question:

I'm just wondering if you are using the EQ (which you classified upfront) as reference object in the PM order & then you insert the task list - why do have to enter the characteristic values manually? Isn't it possible that they are automaticall taken from the reference object and so the relevant operations are chose also automatically?

And this leads me to the next question:

Is it possible to use this also in preventive PM orders, which are created by IP30 deadline monitoring (run by an auto-job). Because for this function you'd also need an automatic assigned of relevant operations over the classification of the reference object (EQ in maintenance item)?

I hope I'm not the only one who came up with this question/idea.

Your are right about your question about automatic characteristic values.

Please see the link above.

About the second question, it looks logical, but my senses say things are not that easy in SAP. We need to explore.

Have Great week ahead.

This doc is simple the best. Have you also written on Configurable BOM as well?

I haven't, but a member Tehsin Ullah Khan chosen to continue this document and wrote Configurable Task List continued...

Hope you'd find it interesting too,

Kind regards and thanks in advance for your help.

I never imagined a situation where Configurable Tasklist will be required for other than General Maintenance Tasklist ( i.e.,for a Technical Object), for obvious reasons. Hence the answer.

Hi Rao, I'm not clear with your answer. anyways the scenario is that I would like to maintain several equipments which are in the same functional location, but based on the number of equipment (characteristic 300 in the FL), multiply the duration of each operation in the task list, in order to find out the total duration of every activities depending on the number of the equipments in that particular FL. In this way I do not need to create one task list for each functional location.

We need to try this to draw conclusions.