So, I was just trying to see if there is anything I can get from analyzing myself the waterfall model. Let me make it with excel, and you can see the figures below. 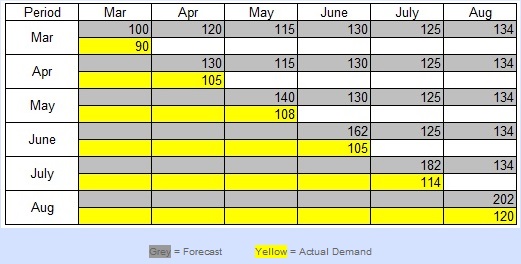 The point I finally concluded: With this observation in context of waterfall analysis, I came to know that we had the forecast constantly increasing while the demand was not up to the expectation all the time as we finish off with a period. And this obviously results in inventory cost for you as we are constantly increasing our stock!

Ok then, hope you observed the pattern [Apr: 120 –> 130, May: 115 –> 140, June: 130 –> 162, July: 125 –> 182, Aug: 134 –> 202]; if we take the snapshots of the forecast in each month from Mar to Aug, there is a constant increase in the demand at each month we enter in, and this we see considering only one parameter: the actual sales. In trying to level our forecast which was previously made based on the actual demand received, we are adjusting the forecast accordingly in the future buckets. Does that mean I have to ignore my forecast whichever is not met in a particular period so that I don’t end up increasing my forecast in the future?

Hmm, not like that; but this is much to do with the S&Op team to decide by taking these snapshots and looking at how the forecast needs to be adjusted in the coming months. Maybe the forecast in some months of the future should be reduced as well, as you try to adjust the demand for the very immediate bucket! Err, but this will again create a problem at the sourcing locations as they will not have the clear visibility on how the forecast changes in the future, and this will lead to inefficient planning, consequently resulting in a situation where plants will at some point say: ‘Boss, you cannot give to me this forecast now!!’

Whatever it is: at least for me, it is now concluded that you can never go to rest by doing the forecast once and then sitting silent. You need to have a close look on several parameters that would affect the forecast: we here have only considered one such parameter: actual sales. So guys, THIS adjustment of forecast is, unfortunately a never ending story.

And hence, it is concluded that if I take up the profession tomorrow as Demand planner from my current role of APO consultant where I am helping the Demand planners to make their operations go smooth; I think I am going to end up again restless.

Thank myself that I realized this now itself!