Why Do Sandwiches Taste Better When Someone Else Makes Them?

Ever notice that food tastes better when someone else makes it for you?

“When  you make your own sandwich, you anticipate its taste as you’re working  on it. And when you think of a particular food for a while, you become  less hungry for it later. It’s a kind of specific satiation, just as  most people find room for dessert when they couldn’t have another bite  of their steak. The sandwich that another person prepares is not  “preconsumed” in the same way.”

At first blush, this explanation seems counter-intuitive. Studies have shown that picturing yourself eating a food you enjoy (perhaps  chocolate) induces an increase in saliva and the desire to eat it.   Similarly, imagining the smell of a cigarette increases cravings in smokers.  So why doesn’t making a sandwich improve the taste? 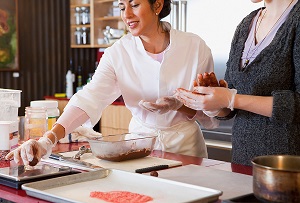 ecreases the physiological and behavioral  responses (wanting to eat it). In other words, seeing the sandwich get  made over time makes it feel less novel and thus less desirable.  A  similar phenomena works with repeated exposure to the same food: a fifth  bite of chocolate is less desirable than the first.

This  is an extraordinary compelling idea. We will likely eat less if we make  our own food and imagine eating it several times beforehand. Maybe we  could call it the Daydream Diet.

This blog was originally posted on Manage By Walking Around on July 1, 2013.

It's true, I've also noticed that I'll watch a movie that I own (and enjoy it more) when it's on TV rather than putting the disc in (even with the commercials, it's crazy!)- there's something to the spontanuity and unexpected nature of it.  This also holds true when a good song comes on the radio rather than playing it through your iTunes or a CD that you own.

I second you on the song on the radio vs iTunes example. I guess that's what was in their minds when they introduced the 'shuffle' feature.