No doubt about it, Americans love their hot dogs. 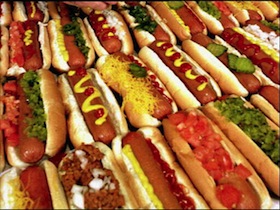 According to the National Sausage and Hot Dog Council (NHDSC) Americans are expected to eat 150 million hot dogs over the July 4th holiday alone, part of the 7 billion hot dogs eaten over the summer season from Memorial Day to Labor Day.

How did the modern day hot dog become such an iconic part of Americana? It’s a tough question to answer and even the NHDSC offers little clarity:

It is likely that the North American hot dog comes from a widespread common European sausage brought here by butchers of several nationalities. Also in doubt is who first served the dachshund sausage with a roll. One report says a German immigrant sold them, along with milk rolls and sauerkraut, from a push cart in New York City’s Bowery during the 1860’s. In 1871, Charles Feltman, a German butcher opened up the first Coney Island hot dog stand selling 3,684 dachshund sausages in a milk roll during his first year in business.

Current activities of top selling hot dog brands offers a bit more to chew on when it comes to the celebration of the hot dog:

Ball Park franks might “plump when you cook ‘em” but they also like to play up patriotism in a big way, according to their Facebook page. Take this shareable message as an example: “The only thing that could make our BBQ even more patriotic? You. In a powdered wig.” Ball Park is part of Hillshire Brands (formerly Sara Lee). Learn how they run better here.

Already a name synonymous with hot dogs, Oscar Meyer has one-upped itself this year with a creation made in meat-lover’s heaven: bacon flavored hot dogs. Oscar Meyer is a Kraft Foods brand. Learn how they run better here.

Costco, the 74th largest company, and the largest membership warehouse chain, has the best hot dog deal in town that has remained true for 27 years: $1.50 – and that includes a soda. Last year, the retail giant sold 109 million combos in its 600-plus warehouses worldwide.

To those observing, Happy Fourth of July! Please chime in with your favorite/best hot dog moments below.

Nathan's Hot Dog contest never ceases to entertain me each year (much like the National Spelling Bee). I love it all - the "skill", the WWF-like competitors, the fact that Joey Chestnut actually eats healthy most of the time. Love it, love it.

You might enjoy this clip of Chestnut eating a 5+ lb burrito on Man vs. Food: