SAP Focuses on Technology to Win Big in Racing, Insurance and Other Industries

SAP is trying to muscle into a new market. Insurance may not seem tough — it sounds nerdier than watching the Sharks square off against the Jets — but SAP will face plenty of opposition from entrenched industry veterans.

Insurance offers growth opportunities for SAP, but a finance analyst from Boston-based Aberdeen Group wondered how SAP will distinguish itself from other players on that stage. So she posed the question to three experts at the 4th annual SAP Industry Analyst Base Camp.

“Technology is the Differentiator”

“Innovation is really critical,” SAP’s Debbie Schmidt told the influencer conference. “Many of our competitors might focus specifically on applications, but not the underlying technology.”

Scale is a huge advantage for SAP, noted Schmidt, the company’s COO and head of the Transformation Office in Global Financial Services. Another advantage is its ability to quickly integrate its high-tech solutions, either alone or in tandem with customers.

Other candidates for SAP’s “it” factor include:

That’s according to Martin Mrugal, senior vice president of Global Business Development and Innovation with SAP.

“The confluence of that portfolio … is creating new solutions at a rate that I have not seen in 15 years,” Mrugal said. “And that is a huge competitive advantage.”

“They’re running all their race day telemetry, analytics and everything that they do on SAP HANA,” SAP’s Steve Peck told the assembled influencers. “They take 200 telemetry points off the cars eight times a second, and grab mega amounts of data, and crunch it in real time.”

Banks use the same technology to detect fraud by quickly analyzing immense volumes of data in a way that no other technology can, according to Peck, senior vice president for SAP Global Strategic Initiatives. Financial services firms need this information instantly — or as close as possible to instantly — and so does McLaren.

“This is a racing crew that tries to gain two seconds a year,” Peck said. “It’s the difference between winning and losing in the F1 circuit.”

So SAP is poised to be a powerful contender in the insurance arena, thanks to its computing power, speed and deep bench of partners, according to the panel.

“And that’s really just the tip of the iceberg,” Mrugal said.

“VIDEO: The Key to SAP’s Future Success? Listen Up”

“SAP Focuses on Customers and Innovation to Meet Its Goals” 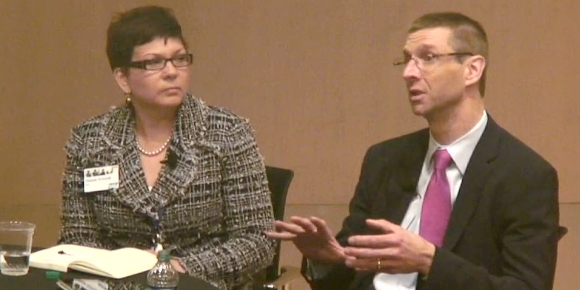 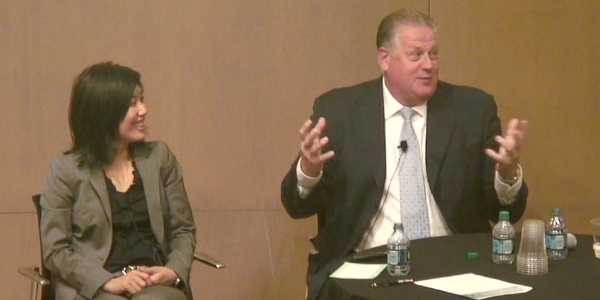