What is in BI4.1 Promotion Management – ASUG Webcast recap

SAP’s Kai Chan provided this webcast to ASUG during the past week.  Starting in BI4.1 release life cycle management is renamed to promotion management.

The usual product disclaimer applies that things are subject to change. 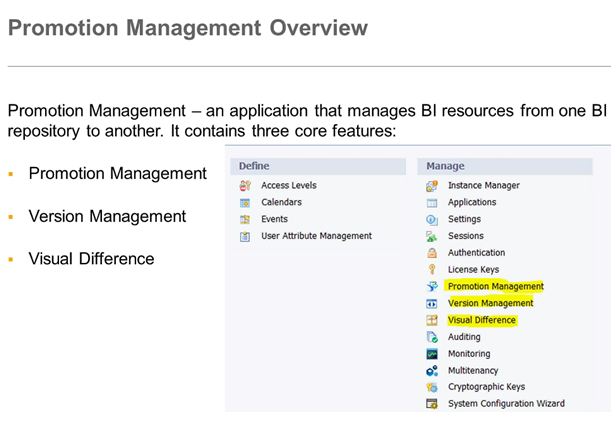 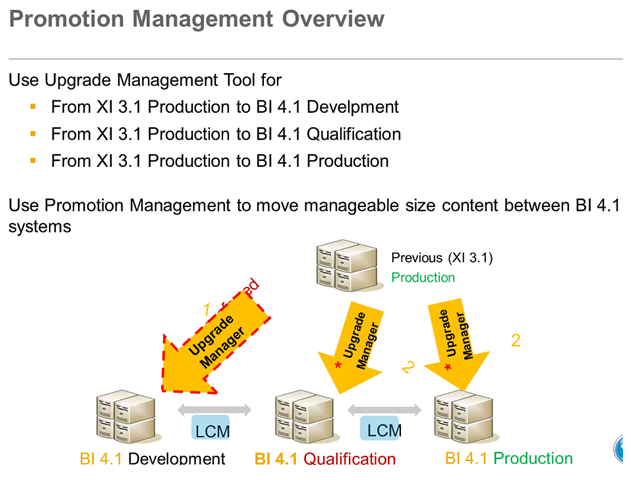 Kai said there are different behaviors between the tools – promotion management and upgrade manager.

Promotion management is only for similar versions with a manageable size and not to move entire system from one to another.  You move “small chunks” between the systems.

Figure 3 lists the support for new document types.  Support  means when you are doing promotion, you make sure dependencies are calculated, overrides are handled, and icons for the different document types are available on the promotion management page. 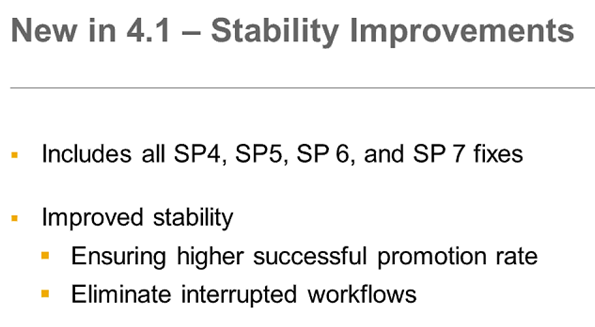 Figure 4 reviews the stability improvements in BI4.1, with fixes included.

Kai said they added more automations to ensure the workflows and workflows should more seamless and more stable.

Kai said they complaints that promotion management only worked for administrators.

Therefore they need delegated administrators to have access and this is highlighted in KBA listed in Figure 5.

They do not want passwords to be seen

He said SP1 closes gaps so not seen as an issue 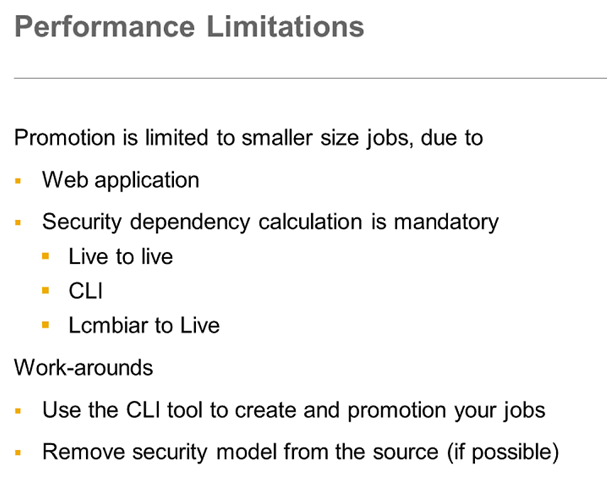 Figure 7 shows some of the performance limitations.  Kai said jobs should not be over 100 due to way promotion management is working.

Promotion management is a web application on TomCat

Security dependency calculation in scenarios where you  create a job, adding content to that job – live to live scenario – create the job – not just jobs selected, but also security dependencies 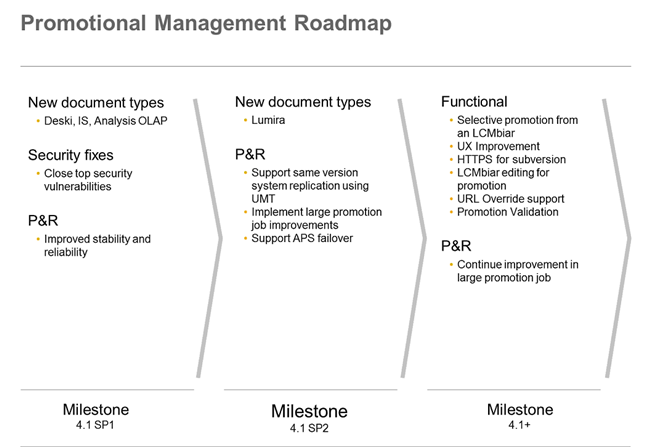 Figure 8 shows the roadmap. In the middle  SAP  will look at adding Lumira as a document type.

Version management supports HTTP and they are looking at supporting HTTPS

For large promotion jobs , they want to make sure customers are not blocked

He demonstrated the command line interface, such as moving a folder to promote from dev to qual.  He said the steps to do this are documented in the SAP Help.

Q:  Visual Difference is just container at this moment and cannot compare Universe at this moment?  Which version they will plan to upgrade it to allow comparasion between Universe, Webi and Crystal?

A:  Cannot be definite at this time; look at roadmap slide – past 4.1

Q:  If we need to move a *large* size content from 4.0 prod to 4.1 sandbox, can we use upgrade manager ?  Promotion management might not be robust enough.

A:  Supported in SP2

Q:  In 4.1 will it handle multi universe promotion without throwing false errors?

A:  Yes it will handle this.

Q:  In 4.1 will you be able to promote more objects within a single job without session timeouts and other issues?  Or will we still need to manually break folders up among several jobs manually?

A:  This is the case if you are dealing with jobs with a lot of jobs; consider Command Line Interface – see if that works.

A:  Yes, passwords are migrated.  There are some limitations in BV, but I assume this should are work.  If not, please log it as  defect.

Q:  Can LCM migrate/upgrade INSTANCES separate from the OBJECTS…? eg. Have LEGACY environment where One Object might have 15,000+ child-INSTANCES. Can that volume of INSTANCES be broken into smaller-chunks but still relate to the parent-OBJECT…?

A:  Technically this is possible using the CommandLine Interface (CLI), where you can specify the query that selects a subset of instances.  15k is such a large number.  I suggest you wait for SP2 where you can use the UMT.

Q:  Does LCM/PM validate the byte-size of the PROMOTED report Objects and Instances – to ensure that the PROMOTED files match 100% (ie. no “network” file corruption)..?

A:  No it does not, but that’s a good suggestion.

Q:  Is it possible to have the same environments set up as a source and a targetin Promotion Management? For example, usually move Test to Prod but sometimes need to move Prod to Test.

A:  Promotion Mangement is installed by default and should be on both the source and target.  So, you can do promotion either way, and this is supported.

Q:  dynamic BIAR file schedule should pick up if the latest objects added to to the folder. is it possible ?

A:  Unfortunate not if the job created specifically had those objects added.  However, you can you the CLI to create these jobs to achieve what you are looking for.  The query for the CLI would look something like this:  “exportQuery1=SELECT * FROM CI_INFOOBJECTS,CI_APPOBJECTS,CI_SYSTEMOBJECTS WHERE SI_PARENT_CUID = ‘Aal4VuDEhu1CoNh_oz16occ’, where the new objects reside in the folder whos CUID is ‘Aal4VuDEhu1CoNh_oz16occ’.

Q:  Will the overrides be simplified and stablized?

A:  It will be simplified when we do a UX redesign which is after SP2.  It should be much more stablized now.

Q:  If Visual Difference is just a container at this time, what is the benefit of of running this service?

Q:  Is there a clear method in LCM/PM to move the LEGACY BusinessViews that are required for Dynamic LOVs that are needed for CR-2013 content..?

A:  No not in LCM.  This will have to be taken with the CR/BV product manager.

Q:  Will it ever be on the ROAD-MAP to develop a THICK-CLIENT tool to Manage big LCM/PM jobs…? (Capacity issues appear to be related to the Web-based model).

A:  The plan is to use the UMT as the Thick-client in the future.

Special thanks to Kai Chan for this webcast and answering all questions.

The Promotion Manager tool does not bring instances and the UMT refuses to move content from one 4.x system to another. I am currently testing this on BI 4.1 SP5 Patch 5

In order to move content from 4.1 SP1 to this test box so we can run SP5 through its paces, what do you suggest?

Will they bring back some form of Import Wizard? LCM is a very poor tool and fails almost every time I use it. Some errors just say Failed with no clues as to why. Some errors on Partial Success say some blurb about not a tree and so I bailed. We need strength in this tool if this is the only thing SAP plans to provide us.

LCM won't even move a connection unless every universe it is used on is included in the Promotion job, even though it says all dependent objects are included...ridiculous. Most of our dashboards depend on scheduled reports, so what's the point in not bringing the instances with that content?

I see one answer above that maybe the UMT will be a thick client for moving content. Any idea when?

Hi Jon - I am not an expert in promotion management; could you create this as a new discussion in the BI Platform space so others can more easily respond?