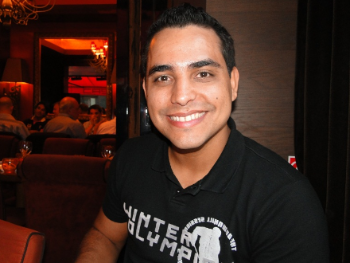 It is a pleasure to recognize an SCN Member of the Month in Latin America for the first time since the program inception in early 2012!

Marssel Vilaça is an SAP FI Consultant in Brazil, very active in the SAP ERP Financials discussions and very helpful in the Portuguese-speaking and Spanish-speaking areas of SCN. Impressive, Marssel! He is a football (sorry… soccer!) fan of course, like everyone in Brazil it seems, and a family man who likes to spend time with his wife and son and enjoy nature, barbecue and soccer games. As we talked on Skype, I teased him about the 1998 World Cup when Brazil lost against France 0-3 and he was a good sport about it. But he did talk about a “tragedy”.

I had a great time chatting with Marssel, quizzing him about professional reputation in Brazil when you are an independent consultant,social media, soccer and regional rivalries in Brazil, and I even tried to get stories of frightening jungle creatures of his time in the Amazon when he was in the Army, to no avail.Gali Kling Schneider and Tammy Powlas will be happy to read on without the fear of encountering the picture of a snake in this blog. 😉

Marssel, can you tell us a bit about yourself, where you live, who you work for, and other things you would like to share with the community (hobbies, fun facts)?

I am from Olinda, Greater Recife, state of Pernambuco in Brazil. I moved to São Paulo in 2005 when I started working as an SAP Consultant. I’m an Independent Consultant and currently I am running the final tests for the Brazilian roll-out of Atos Origin at Atos Origin. We’re going live in July !

I have been married for 4 years now and we have one son. Soon after you gave me the news about being the SCN Member of the Month I learned that my wife is pregnant with our second child. We are very happy and fulfilled.

I love to barbecue and have a beer. On weekends I mostly stay at home with my wife and son, or we visit my brother and his family who also live in São Paulo. Sometimes we go  to the coast or countryside.

What a great month this is ! I am wishing you a lot of success with your Atos project.

Thanks. Yes, we’re in the finish line. We are a team of 2 people per module MM, SD, CO and PS. Plus me for FI.

Something tells me that you like soccer. I don’t know, it’s either the fact that you’re Brazilian or your profile picture. Do you play soccer? And are you looking forward to the World Cup in Brazil?

I play soccer with my son, who is almost one and a half year old. Wherever he goes now he thinks that every spherical thing is a football.

The 2014 FIFA World Cup will be an event like never before in Brazil. Everyone is talking about it here and it seems that everyone has forgotten about their problems or the country’s problem. São Paulo, where I live, as well as greater Recife, my hometown, will host the world games.

Here in Brazil, soccer is almost a religion, it’s a part of who you are. One of the first things you ask when you meet someone is: what football club do you support!?I am a supporter of Náutico, a club in Recife, but to have more chances to win my wife I also turned into a São Paulo FC supporter.

There is some competition between states, Brazil is a big country. Each state has a tournament and then there’s a national tournament. E.g. Rio Flamengo vs Fluminese. There is violence at times, yes. If the club wins they celebrate and break everything. If the club loses the fans fight with the fans of the winning team.

The laws here in Brazil are pretty soft and there is no real law to control this. In England you can be arrested, not here.

On an interesting note: Brazil lost two women soccer world cups to the US. Our turn will be soon!

Where did you take one of your profile pictures with the FIFA World Cup?

That’s a funny story. Close to Atos’ office there was an exhibition of the world cups but I didn’t know about it. One of my colleagues told me about it and we went together. I show a “6” because Brazil was a champion 5 times and I hope next year will  be the 6th time 😆

You seem to be a fan of Social Media! I googled your name and found you on SCN of course, but also Google+, LinkedIn, Twitter, YouTube, About.me, and Yatedo. Can you tell me about your engagement on these platforms, what you like most, how you use them?

I use Linkedin more because it gives me a good visibility as an independent consultant. I use Twitter a bit to share interesting content, and Facebook with my friends. I learned how to use Twitter after reading several articles by Jarret Pazahanick telling about the benefits (see Twitter and SAP: What’s In It for You and Five Ways twitter Will Help Your SAP Career). But usually there’s not much time left in the week to spend much time on social media.

In your Blog it Forward post you mention that you were in the army in Brazil and spent “three intense years in the Amazon region as Lieutenant of Intendancy”. That must have been a hard experience! Are you willing to share what you learned during these years?

It was a great experience because I learned values ​​that are getting lost in the civilian world. I also thought it would be interesting to meet native tribal peoples because the Amazon is almost half of the Brazilian territory but 7% of the population. These people owned the land before my ancestors arrived in Brazil. These were one of the best times of my life. Almost all the friends I have today are from that time.

I was a Logistic and financial support Chef and also a Platoon Supplier Commander, and had many missions. We even supported to the inhabitants of the local region because long distances and difficult access to basic stuff was sometimes a problem for them. We helped people in many situations such as natural disasters, floodings, etc. I miss all of this, minus the scorching heat:  35 degrees Celcius with close to 90% humidity!
We walked a lot but I always told the team that we should be happy to be enjoying nature that other people pay to watch. Yes, I did see the occasional spider but in my house I see big ones regularly and we once had the visit of a 1.5-meter long iguana.

In 2007 my friend Roger Nose gave me the tip: If you need something you just open a forum thread and you will quickly get an answer. I started to use a few times and then naturally I started participating as a contributor.

Now there is so much content that I don’t need to open a thread, with a quick search on SCN I find what I need.

Of course, the discussion forums are very good since I find everything I need. I also like the blogs because they are good quality and they present a real opportunity to exchange with the SAP world.

I usually check my mailbox in the morning when I start my work day. I want to check if I got a reply from a comment I posted. Every time I stop for a break, I check e-mail notifications from SCN.

How do you find the time to contribute on SCN?

I use SCN as fun. Whenever I want to take a break from my daily activities, I get a coffee and I read a blog. I usually answer questions in the forums if it’s not too busy or at the end of my day.

I’m not a big mobile fan, so I don’t use the SCN app. I’m not interested in upgrading my phone because I would then spend too much time “playing” with the technology.

Are you one of these guys that logs on in the weekend as well ?

No my wife doesn’t allow it 😉 No SCN at home, she won’t hear “just a comment”.

Note from Laure: Marssel’s wife is smart! She knows how “just a comment” starts and then becomes more 😉 I’m guilty of doing this at home myself.

What do you like most about the community in general?

I like the people, we don’t have time to travel a lot and I love the Blog It Forward initiative, I like to get to know the people on a personal note. I’m very curious and like to learn about other cultures, for example the Indian culture.

What technology recently had you most enthusiastic about?

I don’t consider myself a tech enthusiast. To be honest I try to avoid because I don’t know how to separate things. If I started to get involved in a new, wonderful technology I’m afraid it would stop my social life.

What do you think about the introduction of game mechanics on SCN one month ago? I saw you’ve earned a couple of badges already.

I found it very good. On the first day I earned several badges with the missions. I think the work you have done will further influence the big companies to get their employees more engaged. Amazing!

SAP is an interesting world with a lot of projects available for independent consultants like me. I think it’s important to showcase your content and expertise. I also strongly recommend a presence on LinkedIn.

Every day I invite several people to join the community. I am trainer at SAP Brazil and in my classes I always save time to introduce SCN as a content source. I also emphasize the great reference that the reputation program can add to your career.

I also admire the tireless work of the following moderators: Eduardo Chagas in the Portuguese-speaking community and Eli Klovski in English-speaking ERP Financials.

I also want to give a shout-out to the very active members in the SAP ERP Financials space:

Note from Laure: Below you can find more of Marssel’s content in a local language:

Every month, a member of the SAP Community Network is recognized for exemplary behavior: sharing knowledge with peers, being helpful and taking on additional tasks to support community engagement. See the list of previous SCN Members of the Month.

You are well done.

Thank you very much Wadiaa! 😀

Happy to read this blog and nice also.