I have been blogging on IT carve-outs and their importance so far. So here comes a first Definition of what it actually is.

While the term demerger hits the core of the concept – namely disintegration – and is commonly used in practice, it is problematic as it implies a preceding merger. The term carve-out is basically used as synonym, which appears to be less restrictive. Broyd and Storch (2006) and Buchta et al. (2009) define a carve-out as the operational activities needed to conduct a divestment, in which the carve-out object is established either as a stand-alone organization or merged with another organization.

A carve-out typically includes the actions required to de-integrate the IT systems of the carve-out object from its parent organization. In this vein, Leimeister et al. (2008) define the IT carve-out process to include the separation of all shared information and communication technology related activities.

To conclude, I typically use the term divestment or divestiture to refer to the financial or corporate strategic aspects of separating a business unit from its parent organization. The term carve-out covers all operational activities needed to implement a divestment. Finally, the term IT carve-out refers to the activities needed to separate a carve-out object’s IT assets from its parent. 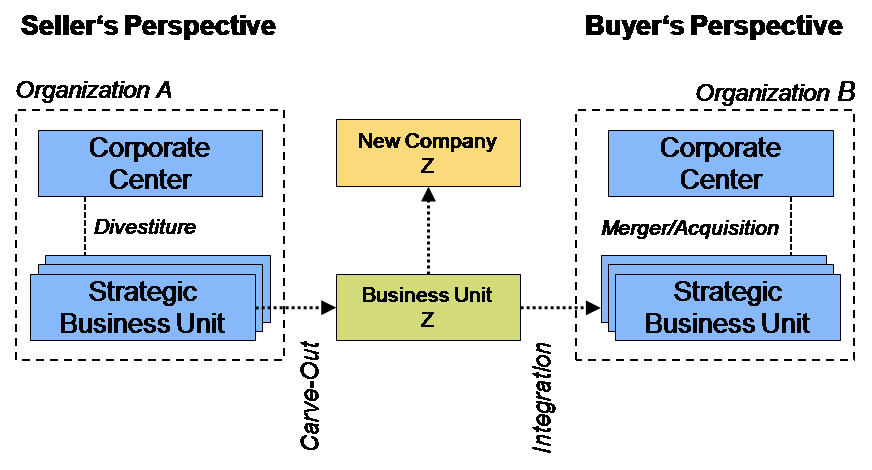 In the figure above, I try to illustrates the different perspectives of the buyer and seller to clarify the different terms. The seller takes the strategic decision to divest a business unit. This leads to a carve-out project separating the business unit from its parent’s organizational structure. Sub-projects are responsible for different functions including legal, financial, tax, human resource, production and IT issues (Leimeister et al., 2008). The result of the carve-out project is an independent viable unit that can either be integrated into another organization or operate as an independent, standalone organization (Broyd and Storch, 2006; Müller, 2006; Buchta et al., 2010). In the former case, the buyer manages a post-merger integration (PMI) project to realize synergies by integrating the business unit into the new parent organization (see, for example, Wijnhoven et al., 2006; Mehta and Hirschheim, 2007; Henningsson and Yetton, 2011).

Henningsson, S. and P. Yetton (2011). Managing the it integration of acquisitions by multi-business organizations. pp: Paper 7.

Great overview Markus. I would like to make the SAP Community aware of an upcoming webinar on this topic: "SAP Carve-outs: Automated." It is sponsored by SNP (www.snpgroup.com).

May 24 @ 2PM EDT - If you can't make it or see this post after the webinar date, you can still view on the on-demand version at this link.

You can register for the webinar here:  http://software.snpgroup.com/mission-expert-webinar-5

A quick abstract of the webinar:

SAP Carve-outs, dilutions and divestitures are incredibly complex transformations. So many choices must be made and the time-line is always compressed. Critical information needed to run the business must be supplied to the buyer while at the same time protecting sensitive information from a potential competitor. Each one of these decisions has far-reaching impact from preservation of history, master data relevance and compliance. The solution is simple: Automate.

In this webinar you'll discover how to leverage pre-defined transformation content that eliminates man-years of effort and risk in your SAP carve-out project. Yes, the tedious processes of complex carve-outs can be automated for fast, secure results, with the added benefit of automated audit trails.