Climbing the NBA draft board with Victor Oladipo

A year ago at this time experts were creating versions of mock 2013 NBA Drafts. Names like Nerlens Noel and Cody Zeller and Shabazz Muhammad showed up ubiquitously in the top 5. A notable omission from those lists was Victor Oladipo; notable now because he was taken second overall yesterday at the NBA Draft in Brooklyn, New York (where viewers were provided with statistics powered by SAP and NBA.com/stats).

The junior guard and Cody Zeller’s teammate at Indiana, was not mentioned in any of the 2012 rankings and wasn’t on any experts’ top 50 players list going into the season. What happened between then and now? 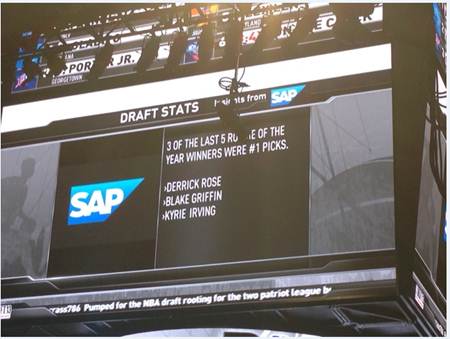 Oladipo decided to stay at school over the summer and work on his game. “I decided this past summer to stay in school all summer and go to school and work out,” he told ESPN. “I feel like when you’re in the gym and you’re working on your game that’s when you build your confidence.”

It is music to a general manager’s ears when a player is called a “gym rat” or “competitor,” like Kobe Bryant, Michael Jordan, Steve Nash, and LeBron James often are. By staying at school while others went home, Oladipo could spend time in the gym and class with less distraction. Many companies strive to have their employees show similar dedication and immersion; tech companies know the importance of nice work spaces and some tech companies like Google, for instance, are going into huge efforts to make the workplace a desirable place to be for long, hard hours of work.

For Oladipo, the decision paid off. His numbers from the time he entered school until now have greatly improved:

This increase in production shows a serious commitment to getting his game right during the offseason.

In a podcast just before the draft, ESPN’s Bill Simmons said of Oladipo, “I don’t think he gives a crap about anything other than trying to go out and win games. I thought he got better at Indiana. I like the pressure he played in last year. I think that helps him.”

In basketball and in business there is no exact science to evaluating players and employees. Sometimes you need to swing for the fences and take a chance on an unproven player, other times you want to know what you are getting. Victor Oladipo is as close to a sure bet as you will see in any NBA draft because he has constantly improved and shown he can play for great teams in important games

Through its partnership with the NBA, SAP is providing stats during the draft.

Great story and love the analogy.  There is a lot to be said for hiring "athletes" for their potential.  Oladipo's time in the gym is no different than the employee who is eager to learn and figure out how to get better at any skill.   While there isn't an exact science to evaluating players and employees, assessment on "soft skills" or behaviors is critical. Oladipo displays an amazing amount of dedication and persistence to be able to make improvements across the board.  It's crucial that for employees, we look not just at the numbers, but at the behaviors the enable those numbers!

Further proving the old adage, "Anything worth doing, is worth doing right".  Looking forward to seeing how he transitions to the NBA.