“If we’re going to out-innovate and out-educate the rest of the world, we’ve got to open doors for everyone. We need all hands on deck, and that means clearing hurdles for women and girls as they navigate careers in science, technology, engineering, and math.”

Improving the participation of women in the Science Technology Engineering and Mathematics(STEM) sectors is a focus area for most governments all over the world. There is unfortunately still the cultural belief that STEM sectors are male domains which acts as a barrier to girls’ and women’s participation in these fields. A recent article by Wendy Tan White, confirms that even in the Tech Industry, girls still view the sector as ‘Geeky and not for girls’.

The question of what practical steps need to be taken to bring about this improvement still remains to be answered by many. One of the ways we as young women can play a role is through sharing our experiences (in an appealing and fun manner) and encouraging other young women to take up STEM careers as it truly offers diverse career opportunities.

I was blessed this year to have been selected as an Emerging Leader for the TechWomen programme. TechWomen is an initiative of the U.S. Department of Bureau of Educational and Cultural Affairs. I believe that my selection came as a direct result of my involvement in the SAP Community, specifically the SAP Mentors Programme! The TechWomen Programme was developed in response to President Obama’s efforts to strengthen relations between the United States and the Middle East and Africa. Former Secretary of State Hillary Rodham Clinton first announced the TechWomen initiative on April 28, 2010 during President Obama’s Entrepreneurship Summit. This programme empowers, connects, and supports the next generation of women leaders in science, technology, engineering, and mathematics (STEM) from Africa and the Middle East by providing them the access and opportunity needed to advance their careers, pursue their dreams, and inspire women and girls in their communities. From the 1st of October, the Emerging Leaders will spend 5 weeks in San Fransisco and Washington. For more info on the Programme visit the TechWomen website.

The program selected 78 women from 16 countries. See the graphic below.

I’m a visual person so I wanted to see what 16 countries were represented by fellow Emerging Leaders. What better way to represent this data than using SAP Lumira as I had recently installed the personal edition of SAP Lumira (which I bought when during the #BI2013 special…sorry if you missed it…thanks James Fisher for the heads up!).I decided to extract this data from the contact list that Lexi Curtice(TechWomen Program Coordinator) posted on the Techwomen Facebook group. The document was in PDF and I used the text import functionality to paste it into Excel. I obviously had to filter out some of the info, i.e. the leaders names and contact details.

I then imported this data into SAP Lumira as an MS Excel datasource.

When I looked at the imported data, I could see that some of the member countries’ names were cut off, i.e. Palestinian Territories, Sierra Leone, South Africa. I had heard of the data cleansing/manipulation capabilities of the tool…but where do I find this?

I remembered this from one of Tammy Powlas‘ blogpost. I found quite a few nifty manipulation options, i.e. splitting a column, converting the text lower case. I found the “Find and Replace” option, which is what I needed. I could now replace the three member country names to the correct ones.

I was now ready for the exciting part, deciding which visualisation option to use! I first had to set my count column as a measure by right-clicking on the column name (in the Attributes) and selecting “Create a Measure”. I selected Tag Cloud from the visualisation option. I could now see the list of countries.

The next option is the Heat Map.

Another really cool chart that I played around with is the Radar Chart.

The last chart that I explored is the Geographic Bubble Chart. I used the Country Attribute hoping that I could just right click and create a geographic hierarchy by Names (seemed easy enough)This seemed to work for only 15 of the 16 countries, there was one country that remained unresolved. 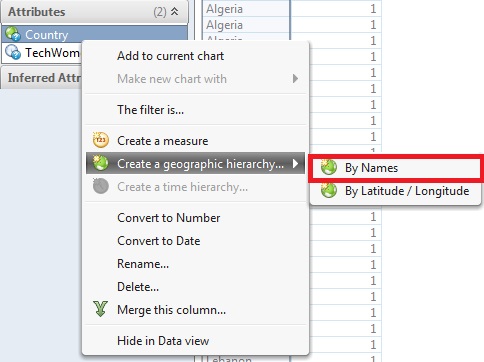 This meant that I was now forced to use Latitude/Longitude option. I had never used this option before and felt I needed to find instructions. I managed to find the official tutorials. I used the Enhancing GeoMaps with Latitude Longitude tutorial(lasted 2min.36sec). I found a listing of the longitude and latitude values from this website. I change my initial datasource(my MS Excel Spreadsheet) to include these two columns, for longitude and latitude. I was a bit concerned about whether I would need to redo all my charts, but was glad to see that the system was intuitive enough to pick up my new columns. I went to the Data option on the toolbar > Clicked on Edit Datasource. The two columns appeared (deselected/greyed out) I selected them and my datasources was now updated….BEAUTY 😎 

I could see my two new columns have been added to the Attributes and I could create the geographic hierarchy by Latitude/Longitude. I then dragged in the measure, including the country from the CustomGeo hierarchy into the dimensions. The Bubbles appeared, but with no labels. I selected the labels from the drop down(right next to global filters)

I really had fun creating the various visualisations and an hour I had all my samples. The part that took the longest was capturing screenshots and documenting all my steps. If you are someone who loves visualising data, give SAP Lumira a try! (Contrary to popular belief, I don’t work for SAP…so I have no sales interests here!)It fortunately has a FREE Personal Edition that you can test drive…YES, you that’s right, it’s FREE!

I did try to replicate my steps in the SAP Lumira Cloud version but was disappointed in getting a blank screen when trying to import my data. Perhaps I’m doing something wrong or it might be my old Windows laptop…I will investigate and write another blogpost regarding this. Once I can upload my dataset onto LumiraCloud, I’ll definitely create a follow up blog post on how I can view this visualisation on an iPad using Mobile BI ver5..(check out Andrew Fox‘s blogpost )

I was quite impressed with the geographical bubble chart and I sent it to the rest of the TechWomen Emerging Leaders and I received some really great feedback. 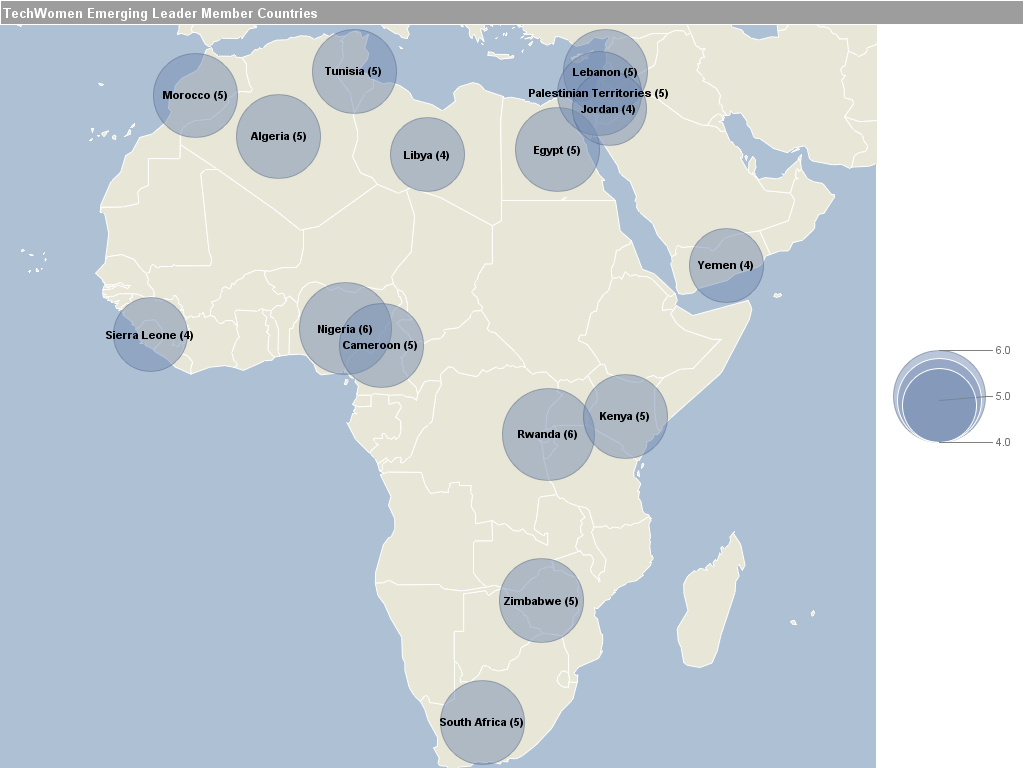 I can honestly say that from interacting with this amazing group of women I have no doubt that San Fransisco will be electrified when all 78 of us arrive in October! Watch this space for more blog posts to come regarding the TechWomen Programme. Women in Tech Rock-On!!!!

Congratulations on your achievement and selection and thank you for sharing your Lumira knowledge.

Good luck with the program too and enjoy.

Ok, just sent off an email to datageek..thanx:)

Great use of SAP Lumira, and I love your resourcefulness in getting tips and tricks for creating your visualizations.

Fantastic post, zimkhita buwa ! The TechWomen programme sounds like an amazing opportunity. Best of luck with it 🙂

For those who are looking for the 30-day trial download link for SAP Lumira, here you go: www.sap.com/trylumira

I just stumbled over this blog via another blog of yours. Really great data story and it makes me want even more to try out this Lumira, but still I have yet to find a good idea for what exactly. 😀 I'm a very visual person like yourself, so I know I would have a lot of fun with this.

I hope your stays in San Fransisco and Washington are a lot of fun and the programme is everything you hoped it to be! 🙂

Why not take a look at the different types of Data that we currently have available. - We've compiled a list HERE that you can use!!

Once you've created it, throw up some of those striking visuals, and get rewarded! The Data Geek challenge is still on!

Hi Steffi Warnecke thank you so much for taking the time to read the blog post.

The Programme is actually taking place now in San Francisco! You can read about my experience on the blog post below.

Hopefully you'll follow Irshaad Bijan Adatia's advice on the data that you can use if you wanna start playing around with SAP Lumira.

I'll look into the other blog to see, what you all were up to. 😀

About the Data Geek Challenge: I didn't see that page before, so I'll browse through there to see if something clicks with me. Thank you, Irshaad Bijan Adatia for pointing it out! 🙂

@Steffi - I'll be looking forward to something soon 😉

@Zimkhita - I hope you're enjoying SFO! It's great to see women in technology!

Fantastic simple use case for Lumira! Thank you very much.