“It feels a little daunting, the entire challenge – the closer we get to the day, the more scared we become,” admits Jesus Gonzalez of Bluefin Solutions.

Gonzalez signed up for the SAP Cycle 4 Youth challenge as soon as he received a mail from Bluefin CEO James Appleby. He liked the charities involved, the cycling, and the personal challenge – covering 810 kilometers in five days. 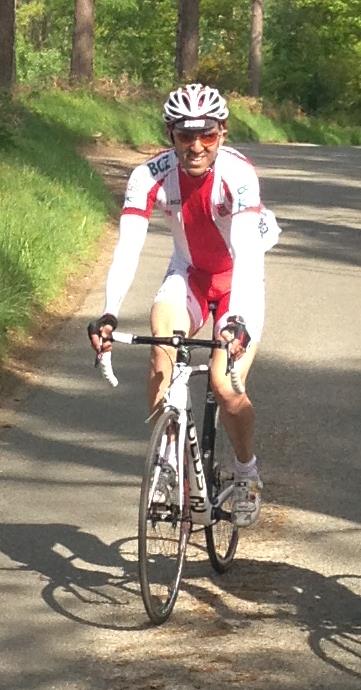 He says the Bluefin participants really started training hard about three months ago, riding as much as possible. Though the weather has improved over what was a considerably cold and rainy spring, Gonzalez still finds himself logging miles indoors on a trainer during the week to ensure he’s fit enough while
accommodating daily schedule constraints.

He and Appleby are mentoring some of the less-experienced participants from the UK leg. “You have to be honest with them,” he says. “Keep the motivation going, helping them with pedaling technique, supplements, recovery drinks, and eating constantly to keep energy up. “We’ll need to set a tempo that everyone can maintain.”

Thirty-six year old Gonzalez says he began cycling when he was 12, and competed seriously for several years when in his twenties. His longest day in the saddle was riding the 260 km long Tour of Flanders, a grueling race known for its length, bad weather and rough roads that include lots of cobblestones. He’s done the race twice.

“Eight hundred kilometers in five days without a break I’ve not done. You need to keep a steady tempo. I know what it’ll do for fatigue, what’s needed for recovery,” to help survive the next day.

Though a lot can happen during each day’s ride – flat tires, fatigue, crashes, slumping morale – Gonzalez says that recovery will be as essential to making it through the challenge. An experienced athlete, he points to drinking a lot of water, stretching, massage and sleep is important to help his muscles recover from the day’s exertion. He plans to eat ant-inflammatory, omega-rich foods like mussels, which will be particularly plentiful when their route winds  through Belgium.

Though he feels prepared and has the skills and experience, Gonzalez is realistic and knows the challenge will be difficult. “I still would like to keep it fun. It’s going to be long hours on the saddle, so we’ll need to talk, stop, do things to maintain a light atmosphere.”