The Long and Winding Road, from London to Walldorf

For James Appleby, the journey started about four years ago when, as he says, “I swapped the pub for the bike.” To get fit, he and some friends got into training for a triathlon. “It didn’t take long for me to figure out I don’t like running or swimming,” he added. But the cycling part took off. 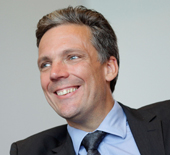 Appleby, CEO of Bluefin Solutions, who came up with the idea for SAP Cycle 4 Youth, has convinced nine of his staff to join him and take up the challenge,
covering 810 kilometers in five days as they ride from London to Walldorf, Germany. In addition to the riders Bluefin is fielding, there are a handful of riders
from SAP UK and another business partner riding from London.

The goal for the UK team is to stay together as they turn the pedals towards Germany. Appleby says he started training about six months ago, and now gets out several times a week to put kilometers in his legs. “Now we’re riding together as a group – we have a real spectrum of participants, one who bought a bike in March. The thing with this kind of a ride, you need a huge volume of training.”

Covering on average 162 km per day makes for a long day in the saddle. Appleby, whose longest single day ride was 200 km, is realistic. “This is a whole different level,” he says. “Day four will be hard. That’ll be a hilly ride, and in total we’ll be climbing about the equivalent of Everest.”

SAP Cycle 4 Youth isn’t the first charity ride Bluefin has undertaken. Since he began cycling, Appleby has shared his enthusiasm with his colleagues at Bluefin with an annual office cycling event. In 2012, they rode the London Olympic road cycling route as an office team-building event. Appleby cites growing interest in the sport as more and more professionals take up cycling. “It’s becoming bigger than golf for professionals over 40,” he says, though it’s still a ways off before it surpasses golf’s popularity in professional circles.