New column to have new values with custom formulas doesn’t work in the SAP ViZi 1.0.9 as expected

If we see different requirements from Users point of view SAP’s ViZi 1.0.9 don’t have the provision for the below options as
observed in the trial version.

INSERT: While doing the analysis with the DATA users will create their own formulae to have “what if” kind of analysis while interacting with SAP’s ViZi tool. As part of this requirement Users may required to introduce new column to have their
own custom formula values for the comparison or analysis however this tool doesn’t provide a provision to INSERT new column which users usually expect.

UPDATE: As aforesaid we don’t have provision for inserting new column hence we’ll copy or create a duplicate column with the requirement column format and rename it.

For ex: In The below screen I’ve introduced a new column by duplicating the “Amount” column with formula “Amount*1.2”.

Note:
The data used to create this blog is Dummy data and not pertaining to any
customer 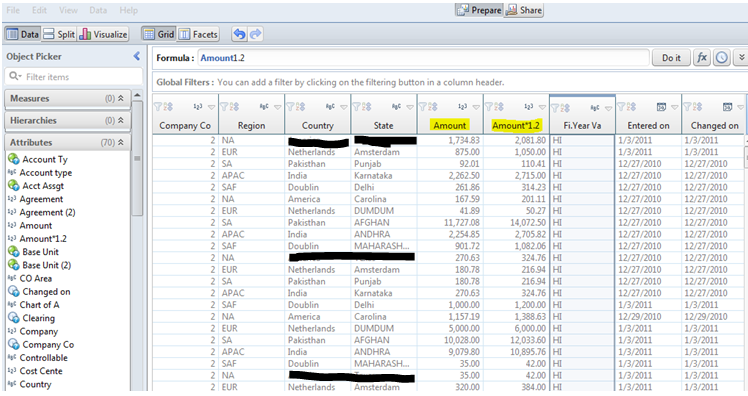 In the below screen I renamed it to “Target”.

Now I came to know that my formula for “Target” is not correct and required to change based on some conditions and hence I would like to update this “Target” field with the new formula hence I changed the formula as you see in the below screen shot and applied operation “Do It” then rather than updating the same column it created a new column with name (if Country = ‘America’ then Target = Amount*1.2 else Amount*1.5) similar to Formula which user’s basically doesn’t expect. Though it created the new column it didn’t update the values for all the records rather it updated True or False based on the previous target field Values which is not desirable from end user point of view. Then I renamed the column with Target and it created Target(2) automatically to just
try if it provides any prompt saying the field already exists. 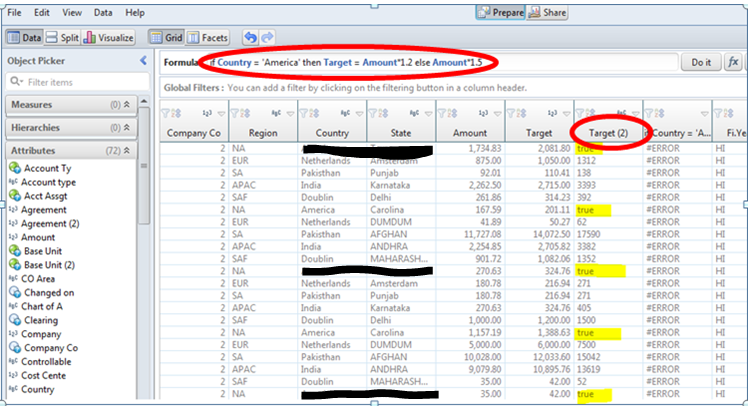