The Greatest Ever: LeBron vs Jordan

The Miami Heat have won back-to-back NBA Championships, bringing LeBron James his second ring. But does this bring him the coveted title of “Greatest Ever”? Michael Jordan is still regarded as the legend on top and rightfully so. We can compare points per game, shooting percentages, MVPs and championships, but lets do things a little differently. Let’s listen to the social web’s opinion on the matter. Who is better, MJ or LBJ? 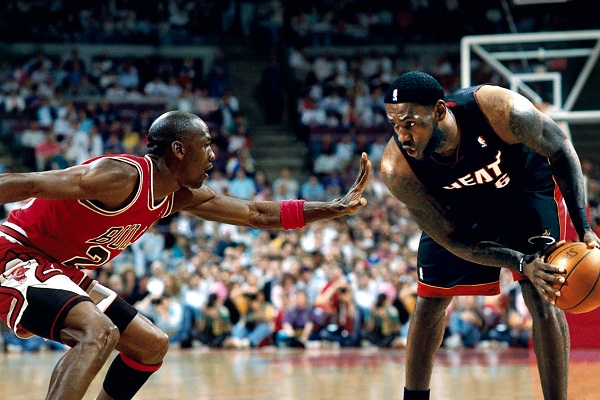 People flocked to social media during the NBA Finals and their opinions are reflected in these analytics. With SAP Social Media Analytics by NetBase, we can do a side-by-side competitive analysis between LeBron James and Michael Jordan. Do these insights crown an outright “Greatest Ever”? Absolutely not! But it is still cool to see what the web has to say about these basketball greats! Perhaps we can determine which player is more well-liked… Click on the graphics to enlarge view.

A summary of the social metrics reveals that LBJ is edging out MJ in everything from posts to passion intensity (sentiment associated with strong emotional words), however, note the net sentiment scores. Michael Jordan is winning in this department 50% to 34%. A score of 30% reflects an average score for a brand and these scores can go negative as well.

Looking at a year’s worth of sentiment we can see positive and negative trends as time has passed. For LeBron, there is tappered activity at both ends due to the 2012 NBA Finals as well as 2013 NBA Finals. For Michael, there is a huge positive spike in mid-February. Why you ask? February 17, 1963 is MJ’s birthday! His 50th B-Day overshadowed both of LeBron’s championships. Does this say something?

With a peek at the top attributes for both players, there is a lot that has been said. For LeBron, he is considered the “best player in the NBA”. You also see the words “better than Michael Jordan”. For MJ, there is talk around him “winning back-to-back regular season MVP”, something LeBron has done twice. However, “best basketball player” is still being said even with Jordan out of the league for ten years. 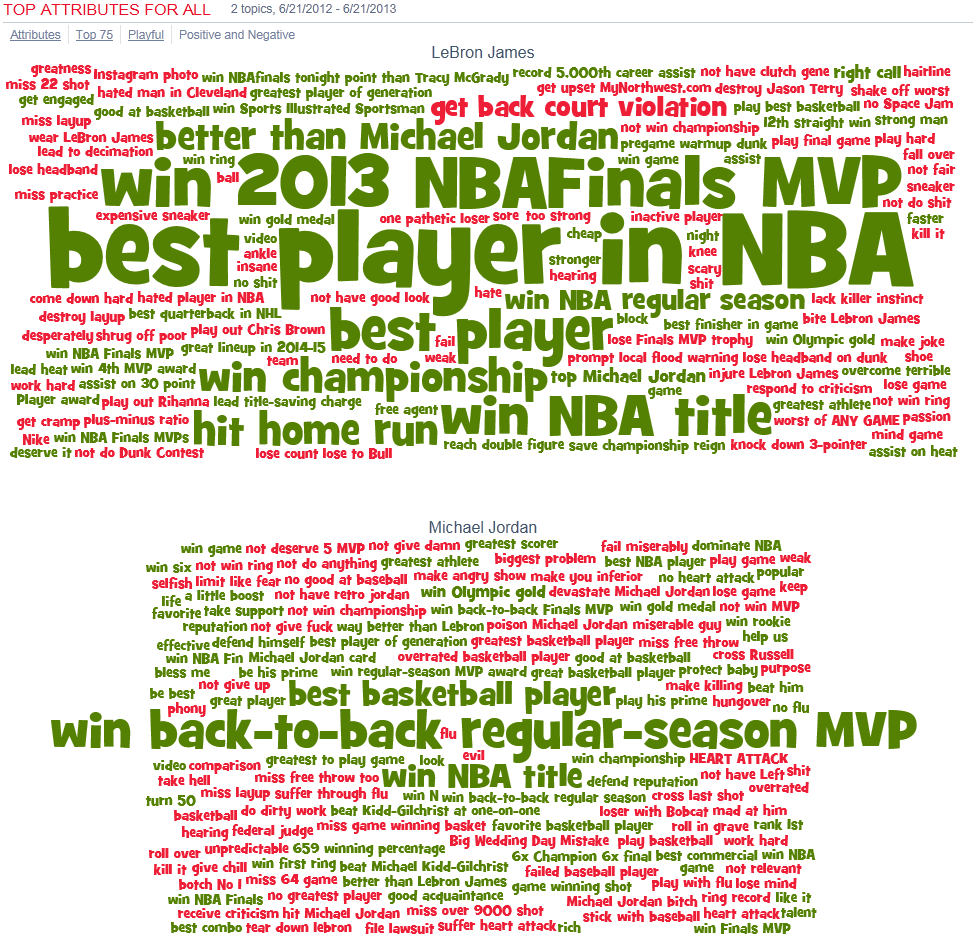 Finally, a look at the sentiment reflects the battle of this debate. This sample of the stream speaks for itself. #legend #ProvenFact

This was just a quick look at what the social web has to say about LeBron and Jordan. The reality is, LeBron has a lot of catching up to do. Everyone from analysts to the casual spectator has their own opinion, but Jordan still edges LeBron out in many categories, including NBA titles. King James is a great player and is no doubt the best in the NBA today. However, this is one of those things that isn’t worth losing friends arguing about. Yet again, time will tell. This is a debate that should be revisited once LeBron has retired from playing the game. We may have to wait a while for that to happen…

I need to set the record straight.  LBJ is reserved for Lyndon Baines Johnson the 36th president of the US.  I think you should use the Air Jordan -vs- King James as those are the more frequently used nicknames.  What I found interesting in all of this was the number of hits for Jordan on the www even with him being retired for 10 years.  Pretty amazing.

I don't actually believe that anyone deserves the moniker "Greatest of all Time" (except Ali, he was the self annoited greatest and made the nickname stick!) as there have been some truly great players in all of the eras.  Jordan did dominate the game when he played and won 6 championships but what about other players?   Jabbar, Magic, Bird, Robertson, Russell, Cousey, West and Chamberlain to name a few.  From a championship standpoint the crown goes to Russell with his 11 but we all know the NBA wasn't as strong in those days.  All of the others had their fair share of accolades as well.

The great thing about sports is that we can have this discussion.  Feel passionate about our teams and the players invovled.  Post our sentiment on the web and have Sir Jake run an analysis using NetBase.  Is this a great product or what?

LeBron is awesome but it's Jordan hands down.  MJ had less team talent to work with and could simply will his team to win.  LeBron couldn't win it all until he joined what amounts to an all-star team.

Steve, I have to disagree.  Less talented team?  I bet if you asked Scottie Pippen and Horace Grant they would vehemently disagree.  The teams look pretty similar to me.

I have to agree with Paul. When it counts, Chris Bosh does NOT play like an All-Star. And Wade was banged up all postseason and was extremely sporadic. LeBron has completely carried the Heat in the postseason both years they won championships and up until the finals in 2011.

I think MJ had as good if not better talent around him. Pippen was nasty. Horace Grant. Ron Harper, etc.

Not even MJ could have won with LeBron's Cleveland team. Worst team in the NBA once he left.

Very interesting, thanks for sharing. I've to say that to me LeBron isn't even the best player in the game right now. He did have a great Game 7 and was finally able to make some jumpers when he was left open. But there is a reason the Spurs left him open and gave him space to shoot. To me there are better or at least as good players in the league today. And to call him the greatest of all-time is wrong. Look at Tim Duncan and what he has achieved throughout his career.

If LeBron isn't the best player then who is?  Tim Duncan has had a great career and is certainly a hall of famer but if he was the best he would have prevailed in this series.  Give me a little more than this as to why he isn't the best in the game today!

Oh, and the spurs strategy to give him space didn't really pay off all that well when you look at the stats.  Not to mention all the threes he hit in game 7.

If you are only counting rings then Duncan is clearly ahead of James. As is DWade and couple of others.

Looking at the stats I'd say that the strategy clearly payed off. The shooting percentage for FG and 3PT are down compared to the total for the playoffs. Same goes for PPG which is also (slightly) down. So instead of giving him a chance to drive and score a dunk or layup or find an open shooter which has lost his helping defender you make him shoot the ball and get the rebound.

So what exactly did he do to decide the last two games? He fumbled the ball in game 6 and would've lost the championship there. He missed the game tying shot and was bailed out by the Spurs when giving up the defensive rebound by taking out Duncan. That was a horrible coaching decision in my view and RayRay took advantage. Still we would not have seen a game 7 if the refs would've let 'em play directly after the three as Miami was out of position and the Spurs would probably have had the final shot on a fast-break.

In game 7 he finally made them pay but still, to me the decisive factor in game 7 was Shane Battier.

Anyway, Miami Thrice will be history after this or the next season when a) luxury tax kills Micky Arison and b) the King will leave again to take his talents back to the Cavs after they have acquired two top draft picks in recent years. Will be interesting to see how his career progresses.

But we're clearly not just counting rings. And Wade's last two came on the back of LeBron. Also, Bron is 28 (2 rings), Duncan is 37 (4 rings). I think LeBron will win at least two in the next nine years.

And you can't forget in Game 6 that LeBron completely brought that team back from the dead after being down 13 at the end of the third with 14 fourth quarter points and some steals. He outscored the Spurs by himself for most of the quarter and made the 3 before Allen's to pull it within 2. Had some blunders yes but still deserves credit for most of the comeback.

LeBron is clearly the best player in the game right now... Hence the MVP after MVP he gets. His stats have always shown that, and now the championships are coming. When it's all said and done he will probably be right there with Jordan, and the only current players that will have careers close to as good as LeBron's are Kobe and Duncan.

I do agree that LeBron will go back to Cleveland after next season to go play with Kyrie Irving and whoever they get in tomorrow's draft, and as an Ohio native I can't wait for that.