You usually hear a lot of rule of thumbs and known expertise about a topic like database cache size or handling of such caches. Sometimes the cache topic is also used as a “silver-bullet” without a deeper investigation of the real root cause and some customers just follow the recommendations of their consultants without questioning. But you as customer should always question the recommendations and get the idea behind them (maybe there is none).

Cary Millsap, a well known Oracle performance expert already expressed it this way (and i really like the idea of it):

“People think that consultants get paid for having the right answers, but we don’t.

We get paid for convincing people that we have the right answers.

The way you do that, is by showing them the exact process that led to your conclusion.”

I must admit, that this section is going to disregard a lot of details about the SGA, its structure, working data sets, different linked lists and queues, but otherwise this blog would be come very large and complex, if i include a lot of these details here as well. In this blog we just want to explore how one (physical) data block can allocate multiple cache buffers. Please let me know, if you are interested into some of the other details as well – so i maybe write another blog post about it.

“A picture tells us more than a thousand words” – let’s start with a tiny illustration of the buffer cache organization. 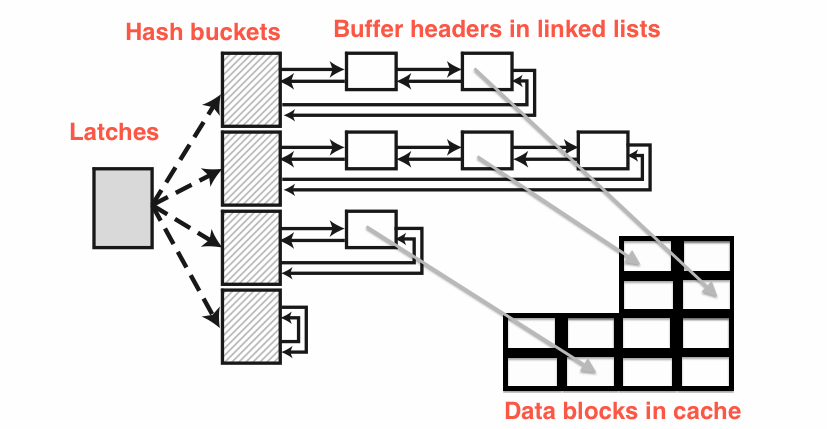 The database block buffer headers (which point to the real cached data blocks) are hashed and attached to a corresponding hash bucket in a short double linked list. These hash buckets are protected by latches.

Here is a short summary of the most important facts:

Let’s illustrate the basic procedure for reading a data block:

That’s it – i already stop here with explaining. This should be enough “basic knowledge” to understand the following demo case and answer the question “why one data block can use multiple cache buffers”.

*** Side note: Maybe you have already noticed a wait event called “latch: cache buffers chains” by troubleshooting performance issues, if several processes try to read a lot of data from the database cache (due to bad SQL execution plans or insufficient database structures). This is typically caused by a contention at step 2 from the procedure above.

Test case – One data block can use multiple cache buffers

All of the ten rows are stored in the same (physical) data block (93529) in data file 1. Now let’s research what happens with the database cache (and the buffer headers), if we update these rows in several ways.

Remember: All of these rows are all placed in the same physical 8 kb block and so they only need 8 kb of “physical space”.

One buffer header (for physical block in file 1 block 93529) is attached to the linked list as we just read the data by a full table scan before. We should clarify the selected columns of X$BH, before we go on with the DML statements.

HLADDR = Address of the latch, that protects the corresponding hash bucket

The other 2 columns should be self-explanatory. Let’s verify the latch by its address to be absolutely consistent in our assumptions.

As assumed the latch address corresponds to the “cache buffer chain latches” and my test instance got 1024 of these latches. This covers the previous hidden parameter value (check “Initial settings” section) of “_db_block_hash_latches” as well.

In the following section i will update one row after another and query the buffer cache header array afterwards. Please look carefully at the columns “HLADDR”, “STATE” and “BA”.

Only one additional block is needed, even if you update several rows by one DML statement (changes are done to the same block only).

We have seen, that every DML statement allocated and used a new block in the buffer cache (different values in column BA, but the same physical block) and attached the corresponding buffer header into the double linked list. This works until the limit of “_db_block_max_cr_dba” is reached. This limit is implemented to keep the linked lists as short as possible. Notice the state of the blocks – you have one current version of the block and several “older versions” of the block that can be used for consistent reads (like long running SQLs).

*** Side note: I already observed, that the limit of parameter “_db_block_max_cr_dba” does not count in any case (maybe due to bugs). I was not able to reproduce a corresponding test case on my Oracle environment with database version 11.2.0.3.2.

Finally we have only one assumption left: “All of these blocks are attached to the same hash bucket and linked together”. Previously we just queried the HLADDR (latch address) and it was always the same, but one latch covers 32 hash buckets – so we can not be absolutely sure about it at this point.

The easiest way (for me) to cross-check this is dumping the information about the buffers. 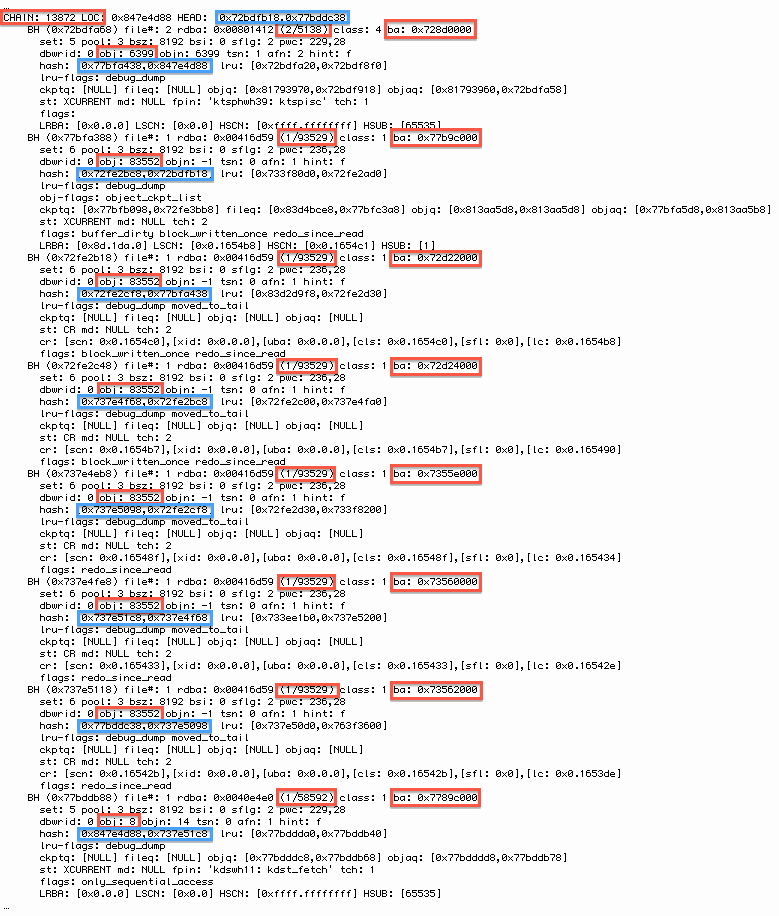 So this particular hash bucket / double linked lists consists of 8 buffer headers. You can reconstruct the “linked chain”, if you follow the blue marked addresses. You will also find the corresponding data buffer addresses as published through X$BH. The current version of the table block is always the first one (of the corresponding database object) as you walk down the linked list (“performance” optimization).

*** Side note: This particular demo case works with DMLs and full table scans only (Switch current to new buffer technique), but it is the easiest way to demonstrate such a behavior in the buffer cache. If you look closely at the BA column, you will see that the newly created “xcur” buffers are copies from the previously current ones.

Statements like “database cache size = database size = fully cached” are not true at all as we have demonstrated, that one physical data block (8 kb) can be stored multiple times in the database cache (in our case 8 kb * 6 = 48 kb).

You maybe wonder now, why do we care about this as we usually have indexes defined (in a SAP environment) and a DML statement does not use a full table scan at all. This is true (for most of the well written application/business logics), but a similar technique is used, if you need a read consistent block for long running SQLs. Oracle cross-checks the SCN of the current block in buffer cache (we assume that is already there now) when reading a data block, but Oracle needs to create a read-consistent copy of the block, if the block SCN is higher than our query SCN.

If Oracle notices such a SCN mismatch, it walks down the linked list furthermore, because it is possible that an appropriate read-consistent copy (column “STATE” = cr) already exists. Oracle reconstructs the block (by cloning the XCUR block and applying the undo) and attaches it, If there is no suitable version available.

Very interesting blog! This will for sure eliminate a lot of assumptions in this area..

Thanks for sharing. Article helped me to eliminate the myth related to DB cache,