Moving Into the Arena: A Lesson in Inspirational Leadership

AtelierSAP  is a unique community of senior ex-SAP executives, largely engaged in current entrepreneurial pursuits. As part of my participation in the Leadership Excellence Acceleration Program  (LEAP) at SAP, I attended their third annual leadership event.  I was humbled to be in the company of such an accomplished group. I came away from the event with many pages of notes, two partnership possibilities to investigate supporting my current role, and one viable future mentor to connect with.

Primarily, however, I walked away pondering a singular theme that spoke to me personally and surfaced repeatedly throughout the session: inspirational leadership. What does it look like today? Who has it? How do you attain it and model it? In a world where inspiration comes from pop culture (non)superstars and overpaid, over-drugged sports figures, how does a “steady” life in business inspire the Millennials of today?

Several speakers touched on the topic throughout the two days, but two presenters in particular resonated with me. Each integrated their own points of view to reinforce the call to action: more than ever, every organization needs more of it. (all photos permission and credit: www.conradlouischarles.com )

Les Hayman, ex CEO/Chairman SAP and SAP EMEA and Global Head of HR, presented “Ten Rules of Management”, where inspirational aspects were woven throughout. Starting with the premise that management is more about how you manage yourself, rather than how you manage others, he made the case that understanding yourself (your beliefs, ethics, the environment you create) is the key to inspiring others. Without this baseline, there is no foundation on which to build credibility, passion, results. You need to provide people with the “freedom to fly”; to take their strengths and provide the safe climate to permit running with them, always keeping in mind it is “meant to be fun” along the way.

Luisa Delgado, ex-member of the Executive Board and Global Managing Board of SAP AG and former Chief Human Resources Officer, also spoke to us. Joining the event via Skype from SAP’s headquarters in Walldorf, she commented that discretionary effort of the individual is the true differentiator today – and having leaders that inspire work effort above and beyond being a new standard as operating practice.  Leaders who create an environment where people truly want to do more, where emotional intelligence is more important than intellectual intelligence, where heart is becoming more of a key attribute in business strategy – these are today’s inspired few.

Who has inspired me personally?  It’s a small number…people with vision, steadfast beliefs, people of action. Steve Jobs, Hillary Clinton, Abe Lincoln, Dwight Eisenhower are a few on the list. In my 20+ year career, I can name three individuals that helped shape me into the professional I am today by challenging, guiding, driving my thinking and execution to beyond what I ever thought I could accomplish on my own.

So this, then, is my own definition of inspirational leadership: Finding the best people, and putting them “in the arena”.  This statement by Theodore Roosevelt wraps it together nicely:

“It is not the critic who counts; nor the man who points out how the strong man stumbles, or where the doer of deeds could have done them better.  The credit belongs to the man who is actually in the arena, whose face is marred by dust and sweat and blood; who strives valiantly; who errs, who comes short again and again …… and at the worst, if he fails, at least fails while daring greatly, so that his place shall never be with those cold and timid souls who neither know victory nor defeat.” 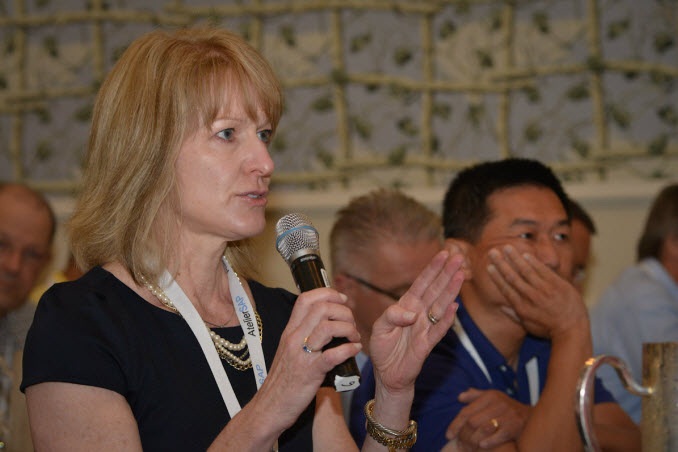 Pushing people into the arena involves letting their absolute strongest aptitudes have an opportunity to shine, and setting goals into somewhat uncomfortable zones that leverage those aptitudes. I think about what my team (and myself) could do if we felt the freedom to fail/freedom to thrive.

Inspirational leaders are the people you want to be around to feel their energy, their passion, their devotion. To see their results and the next area they tackle. More often than not, they make conversations less about themselves and more about others. They live in the arena.

This blog was originally posted at http://sapcareersamericas.blogspot.com/2013/06/Carol-Mackenzie-SAP-A-Lesson-in-Inspirational-Leadership.html and is reprinted here with permission.

Carol, thanks so much for sharing this wonderfully inspiring story!

Since my first reading of Roosevelt's "The Man In the Arena," I've been moved by it.  Not many realize this was part of a speech he delivered at the Sorbonne in Paris on April 23, 1910.  I think today, he would have paid homage to "The PERSON in the Arena."  Here's a link to the full speech: http://www.theodore-roosevelt.com/images/research/speeches/maninthearena.pdf

What really caught my eye is what you gleaned from Luisa: "...where emotional intelligence is more important than intellectual intelligence."

Almost twenty years ago I was given a copy of Goleman's book by my parents - it totally resonated with them, and I found it fascinating too. EQ is perhaps more important than IQ they said (although they still wanted me to get good grades... 🙂 )

I think today, emotional intelligence is even more cirtical in helping us bridge the generational and cultural gaps of our global society.

Thanks Gerry... agree, EQ is even more important now. That struck me too as spot-on.

it is time to re-read those EQ books and shake ourselves up a bit...again.  It's enlightening that you can read something at one point in your career, pick it up years later, and glean entirely different insights.

Carol, what an amazing experience! I am inspired by your concept of "freedom to fail/freedom to thrive", the innovation and game changing results we aspire to every day as technology leaders are really found within this statement. Letting people fly and really soar to completely new levels also means trusting them, and inspirational leaders are able to do that and teach others to do the same. Great piece, thanks so much for sharing this!