According to the Phrase Finder back in the 1930s many American “dust bowl” farmers left the drought stricken mid-west for California with the phrase “California or bust!” emblazoned on their trucks. The drought and the Great Depression were a one-two punch that bankrupted farmers. Most had to use their last few dollars to trek west to start a new life.

While I think it wrong to compare the current long PowerBuilder update ‘dry stretch’ to the dust bowl and developer morosity to the great depression, there might be some who are tempted to draw parallels.

Rather than resting on my laurels, last month I dove headlong in SAP’s HANA maelstrom, voraciously reading and watching content on the HANA Academy, setting up my own HANA Cloud server and using PowerBuilder as my client tool to drive my learning.  It’s my gut feeling that PowerBuilder’s ‘golden ticket’ to renewed vitality will be when SAP recognizes it as the HANA tool of choice for rich client RAD.  My bumper sticker should proclaim “HANA or Bust!‘

I’ve formulated my “maiden voyage” into a ‘follow-me’ tutorial that started to appear today on SCN.  Here’s the first installment; I included source code and a SQL AnyWhere database together with ToDo instructions, so you can mimic my accomplishments.

Organizations everywhere currently driven by PowerBuilder can benefit from HANA. Just this morning I had a conversation with Sr PB architect/developer at a Health Insurance provider.  He told me about some actuarial number crunching processes that take 5-6 hrs to run. Now that I demonstrated the PowerBuilder / HANA combo he will be asking his management to fund a POC app to demonstrate how using HANA might take that runtime down to less than 5 minutes!

I look forward to reading the tutorial.

Awesome work Yakov!!!  No doubt things are going to bust wide open with PowerBuilder again.  Just need to finish working through this transition.  🙂

Great stuff, Yakov. I am interested to hear if that PB customer will be pursuing HANA further. Off to go do your demo!

Great, Yakov! a POC is what PB on HANA really eager to have.

Unfortunately the cost model for Hana is prohibitive and so only a handful of large clients can afford the luxury. I'm also looking at IQ which when bundled with the Crystal support suite is very cost effective and gives performant reporting.

Having said that I'm very keen to utilise PB & Hana, just need to find the customer with deep enough pockets 😉

SAP has to recognizes that
PowerBuilder is "the HANA tool of choice for rich client RAD".

If you have a POC and/or a good seminar we will present it at the next PBUG meeting in Walldorf!

Anything new about PB and HANA?

PB 12.6 doesn't offer any special abilities for HANA integration.  So nothing new to report at this time

The first EBF of PB12.6 was available publicly 2 weeks ago, it fixed a dozen bugs on connecting HANA with ODBC/JDBC drivers.

From the bug list provided with the EBF there were only 3 bugs fixed.  So you are saying that there were really many more and this EBF may be worth down loading?

Following is a list of fixes which are cumulative to this release.  Each

description of the problem. The list is sorted by the EBFID column.

access a DW column by dot notation using the

DWObject variable and the column is removed

from the DW object

functions return a wrong result on a dynamic

computed field whose expression is the sum of

a column in the DataWindow

PowerBuilder missing the constructor at the

The bug list only includes customer CRs reported through SAP/Sybase support channel, other CRs are not listed.

Thanks.  is there a way to get a list of all the CRs fixed?  We are in the process of testing our 12.6 app for deployment to customers and it would be nice to know if we should apply the EBF before hand.

We don't have that list, maybe it's not common to post CRs found during QA internal tests!?

Usually customers only patch a EBF that fix CRs they reported or ran into. If your app runs well with PB12.6 GA, why do you apply the patch?

I'm sure there are many 'little' changes in the product that few know about.  Here's one example I discovered by accident in 12.6.  Someone finally included the code to echo ORCAScript commandline options.  Look it even lists New for 11.1! If only there was complete list! 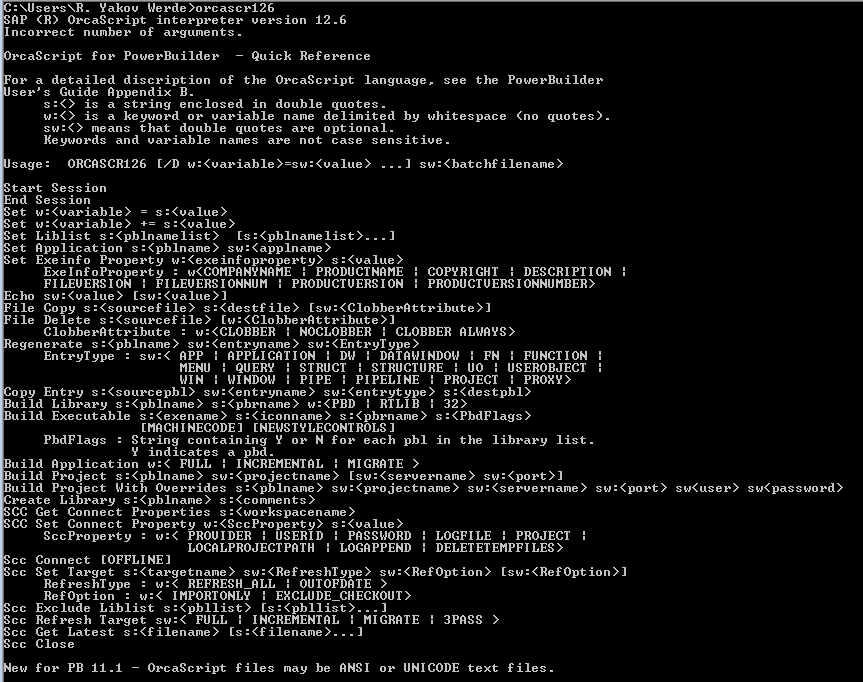