A Tale Of Two Gamification Platforms

Like it or not, SCN is a gamification platform. Last month, I shared my experience with how SAP rolled out their platform [ Ten Days on the Gamification Road ]. Others have described their experiences in this space [ I am beginning to like it and Help, I am being Gamified! ]. And Laure Cetin posted externally about the traffic/content changes in The SAP Community Network: How to Use Gamification to Increase Engagement (though I would normally quibble about vague, unbounded statistics like “increased activity by 400%”). Today, I’m going to compare the SCN games to another large software vendor’s.

People sometimes describe me as an “SAP Basis” person, or an “SAP Architect”, but I’m only in (or near) SAP systems part time in my day job. I work with an enterprise scheduler (sometimes known as workload automation), which spans many (many many) non-SAP systems, as well as databases and applications from many other vendors.  For over a decade, I have been contributing to an online forum dedicated to the product AutoSys; the forum moved from a Perl-based freeware manager to a Google group a couple years ago. That is a community-based forum, similar to what Susan Keohan deified as the “Workflow User Group” [see: What is the WUG and how do I get involved?]. But the AutoSys vendor also maintains a community network for their product line. I have found the community mailing list and the enterprise software supported forums a bit redundant, and with the former giving adequate answers to most questions, not much motivation to visit the latter. After a recent users group meeting where I realized I had missed key announcements and maybe some content, I decided I’d give the vendor’s platform another shot. When I discovered they had also rolled out gamification, I thought comparisons to SCN would be interesting.

The last time I visited the other site — “CA Workload Automation (Distributed) Global User Community”, which I’ll just call WA here — was in 2008. Compared to the traffic on many SCN spaces, the WA site is very quiet. CA has many product lines, as does SAP, so I’ll assume some areas have higher visitations.  I don’t recall adding an image of myself from my visit to India in 2011, but there it is. 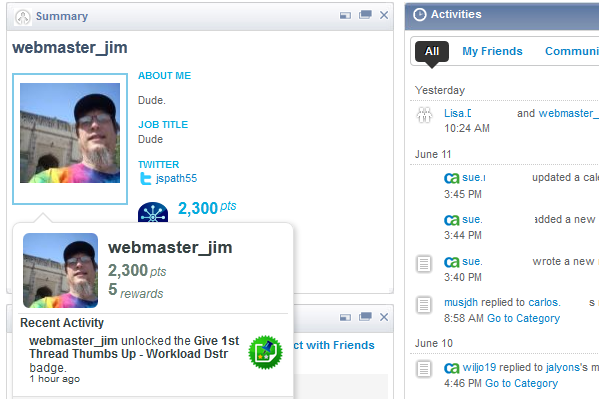 Perhaps they picked up the image from Twitter?  Anyway, it’s a nice shot, if I say so myself.  I must have edited my personal information, as this is short, but not from Twitter. With this first login, I gained rewards, points, a badge, or something; it’s a bit hard to discern. ASUG and SCN both have Jive, so I can tell this platform is not Jive.  SCN went with an add-on for gamification from Bunchball, and this isn’t that. With a little digging, I found WA is from Liferay. The bio page (called “Summary” here) is simpler than the SCN equivalent, which means faster loading but less search capability. Looking at another user on the site, I got the good old “Java wheel of fortune”, indicating a data retrieval latency, and not too much information about this person.  Whether they’ve chosen not to reveal much, or there aren’t fields to be exposed, I’d give the edge to SCN here, with it’s relatively quick pop-ups. However, both platforms reveal essentially the same level of information about a user, showing general experience level and some specific achievements (“badges”). 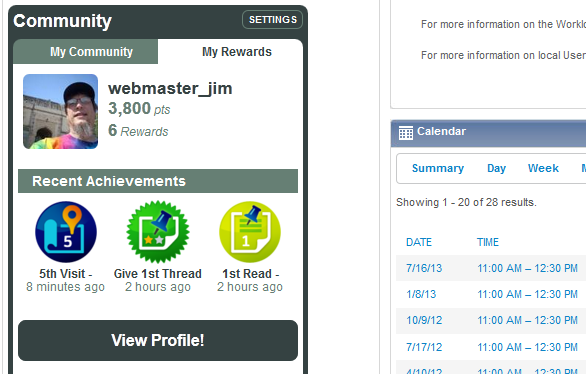 After an hour or so navigating the site, peeking and poking, I earned a few badges, increasing my points, rewards and badges with almost no conscious effort. Is this a good hook for someone to return for more?  It’s just as hard to tell on WA as it is on SCN.  Laure, Mark Yolton and others believe SCN traffic has increased along with quality. As an SCN Moderator patrolling the back alleys of the forums, I’m not convinced these inducements are driving quality up. 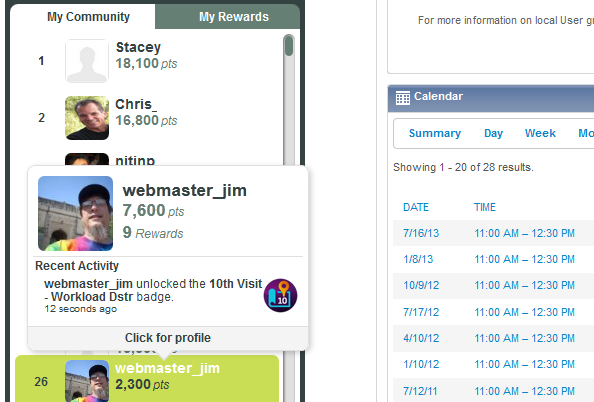 Like SCN’s “Leader Boards”, WA has comparisons amongst participants.  I seem to have landed in 26th place as shown here; I like the sliding imagery better than how SCN currently shows “top” contributors, though I expect this is a matter of taste, not absolute win/loss. SCN probably gets the edge on what the leadership means, as the WA display jumbles up total participation with group-specific rewards (thus I’m shown here with counts of 7,600 and 2,300 without helpful context or history links). 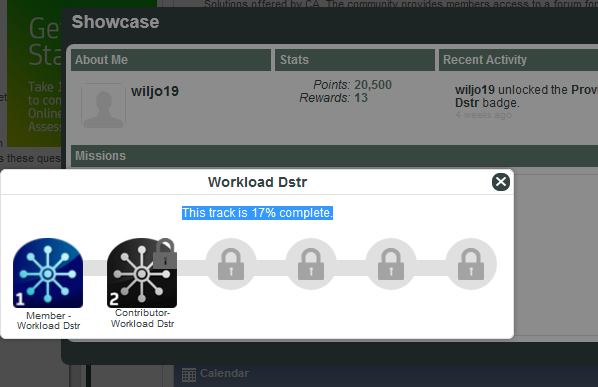 Just as SCN gamification has mission for various community contributions, so does WA, here shown as a “track”. The levels are apparent as numbers, and I’ve gained level Two, moving from “Member” to “Contributor”.  I looked around, but could not easily see what the next level would be, nor how to get there.  I’d had an easier time of this on SCN, but since I attended Moderator webcasts ahead of time, versus stumbling around the WA site alone, it’s unfair for me to compare how easily each works.  There is a link for “how to earn points” on WA; if SCN included this, we’d be buried in noise: 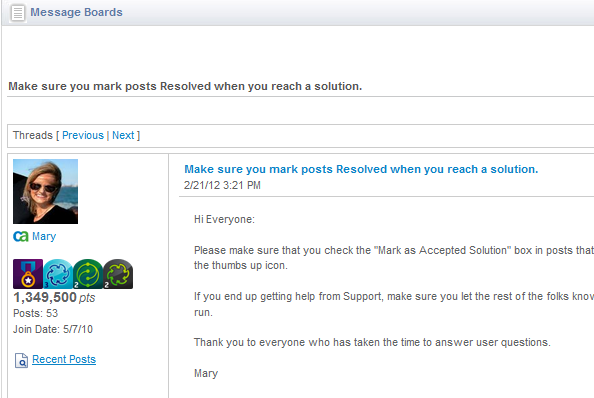 Like the classic “sticky notes” on SCN, there are power users and important notes on SCN.  Here’s one like the recent blog post from Jürgen L – How to close a discussion and why, titled “Make sure you mark posts Resolved when you reach a solution.”  As with SAP posters, the WA site shows who is a paid staffer versus who’s a volunteer. 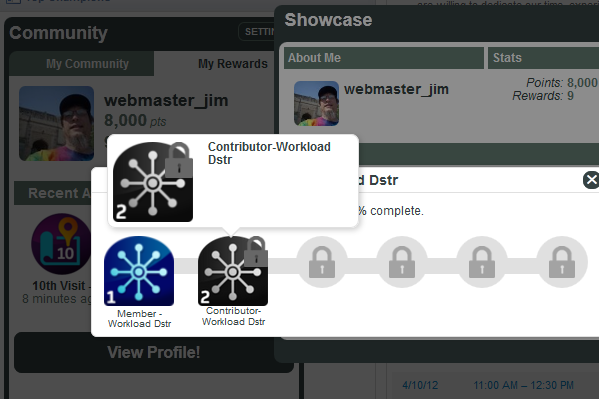 This is a close-up of the “details” on a WA mission step. Unfortunately, in my view, the decision to truncate text on these levels is detrimental to the user experience. What’s “Dstr” anyway? In some ways, SCN suffers from the same symptoms naming and managing their SCN spaces – products get renamed, divisions are acquired,  users are more familiar with what they call products than what the vendor does.

Jim, you never fail to amaze me, with the depth and breadth of your blogs.  I do have some of the same concerns you have - will gamification *really* drive up quality?  But the SCN moderation team (including you, and yours truly in a more minor role) do a great job.

Now if only we could address my biggest pet peeve today.  Unanswered discussion threads - or those where the answer is 'We solved it' - with no indication of what the solution was.

We've been ruminating on creating a mission aimed at OPs that would help address this. Will run the idea by some of the moderators once it's a little more defined. As always, the tricky part is to define it in a way that encourages proper answers and sharing of solutions but doesn't encourage cheating.

My related pet peeve is that of correct answers not being acknowledged.

Now if only we could address my biggest pet peeve today.  Unanswered discussion threads - or those where the answer is 'We solved it' - with no indication of what the solution was.

... and some users, fortunately few, don't give any points also if they have received a lot of helpful answers and sometimes at the end they marked as "correct answer" himself.

Excellent post! I am not active in any other vendor's user group or product site any more, although I used to be in a previous job, so the comparisons were very interesting to me. I reviewed Bunchball's value prop claims, and I can believe that their solutions can drive greater engagement and wider audiences, but I too am not so sure about gamification driving up quality. I do have to say that I am seeing fewer "notablogs" these days, but that may be a function of other changes at SCN. I have observed and greatly appreciate your personal efforts at nipping low value discussion threads in the bud. Thank you, thank you, thank you!