Note: This blog has been previously published on the Acorel Blog.

Warning: This blog post is going to be techy, but also fun. I will show how I realized an idea that has been in my head for quite some time: creating a multiplayer game in ABAP. Who wouldn’t want to play games with his/her colleagues while your boss thinks you’re very busy working in SAP? 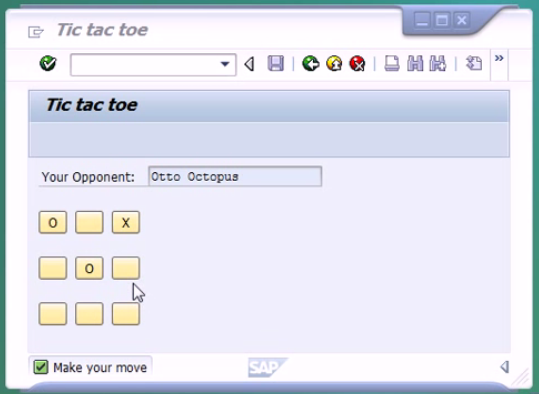 In this blog post we will create an ABAP version of good old Tic-tac-toe, where two users can compete for eternal fame.

To make it more interesting we’ll teach the old ABAP dog a new trick: Instead of using a clumsy refresh button, the opponent will automatically be notified when the other player has made a move using a technique called long-polling.

First of all, have a look at the end result:

Why create a game in ABAP?

Secondly, it is always good to see how far you can push the technology you’re using. The technique demonstrated here can also be applied to more serious applications, such as collaboration tasks or working with near-realtime information.

Even though the traditional SAP Gui isn’t the major SAP UI that is was, the mechanism shown applies to any UI technology and can also be applied in Web Dynpro, the Web UI, HTML5, etc.

Note: I won’t deal with the basics of a tic-tac-toe game, these are easy enough to figure out and if you’re interested, just ask in the comments or take a look at the supplied ABAP source code.

Normally, in SAP Gui (but also a lot of other UI technology) the client will trigger a refresh to see if there is new data. This is a called Pull mechanism and it is ok for most data-driven applications. Not for collaboration tasks and near realtime communication.

The following figure shows how a Pull mechnanism works: We have a SAP Netweaver ABAP server and two SAP Gui clients that both compete in the same game. As said, there is no real mechanism to push an event or data from the ABAP stack to a SAP Gui.

This means that the while the first player is making a move, the seconds player will have no way to know when it is his turn. Therefore, either a refresh button or a refresh at a fixed interval is needed for the game to progress.

Long-polling to the rescue

The left figure shows how a traditional pull system would work. The client (SAP Gui) would periodically initiate a  refresh of data from the server to find out wether the other player has made a move yet. This will lead to a lot of unneeded data transfer and also a poor user experience: The user will have to press the refresh button a lot or have to endure a lot screen flicker while the Gui is polling for updates.

The figure on the right shows long polling. In this situation, the client (SAP Gui) is still iniating data transfer, but rather than answering the query directly, the server is going to delay until the desired situation is true: the other player has made a move, it is now your turn.

Note that all the while, the connection stays open. The connection can stay open indefinetely or or just a while longer than the expected time needed for a single move.

To make it more concrete, these are the ABAP objects used to create the game: 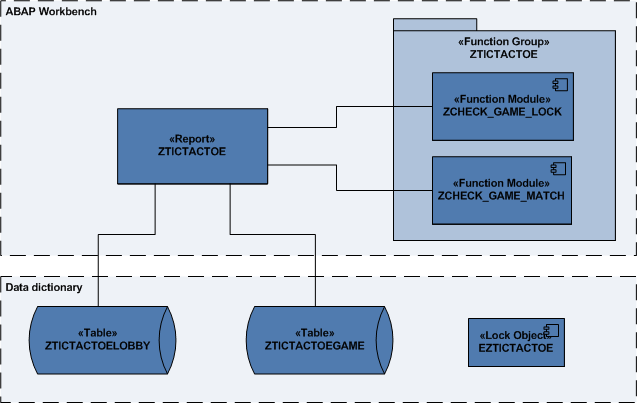 The UI for the user is in the ABAP program ZTICTACTOE, which consists of a few simple screens. Data is stored in two tables:

The lock object EZTICTACTOE is what controls the long polling. The player that has to make a move has acquired a SAP lock on the game (as identified by the ID of the ZTICTACTOEGAME table). While that player is making a move, the ZTICTACTOE session of the other player will try to acquire the lock every second until he succeeds. If this is the case, the screen will be refreshed and the other player can make a move.

Show me the code

No blog post is complete without some source code:

The Function Module ZCHECK_GAME_LOCK tries to acquire a lock on the game, and will perform a while loop until it is successfull or it will give up after 60 seconds (MAX_SECONDS):

The report will call Function Module Z_CHECK_GAME_MATCH in an asynchronous way:

When the Function Module is finished (either it is the players turn or 60 seconds have passed), the return_from_wait routine is executed:

This routine simply refreshes the screen. Two outomces are possible:

The complete source code can be downloaded here as a SAP Link nugget.

You’ll need the following plugins to import the nugget:

I can see my team's productivity going south!

A nice little piece of code that proves ABAP is fun and demonstrates very well the PERFORMING ....ON END OF TASK functionality.

thanks for brightening up my day

I remember during my non-SAP, that is Java-VB days, during interviews or sessions we were told to create applications that checks whether a word is a Palindrome or tic-tac-toe kind of games. But never in SAP anyone asked this, just because of its ERP baggage it carried.

Now with this blog, I see the reverse happening 🙂

While we are always accessing business tables, its good to have such bits of fun 🙂

Which is a missed opportunity in SAP trainings, because these type of game-exercises are great to teach all sorts of funky stuff.

I remember creating a "mastermind" game, a chat client and a "garfield-reader" (which ended up in production and is still in use)

I learned a great deal doing so, and I had a lot of fun.

A productively used Garfield reader? 😉 Cool! I agree with that you can learn a lot from creating games or just abusing technology for unintended usage. Do you know if there already is some place in SCN for this kind of ABAP abuse?

The funny thing is that the Garfield reader keeps user statistics in a table somewhere (pre-prism).

An ex-colleague of mine happens to be at that specific client now and he's checked that table for me. It shows quite a hefty number of records. Which is weird for an application that no-one is supposed to be aware about, and which was supposed to die a quiet death in the sandbox system.

I assume that the ABAP space makes a good fit for ABAP Abuse, but maybe we have to introduce the abapabuse tag.