Social on Snowden: Spy or Hero?

On June 6, 2013, The Guardian published its first story on Edward Snowden and his leaking of National Security Agency (NSA) information. Snowden revealed top secret US surveillance programs before fleeing to Hong Kong. This past week has been filled with news stories both supporting and denouncing Snowden. Some hold him in high regard as a whistleblower simply defending the US Constitution and the privacy of Americans. Others believe him to be in cahoots with the Chinese Government and cite significant damage to national security. Snowden sought to share his story via alternative bloggers and social media, displaying distrust of traditional media outlets, and he was certainly successful. So what does the social web think of this man? Is he a Spy or Hero? 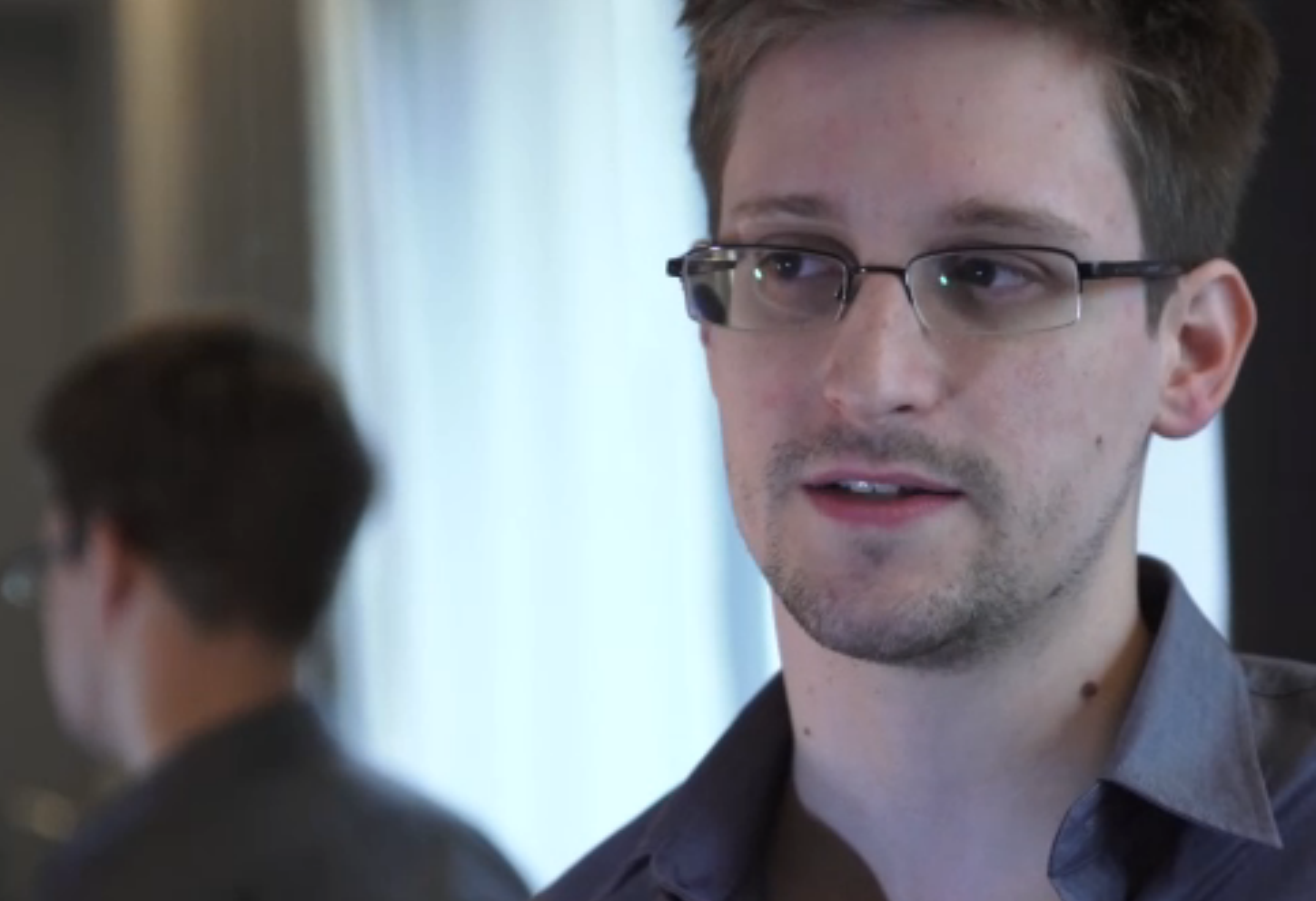 Facebook, Twitter and the entire web has been ablaze with opinions and debates this past week. From outrage to applause, there is plenty of sentiment out there around Snowden. With SAP Social Media Analytics by NetBase, we can take a unique look around this past week’s events and see first-hand the social web’s opinion of it all. Let’s look at the conversation. Click on the graphics to enlarge view.

Here we are looking at a summary of the social activity as well as an hourly timeline of the positive and negative sentiment through the week. A net sentiment score of 9% is positive, but reflects an overall reluctance to place Snowden in a positive light. For most brands or topics, a net sentiment score of 30% is regarded as average. In the timeline it is evident that opinions changed as the week carried on. Snowden sentiment was very positive on June 10th, however as days passed, sentiment started to trend negatively. Could this be because of media influence? Or perhaps people realizing the damage Snowden has done?

Looking at top terms, there is a lot of talk around Hong Kong, where Snowden is currently hunkered down in a hotel. When it comes to positive and negative attributes, there is talk about his work as a contractor for the NSA. This is held in positive regard but he is also labeled as a traitor. Each of these words can be drilled into for deeper social analysis in order to see what people are saying.

SAP Social Media Analytics by NetBase utilizes a Natural Language Processing (NLP) engine which can pull emotions and behaviors and much more out of sentiment. People are thanking Snowden and saying that his whistleblowing is great. Others are accusing him of being a spy and call for him to be brought to justice.

Brands associated with Snowden include the CIA and Booz Allen Hamilton, the technology consulting firm he was working for when he was exposed to the surveilance programs. Naturally, many hashtags were generated to track the conversation online. This is a powerful insight allowing brands to monitor the success of strategic marketing hashtags as well as user hashtags that may be created in response to events or experiences.

The conversation is taking place predominantly on blogs and social media networks as Snowden had wanted. There is a lot to be said about blogs and social media overshadowing news sources. The most influential authors are the New York Times followed by The Guardian. Cory Doctorow, a well-known Canadian-British blogger and journalist, makes a splash in the top authors as well. 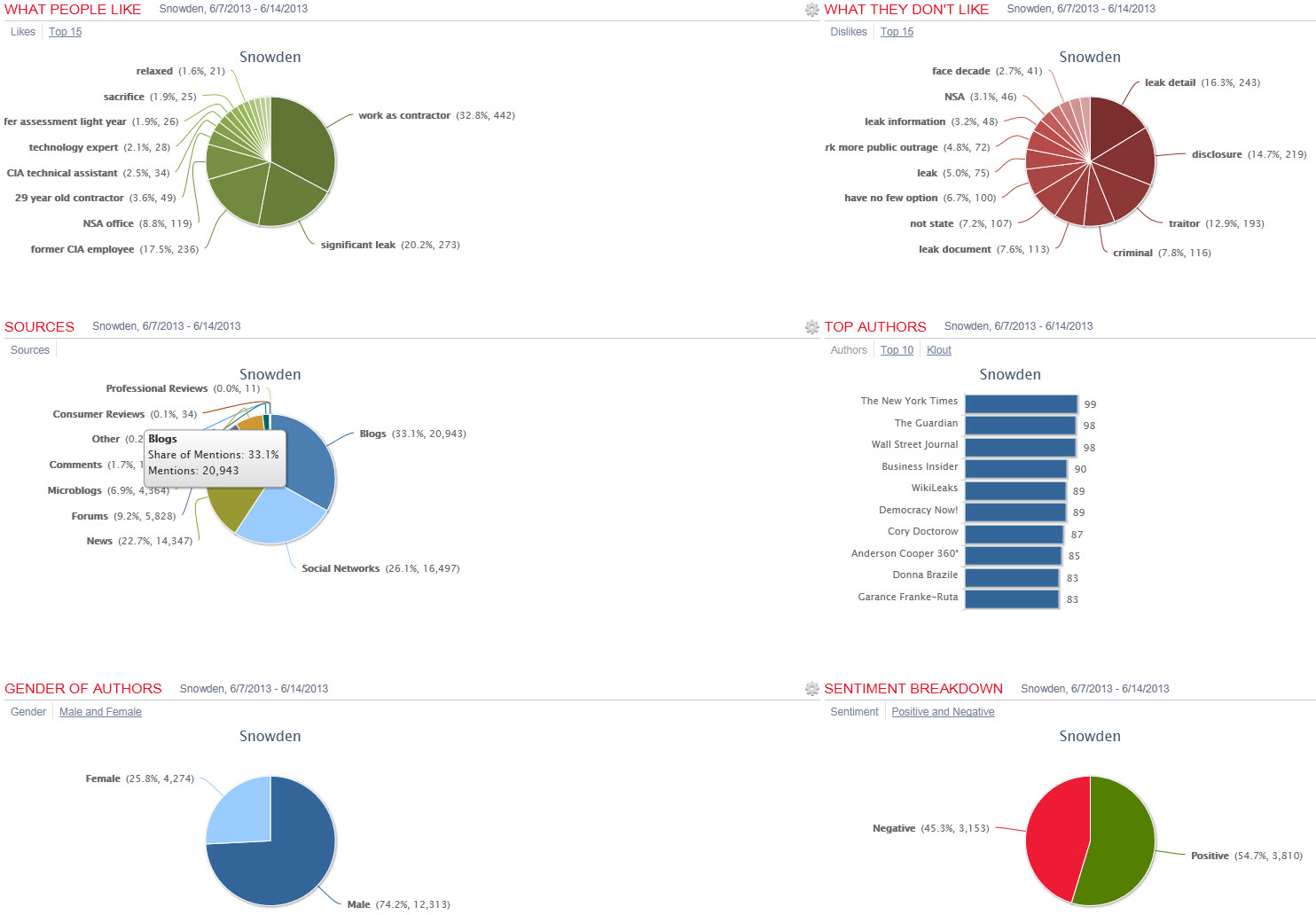 When we drill down into the stream of sentiment, we can see the actual posts and the URL which can be accessed directly. Depending on the source, the posts can be broken down by gender, location, positive vs. negative, klout score and amplification. This man loves Snowden and thanks him for what he has done.

This other post highlights the fact that Snowden’s leak is treason and that Snowden has reason to live in fear.

Snowden’s actions have major implications regardless of the various opinions out there. If people weren’t talking about government surveillance before, the conversation has certainly received a jumpstart. Snowden’s story will most likely hit the silver screen before you know it…

excellent Analysis of a time critical situation ... thank you very much Jacob for putting SAP Social Analytics (NetBase) through its paces to provide insight into the world that Edward Snowden has and will have a profound affect on

Wow.  This certainly is a powerfully timely and illustrative use of SAP Social Analytics.  Thanks for this content and the clever way you compare this to brand.

Thanks Marilyn! Very powerful tool considering one upset customer can derail a brand.

This is an interesting use case.  However, the result could be scary.  What could we achieve here?  Make a judgement about a person based on public opinion, while the public has no knowledge about what exactly was going on?  Then, use the media to influence the public?

I think I still prefer other use cases such as new product roll-out.

please note that the blog is not making a value judgement on the person, but is reflecfting what the social media sentiment is. People are making judgements about people / products / companies all the time, sometimes based upon very little information.

By providing an analyis like this we are starting a much bigger dialogue by making people AWARE what is being said in the furthest outreaches of the social media society.

Then one can start to address the problem(s).

Snowden wanted the visibility of Social Media. It is what is necessary to make his statements/position clear to the world.

Knowing in which direction sentiment is moving can help him craft an even better response to the world he is in. The fact that tools like these are being used by the people he is bringing a social media spotlight on ... is very clear now (if there were ever any doubt).

Forewarned is forearmed ... and that counts in private as well as the business world as the boundaries are increasingly growing fuzzier.

I like this sort of analysis and am pleased to see it placed in the public domain.

It would interesting to do something like this once a week / once a month based on suggestions from the community.  The results could be posted and discussed.

My assumption is that such a public display of the power of the tool would be quite useful.

Thanks Richard - Jacob did a sterling job!

keep those suggestion flowing .. always remembering that we can only analyse and comment on topics that are in the public domain and of a general interest.  For any other we can always talk about the licensing of SAP Social Media Analytics, powered by NetBase 😉

keep those suggestion flowing .. always remembering that we can only analyse and comment on topics that are in the public domain and of a general interest.  For any other we can always talk about the licensing of SAP Social Media Analytics, powered by NetBase 😉

I agree that only such "safe" topics could be analyzed -you would have to be selective but I think it would be very interesting / useful to show people how to understand such sentiment analysis.

could not agree more ...   so what should the next one be?

Let me build up some buzz and get some suggestions.

Richard, I'm always open to suggestions and love working with this solution!

Jacob, I know you've asked for suggestions of topics in the past. With SAP Mentor Dick Hirsch helping to spread the word, I have a feeling you'll have plenty of choice topics to apply SAP Social Media Analytics by Netbase.

Another beautifully crafted blog with excellent graphics and analysis!

Thanks Jason! Looking forward to writing many more Social Media Analytics Blogs. Great to have Dick and others interested in new topics!

this is brilliant blog with superb statics 🙂

Thanks Jitendra! Glad you enjoyed the read!

Nice viewpoint and a good use of our software to determine sentiment around a volatile subject.

Thanks Paul! Definitely a hot topic and it is evident that people are still on the fence as to their support of what Snowden has done.

I think you are always going to see both sides of it.  Probably fall along political lines.

Wow..this really gives us some understanding on power of social and mobile analytics. Having said that it is absolutely essential to understand the issues surrounding Edward Snowden w.r.t. Security, Privacy and Government surveillance and our constitutional rights.

If Jacob could do some further analysis based on the above inputs maybe there will be some more insights as to how the trends are.

Needless to say, the opinion of people are all formed by what we hear from the media and what they want us to hear. In today's global world my personal view is that our privacy is diminishing due to mobile, social and related technologies and we are willingly giving it up without realizing. The government is responsible to provide for our security in general and the question is if they have to go through available technology to help in achieving it, is it the right way?... debatable!! and all of us will have viewpoints.

However, there shouldn't be many choices on what Snowden has done, trying to denegrate his own country in a foreign land to get a public opinion on our own government??

Great article! Still relatively new to SAP I keep discovering more and more tools and services that this company has to offer. At the same time I keep smiling to myself at the names they choose for such tools like "SAP Social Media Analytics by NetBase" or "Web Channel Experience Management". Come on, don't be afraid to let go of your Germanness and come up with some sexy names! 😆 SAP HANA maybe is a start.

Just my two cents, I hope nobody is offended here (I am a German native speaker myself).

Glad you enjoyed the analysis and welcome to SAP! I tend to agree with you on the names of some solutions. I do think that SAP is getting better at it and making things more simple, creative, descriptive and "sexier". I wish my German was better... I may have the German name, but the language skills aren't where they used to be...