Simplify everywhere: simplify your life, simplify the business and, of course, simplify your charts – that’s what we do with our graphomate addon for SAP BusinessObjects Dashboards (Xcelsius)!

In an advertising campaign for the LEGO Group, the renowned German advertising agency Jung von Matt simplified the appearance of comic heroes to their essentials. I reconstructed some of them with Xcelsius. So, let us see if you can recognize them …

The advertising campaign by Jung von Matt is as brilliant as it is simple: Well-known comic heroes reconstructed with the simplest  Lego bricks.

And it works: with only few colored bricks a whole comic world emerges before the mind’s eye. It does not always work at the first sight – but after a little thinking you will recognize them: This advertising campaign will help to further engrain the brand LEGO in the collective memory of the public. I was inspired – so much indeed, that I spent a night building some comic heroes in Xcelsius – using about 80 standardized column charts: 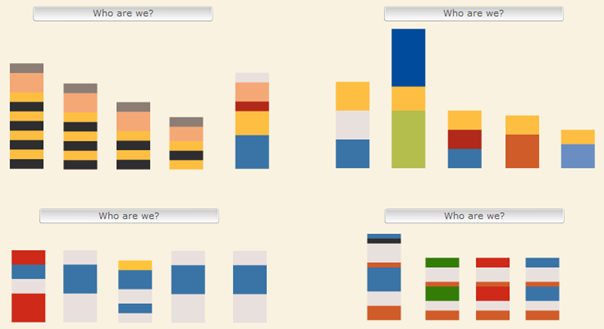 You find an interactive version here. Use the “Who are we” button above the “charts” to reveal their identity. Quite nice, isn’t it?

Take a look at the original LEGO heroes made by Jung von Matt (german) – which are really beautiful: A second important rule in Rolf Hichert‘s SUCCESS-concept besides Simplify which we fully implemented in our graphomate charts is called Unify.

The creative minds at Jung von Matt impressively followed this rule: look at the prison uniforms of the Dalton brothers or the beaks of Donald, Tick, Trick and Track! Without the black and yellow stripes I wouldn’t have recognized the Dalton brothers.