This week SAP announced that it will become the main and kit sponsor of the Bundesliga team TSG 1899 Hoffenheim in an initial three year deal. This is an excellent move by SAP for multiple reasons: it allows the company to expand its sports influence while staying true to its German roots, it gives SAP the opportunity to bring its fan experience software technology to a new market, and it gets the company more involved in what is quickly becoming the biggest and fastest growing sport in the world, football (or as we call it here in the U.S., soccer.) 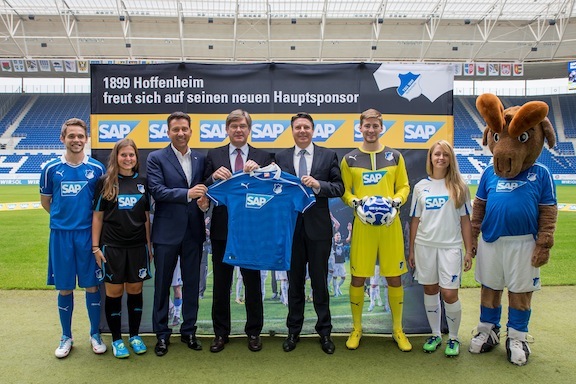 First and foremost, as a German company, SAP has had connections to Hoffenheim for years. One of SAP’s original founders, Dietmar Hopp, played for the football club in his youth, and in 2000 he returned as a financial backer for his beloved team. In just eight years, Hopp’s investment – and the club’s use of SAP software for financial accounting, merchandising and player database management – helped take Hoffenheim from the depths of Germany’s fifth football division to the Bundesliga league in 2008. The Bundesliga is easily one of the most respected leagues in the world, as two of its top teams competed in the final match of the UEFA Champions League tournament last month.

Secondly, SAP and Hoffenheim also announced that they will be using SAP software to enhance Hoffenheim’s fans’ gameday experience by developing a mobile app to “allow the fans to feel even closer to TSG.” Players will also be able to “improve their performance by assessing training using SAP HANA technology,” said SAP regional president Michael Kleinemeier. This will all be implemented via SAP’s collaboration with Fraunhofer IIS to analyze player performance through sensors during training. Similar software has been developed by SAP to enhance fan experience and player performance for the MLB’s Yankees, the NFL’s 49ers, and the entire NBA.

Thirdly, if SAP sees a successful expansion into sponsorship and software development for Hoffenheim, then there could be huge potential for business growth as soccer continues to grow and expand around the world. Soccer is already the world’s most popular sport, and the Bundesliga is in the international spotlight because of its teams competing in last month’s UEFA Champion’s League final. This is a great forum to showcase what SAP can do for other soccer teams in Europe, South America, Asia, Africa and the ever-expanding soccer market in the U.S.

It’s a wise – and yet still local – move on SAP’s part; a move that can only grow exponentially from here. To paraphrase an evil movie villain, though certainly said with much less ‘evil’, SAP’s involvement in soccer can be summed up in one sentence: “Today Hoffenheim, tomorrow… The World (Cup)!”

What Businesses Can Learn From the NBA Finals