Game 2 was not at all a game of two halves. Many of the story lines from the first half of the game stayed true throughout. The Heat had a balanced scoring attack, the Spurs relied on three point shooting, and the Spurs ended the game with 17 turnovers (three more than the season average.) 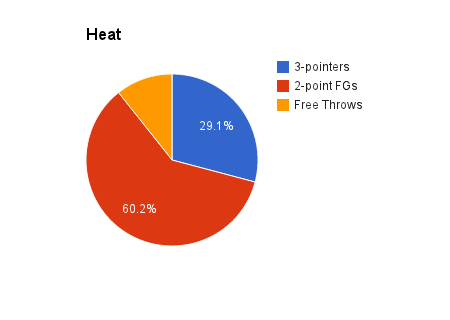 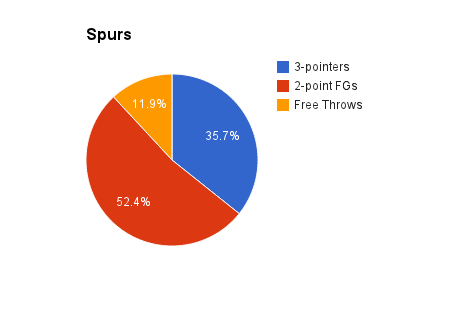 The three point slice was much larger for the Spurs, but for the most part the scoring was similar between the two teams. The Spurs and Heat scored about the same from three and the free throw line, but the Heat did a better job around the basket.

One of those aggressive players around the basket was Mario Chalmers, who had a great night by his standards, leading the team in points and setting up the offense very well. Here is a table of his night versus his season and playoff averages:

As for the odd scoring and stat lines, there was this very telling tweet from ESPN Columnist Bill Simmons

Whereas in Game 1 the Heat slunk away and allowed the Spurs to take over the fourth quarter, Game 2 was quite dissimilar. The game became such a blowout, with around 7:30 left on the clock, down by over 20 points Gregg Popovich, head coach of the Spurs, opted to take out his entire starting lineup. Three minutes later all the Heat reserves were on the bench and the last four plus minutes of the game were academic.

Here was the score by quarter for the game:

As you can see, the fourth quarter was not close. The final score, the most important statistic was 103 Heat – 84 Spurs.

Thanks and stay tuned for Game 3 coverage on Tuesday at 9 p.m.