The conference started for me with a 3 hour session where Ingo had a number of subjects he discussed with us.

He gave us an overview of Business objects 4.0 SP05, told us what is new in the 4.1 version that is coming out of rampup probably in 2 months. (he also explained that that is not a fixed time as the release is dependent on kpi’s such as number of installed instances at clients)

He continued with the best practices of BI 4.0 SP05 in combination with SAP Netweaver and the last part was about Big data, in-memory and BO Business intelligence.

This blog will only tell about the first part, the overview of BI 4.0 SP05 and the new features in 4.1.

In the overview part we looked the the full spectrum of BI. This spectrum is divided in three parts. Discovery and Analysis where the user is using self-service tools and it is all about discovering new things and communicating them in the organization.  The Dashboards and apps where this can be a single table+graph on a website to a complicated multi step planning tool and finally reporting where the user receives information on a fixed layout. In SP05 there are a number of enhancements on the platform. Now you are able to build a universe on top of BW queries. Also there is support for HANA models. Automatically when installing the platform mobile is also installed. Mobile is not a design tool but a deployment service for existing reports. When you want to present a report on mobile you just have to assign the report to the Mobile category and the mobile app will pick it up and it is visible on your ipad.

Going to the different tools we first had a look at the Discovery and Analysis tools. The tools were Lumira (previously known as visual intelligence), Analysis (for OLAP and for Office), Explorer and Predictive analysis.

With looking at the Lumira software Ingo asked us how we would tell a 5 year old what the difference between Explorer and Lumira is. Basically the big difference is that Lumira is a thick client application that you install on your own computer. This opens the way for some heavier data lifting in the dataset and visualization as you can use the resources of your computer to work on the custom data set you are working on. A big difference between Lumira and other visualization tools was mentioned as Lumira fits into the suite enabling all kinds of interaction with the other tools.

For the Analysis for OLAP and Office we first looked at the office tool. In a demo we saw how easy it actually is to work with the data. By clicking 2 columns and a menu item add calculation 2 key figures where added. 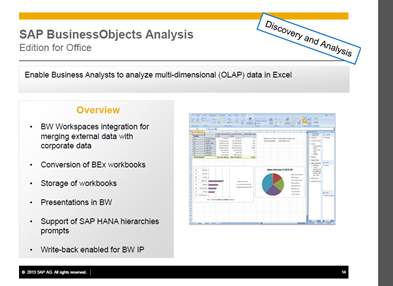 The GUI is much more intuitive than BEx. An user that knows how to work a pivot table in Excel will have no trouble adjusting to this tool. Analysis for Office can be seen as the replacement for BEx with the added bonus that you can give this tool to an user and can be assured that the user will be able to put the tool to good use without heavy support.

Other points where the conditions and exceptions. Conditions are “Filter by Measure” in this tool as this term is widely used in the BI world for this feature. Conditions functionality is expanded. You can for example make an condition for the sales of products A, B and C but without Channel X.

You can switch to Powerpoint with the results. In powerpoint you still have a limited number of navigation options, but Powerpoint is meant as a presentation tool so it is very limited.

In the web version a nice feature is Focus Analysis you can add a table and a graph in the screen. When you click the table the selected cell will act as a filter on the graph and the graph will show the filtered data.

With the new version you now are able to export the analysis via Design Studio. Then you have a standard app based on what you made.

A question was asked if there was an API for analysis for web as there is for the office counterpart. The answer was that everything you want to make you can do this in Design Studio.

Analysis for office is the successor of bEX. The end of life of bEX is however at least 2020. SAP has a policy of 7+2 years of support after shipment. As bEx shipped with 7.3 that means EOL is at least 2020. bEX is however in maintenance mode meaning that no new functionality will be added. Query designer is a different story. In the BW 7.40 version a new Query designer will be shipped based on eclipse.

Also a feature in BW from 7.3 is workspaces. This allows users to upload spreadsheet data into BW in separate spaces and query that data via composite providers.

Predictive analysis was briefly mentioned. This is a tool that is only useful for a very BI mature customer. That customer would need data analysts that know a lot about statistics and math. An example was given where a customer would look at the parking tickets to estimate how they best could avoid them.

In the statement of direction Design studio is the successor of the Web Application Designer and the Successor of SAP Dashboard. From 2015 Design Studio should be the leading Dashboard tool.

In terms of connectivity there are no  investments in new functionality for Web Application Designer and SAP Dashboard.

Now in version 1.1 that went live a week ago there is also iPhone support. You also are able to build template apps that can be used when you make a new application. Universe support is expected in mid 2014 the earliest.

In a demo we looked how Ingo built in 5 minutes an app where you could select a value in a crosstab and the application would switch to a graph on a dataset where the filter was applied based on the selection.

In 1.1 you can work on netweaver as well as BI Platform. However if you want to use mobile you need the BI platform. As Design Studio is HTML5 you can 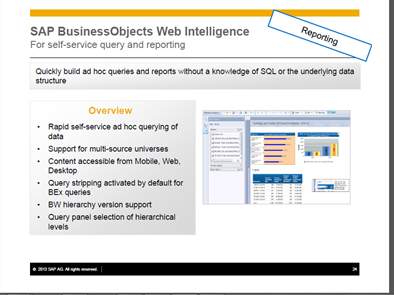 The first remark was that Webi is not a replacement for BEx. Webi is a reporting client. Functionalities for analysis are missing and handling hierarchies or suppressing zeros is not in the tool

Crystal is a tool to make highly formatted reports. Ingo told he often saw very formatted reports  made in excel that took the customer many hours of development. With Crystal Reports it would be doable within 10 minutes as it is designed to make those reports. In Mobile added functionality will be available where you will be able to drill down in the crystal report on mobile.

A lot of new features will be available. We went through a lot, I will go trough a few points . A complete list can be found at

In the platform a number of enhancements have been made with regard to the infrastructure and the Launchpad. 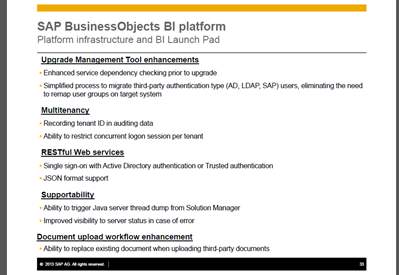 In Crystal Reports there is a freehand SQL editor available. This freehand editor can be used to optimize queries to relational data sources.

In Webi there (finally) is the possibility to freeze the header when scrolling through a crosstab. You can set a number of rows to freeze. There is now also an option to use custom palettes to manage chart coloring. Finally there is an auto refresh option at document and server level for measure delegation.

In the CMC you can now configure parts of the GUI to stay invisible for users. This way the user will not see the buttons he is not allowed to use instead of pressing them and getting told so. Further there are a lot more possibilities to consume or schedule the document. 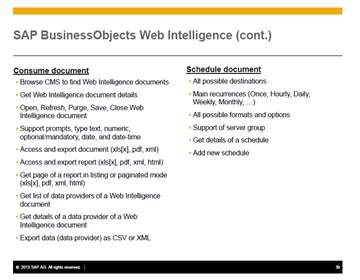 The Business Analysis for OLAP has a better integration with SAP BW. If you have several queries with the same variable now you only have to type the value once instead for each instance. 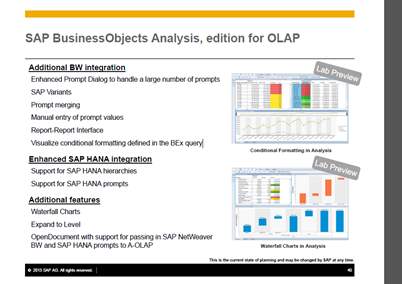 After all this information this was only the first of three parts. What followed were the best practices for BI SP05 on netweaver and Big data.

For this blog i focused on the first part. I will try to write more blogs as i am attending a lot of talks the coming three days.

Good, detailed notes and it sounds like you obtained a lot of information from Ingo Hilgefort session.