It’s just two weeks of course that I have attended in openSAP and I am so overwhelmed with the way the content is delivered that I am compelled to write this blog. It is highly unlikely for anyone reading this blog and not knowing about openSAP, it was all over the media channels. Fortunately enough the submission dates for first week assignment was extended and that must have given laggards like me a second-chance! For a moment I will stop comparing the content delivery model of openSAP with any form of online courses that I might have attended and focus on some of the clearly visible excelling points.

The content is highly structured and crisp. The flow of lectures is very well linked and streamlined. When I tried downloading the weekly zipped contents, it prompted that it would take few hours for the content to get downloaded, it is certainly worth the time spent on downloading or may me more than that. The content is very well addressed to the target audience-developers. The speaker, Thomas Jung just uses the language of developers.There are no marketing or flowery words used anywhere. For me that is something very amazing as lately, I have been reading too much about HANA and those buzzwords just get in but not in openSAP. I can’t stop myself from comparing this to one of the TechEd sessions that I have attended last year on HANA in Bangalore. I am sure that majority of attendees were developers there as well. That was a demo session with ABAP on HANA and the word ‘non-disruptive’ jarred on my ears as it was being used many, many times. Considering that as a hands-on session my expectation was more to do and see that myself than just the word being repeated over and over again. I don’t know if anyone else noticed but when Thomas said the exact thing in his session [week1] about moving existing code to HANA, he said it very eloquently without using the word non-disruptive. It is not just about using the words but the style of delivery matters.To me, OpenSAP has certainly raised the bar of quality in which demo-driven lectures are supposed to be delivered.

The lectures are so well delivered that I was excited and completely focussed till the weekly course content was over. I am not trying to exaggerate but it’s like no one would like to miss the next part of The Lord of the Rings after watching the previous part. It happens very rarely that after taking the sessions, I am excited to evaluate myself with the questions, but openSAP certainly has the force to do that. It’s always exciting when the speaker uses the words like ‘We developers’ rather than ‘You developers’ or just ‘developers’! The content is so well focussed for a beginner to get started with HANA that I can’t stop talking about it. Thomas has really got into the mind of every developer and given the sessions by explaining each and every term he uses: as basic as ‘Schema’. Initially, when I was seeing one full video session dedicated on ‘AWS’, ‘Cloudshare’ etc., I wondered what that is for! But when I see the overall motive of the course which is to me, ‘Getting started with HANA’, that session is certainly required. When I did my first POC on HANA, I had to learn and imbibe many terms used in BW terminology, most commonly being fact tables and dimension tables. In openSAP the speaker has really done a great job in using the familiar terms.

The focussed approach of this course clearly speaks of the amount of planning done behind the scenes by the openSAP team. The site offers various other options like discussions, creating groups etc. Rich Heilman  and team is doing some exceptional work in handling the forum discussions there and also updating any issue being faced. There are already many generic groups created for anyone to be part of one or more groups. I was surprised when I found a group was already created with the name of my organization. That certainly provides me with some networking options with like-minded people in my own vicinity.

On a side note, had there been any option of peer evaluation in this course, I would have loved to poke my virtual classmate Jan Penninkhof to be my reviewer!

In case anyone is wondering how does the sessions look like, I would just share a screenshot from the course as below: 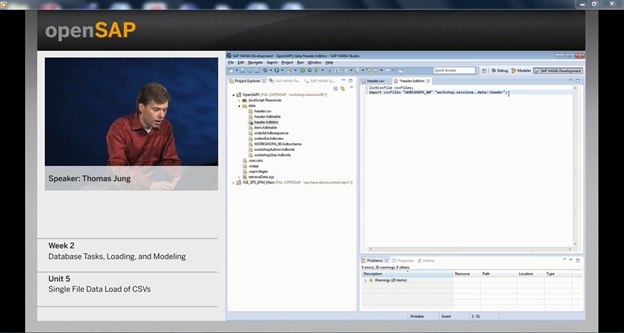 I feel very good that I did not procrastinate or postpone this online course for any other priority as so far this has been absolutely fantastic learning experience. Kudos to openSAP team!