Customer enhancement in EWM: Skipping a screen in RF transaction

http://scn.sap.com/community/extended-warehouse-management/blog/2013/06/09/switching-off-initial-screen-in-rf-putawayThis blog post explains a way to switch off screens not needed in EWM 7.0 (RF). The case in consideration is ‘Putaway’ process using RF devices. Customer did not want the initial screen that comes up during the Putaway process using standard EWM transaction.

Knowledge source: EWM RF Cookbook is a great source of information, however illustrates only the generic processes and does not dwell into specific situations and requirements.

EWM RF Configuration: Switching off a Screen cannot be accomplished using EWM RF configuration node activities alone. The steps/transactions sometime are decided by the corresponding RF Function Modules/programs (~akin to hard-coding). We may treat this as the limitation of EWM wizard currently.

Case: Switch off the following screen that comes up during the activity ‘Putaway by WO’ (3-1-1). Customer reason: HU is not being used for putaway. 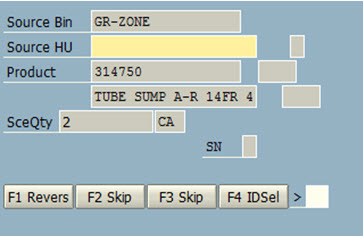 Initial attempt: We simply tried to remove the step from the logical transaction using EWM RF configuration nodes, assuming the screen will go-away. 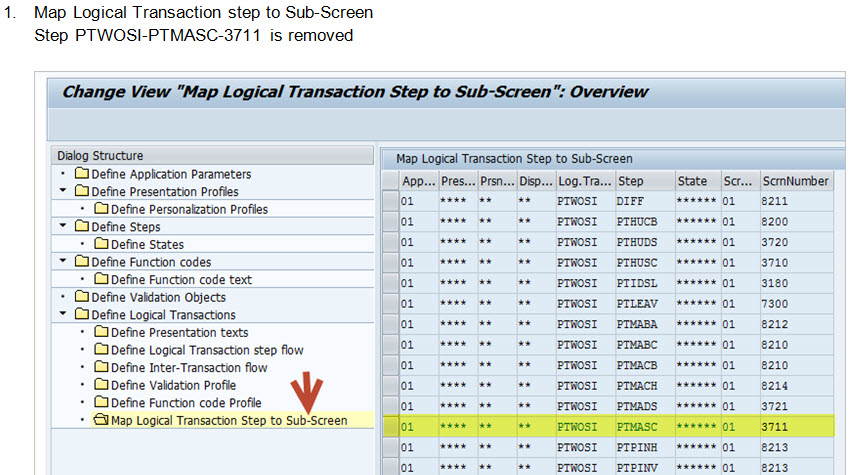 However, upon execution, we received error as shown below: (system was still expecting the step PTMASC) 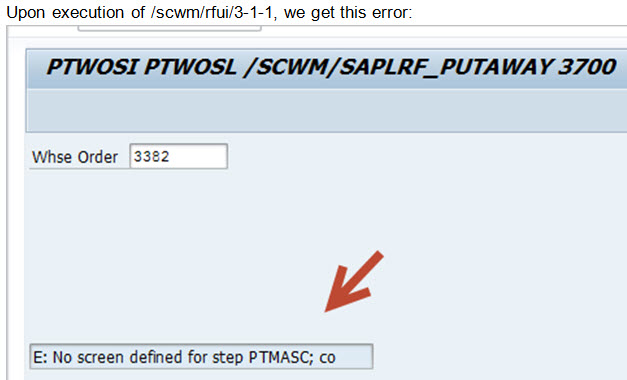 Upon investigation, we noticed that the transaction code is expected by the system irrespective of configuration for screen flow. This was further confirmed by useful reply from SAP for our customer message.

The Function Module  /SCWM/RF_PT_WO_NAVIGATION was responsible for calling the step. It was deemed that a minor enhancement is the only cost-effective choice to achieve the end result.

Relevant SAP Notes: Since the customer’s system was at EWM 7.0 SP6, it needed the SAP Notes to resolve issues with ITS Mobile templates, Presentation profiles and RF Logical Transactions. Following notes were choses and implemented:

An enhancement was created in the FM /SCWM/RF_PT_WO_NAVIGATION as shown below. It simply set the function code to GTPLMT to make system skip the step PTMASC.

now, upon execution and input of Warehouse Order number, system skipped the initial HU screen and presented the actual task screen as below: 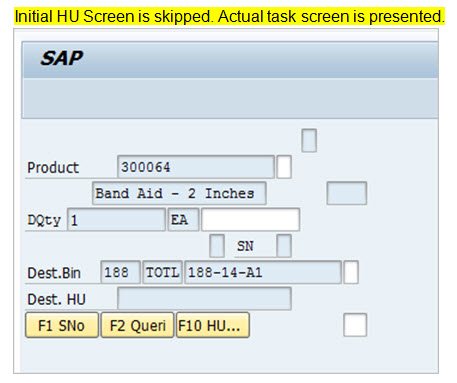 For different steps/transactions, relevant FM and Fcode needs to be identified. The table /SCWM/TSTEP_FLOW helps in figuring out the FM.

I have one requirement: adding page down/page up buttons in the same screen. If i will click the page down need to display the values 188-14-A2 at the destination scanning screen. Please any inputs.

Thanks for sharing, keep it up!

Just to share, I was also facing same issue and was able to solve my problem. Issue was with Function Code Profile configuration. I left blank some of the key fields like Prsn. Prof, Pushb.Qty, FKeyQty in configuration.

If you don't have any value to assign then just assign ** into those fields. If you left key fields blank then this issue might occur.