Help, I am being Gamified!

Gamification is just a fancy buzzword for game mechanics and Nic Pelling has a lot to answer for.

I like to think about gamification as “directed micro goal setting in order to induce an action.” This is the basics of what companies are looking for in loyalty programs or other customer engagement initiatives.

Looking at an actual Game

If you want to think about gamification then it is best to look at a game. One of my recent fun ways to pass odd moments is Jetpack Joyride 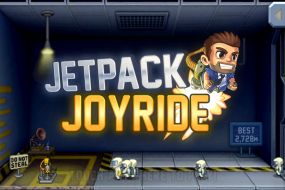 I like Jetpack because it is a quick game to play and they have varied missions to accomplish and there are lots of various badges and different accomplishments. So what makes it better for ‘gamification’? The game itself is pretty simple. You collect coins (cha-ching) and get to fly around a scientists lab while avoiding zappers, missiles and laser beams.

If that is all there was to it then it would be a pretty boring game and I would probably be over it after a few plays. I am not the best gamer in the world, for some reason I didn’t get into games as a kid so if I feel like I don’t get a game, I am not going to bother.

What makes it more compelling is the missions. There are lots of missions to complete to progress through the game. These are related to how far you travelled, how many coins you have collected, how many scientists you have ‘high fived’ and so on. These missions add interest to the game. Different missions require a different focus so this makes the game more varied. For some missions you need to collect a different vehicle or collect different gadgets to complete the mission. 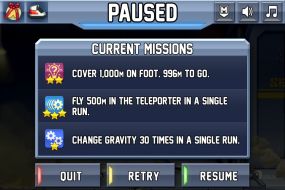 These gadgets require you to collect coins which need to be collected in the game or paid for as in ‘in-app purchase’ with real coins.

The missions allow you have a short term focus on what you want to achieve. This allows you to break down a big goal like collect 100 mission start into a small enjoyable bite size goal. These goals also introduce you to various elements of the game you might not find or try yourself.

Thinking about it, that is pretty much what every gamification platform is trying to get you do. SCN is trying to give you an incentive to get more engaged and involved in the site. There are goals for logging on and reading the codes of conduct and becoming aware of the right way to be involved. As you grow through the levels you may find that the points become less important as you have worked out what contributing to the community is really about.

If you have already bought into these values then the gamification doesn’t really add much. So it was telling to me to see long time SCN’er Graham Robinson 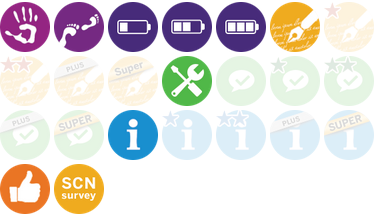 Sometimes what you need is a nudge and the gamification program helps you out by providing you a nudge in the right direction. If you don’t buy into is as I know some of you don’t then it is just a distraction.

Personally I think it is kinda fun. Just like I get a kick out of collecting a whole bunch of coins in Jetpack and upgrading to a Laser Jetpack, completing the missions and collecting the gadgets on the way. The aim here is to get you contributing good great awesome content here on SCN.

Yes there were some teething problems, just like every other change program you have been involved in. What I think that gamification adds is a quantifiable way of seeing how much value you are adding at SCN. Does that mean that an SCN Points total should be used as a way of qualifying potential applicants to a role? Perhaps, but only to the extent that the contribution to the community adds value in the role they are applying for. As the badges in various spaces become more prominent this may increase.

The Dark Side of Gamification

Gamification isn’t just all half-term adventures and lashings of ginger beer. There is a down side. No matter how well the program has been designed there will be people who game the gamification system. Point hunters and the like, creating multiple log-ins and answering their own questions. People begging for points to be awarded. People creating blog posts when they should be creating another type of document.

The dark side can also be an unhealthy addiction to SCN. Strange as it may seem, there are other things to do in life. Don’t be like those continually pulling the handle of the one-armed-bandit. Just because your point total has just gone up by two doesn’t mean you need to check who it was etc.

The design of gamification is to pull you toward a goal. You have to be the one who decides if that goal is a worthy goal or not.

I hope you are enjoying the ride on the SCN Gamification train. I trust that you will continue to contribute to the community.

Good one Nigel, much appreciated!

I totally agree on your comments about the dark side, it can be seen, fortunately it is just a small number.

As Jürgen L mentioned, I also think the dark side numbers is small.

Yes I think the design of the system has meant that the downside is small and the upside being reported of people being involved more in the site in encouraging.