It seemed like the Heat were in control of Game 1 all the way up to the eight minute mark in the fourth quarter, when Tim Duncan and Tony Parker, savvy veterans each with their own Finals MVPs, took over for the Spurs to advance to 7-0 in their last seven playoff games.

As disappointed fans filed out of American Airlines Arena in a wave of white shirts, Magic Johnson commented on ESPN that the Spurs big three played better than the Heat big three, and that was the cause for the Spurs win. Here is round two of the big three comparison.

Tony Parker scored double digits in points in the fourth quarter and none were more important than the last two he scored with less than a tenth of a second left, nullify LeBron James’ triple double.

At one point Chris Bosh shot a surprising three from the right part of the three-point arc. Fans of the Heat will be scratching their heads at the play, but here is a shot chart from the playoffs from that part of the floor vs. the regular season. Here not so good. 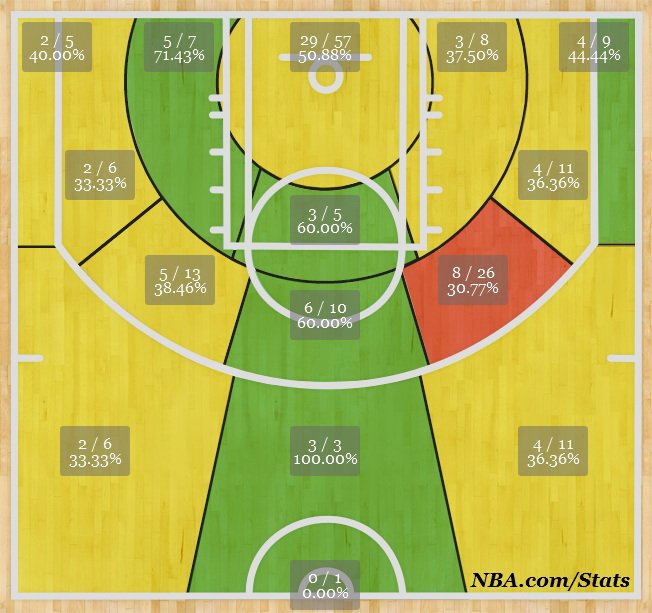 It turns out that he shoots a pretty decent percentage in the playoff from that bottom right quadrant.

The photos and stats throughout this live blog session have come from stats.NBA.com powered by HANA software. Stay tuned as I live blog game 2 of the Finals on Sunday.