Note: This is the latest in my blog series to help fans understand the value SAP will be bringing to the sports and entertainment industry. Today’s post was inspired by my sports analytics hero Kirk Goldsberry who writes for Grantland.com. You can read my NBA Sabermetrics 101 blog post as a primer if interested.

With the NBA Finals about to start, our attention has been focused on the superstars for each team: LeBron James & Dwayne Wade for the Miami Heat, and Tony Parker & Tim Duncan for the San Antonio Spurs. However, as NBA.com/stats (powered by SAP HANA) shows us, one unheralded role player (Shane Battier) could hold the key to the entire series. NBA.com’s “Shot Charts” feature shows us that Battier’s ability to make “Corner 3s” will have a huge impact on which team will win the NBA title.

What is a “Corner 3” and why is it important? 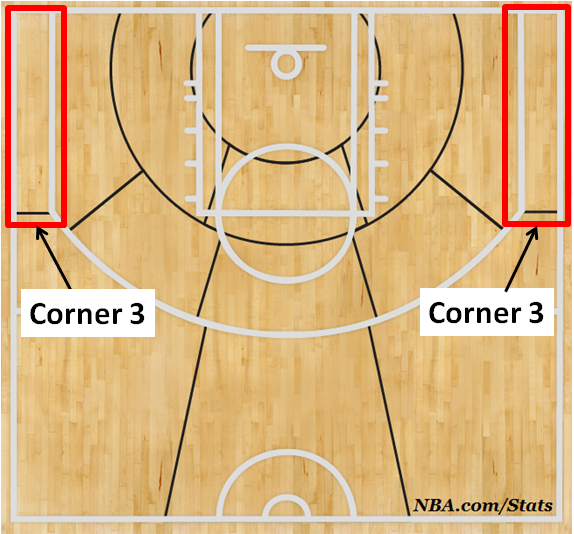 As the name implies, a “Corner 3” is a 3-point shot taken from either corner facing the basket (see image to the right). Some consider it the most important shot in basketball because it “stretches” a defense if you can put a great 3-point shooter in those corners. It creates space for other players to drive to the basket, it creates wider passing lanes, and it generally unclutters the area closest to the rim.

The Heat used this strategy to perfection during the 2012-2013 season. With LeBron James and Dwayne Wade being constant threats to drive to the basket, defenses were forced to collapse inside, thus freeing up shooters like Battier and Ray Allen to make corner 3s. While Allen is arguably the greatest pure shooter in history, Battier actually had the better year, making 46% of his 191 corner 3s (more than anyone in the NBA).

The video below shows how Battier is able to hover in the far corners (essentially unguarded) and wait for passes from LeBron.

While this worked beautifully during the regular season, Battier has gone ice cold during the playoffs – thanks in large part to a great Indiana Pacers defense. The Shot Charts below compare his field goal percentage during the regular reason vs. the playoffs. Notice how the Corner 3 areas have turned from green to red, indicating that his shooting has gone from league-best to below league-average. The game within the game

When Battier (and Allen) are making their corner 3s, the Heat are virtually unbeatable because opposing teams are put into a no-win situation. Either they let James drive to the basket where he is like a runaway freight train, or they give up a 3-pointer. Interestingly, the Spurs also rely heavily on the corner 3 (they ranked 3rd in the NBA in corner 3s made while Miami ranked 1st). When you watch the series, look for this “game within the game” to see how well each team’s 3-point shooters are doing. It could decide your next NBA champion.

Awesome post - love the analysis.  I have a feeling that the Spurs will be prepared because during their most recent championship seasons they had one of the premier "corner-3" shooters in Bruce Bowen.  The Spurs do an excellent job of closing out open spaces in their help defense and they have superior coaching. The "experts" seem to be torn between the Heat in 7 or the Spurs in 6, I am leaning towards the latter.

Thanks Brian, totally agree. The funny thing is the Spurs also rely on the corner 3, but that's probably more a result of Tony Parker pick & rolls and Duncan kickouts than drive-and-dish (though I haven't really studied it). It'll be fascinating to watch how each team tries to take the other out of their game.

Next time we see each other we'll have to hit a sports bar and have a beverage or two 🙂 .

Sounds like a deal.  I think one of the main reasons the Spurs have been consistent year after year is that they find players that fit their system 1) pick and roll/pop 2) drive and dump into the corners.

I think what you meant to say is that Ray Allen is arguably the greatest pure shooter in history that is not Bill McDermott's grandfather.

I personally expect to see Battier's shooting to rise back up and unless either team drops off it's Corner 3 percentage they should be relatively even. I think that Tony Parker's ability to eviscerate Mario Chalmers and Norris Cole versus Dwyane Wade's recent love affair with 20 footers early in the shot clock will be the difference makers.

Spot on with the Dwayne Wade observation.  His legs are shot, killing his quickness and ability to elevate.  That is the kiss of death for a slasher with a mediocre jump shot.

Good point. I had no clue about McDermott's grandfather until the Orlando keynote. That's just crazy stuff.