A client of mine asked for the Workflow for some DMS document manipulations and among others I decided to use SAP standard workflow task TS00007842, actually this is a call to CV02N transaction. As you can see in PFTC the task TS00007842 defined as asynchronous and so it has DRAW.CHANGED as its terminating event.

While testing modelled Worfklow we have notified the strange behavior of TS00007842 when terminating event occurs: the Workflow step becomes “Executed” and remains in the user inbox waiting for the end Confirmation. You can see this in the screenshot below: 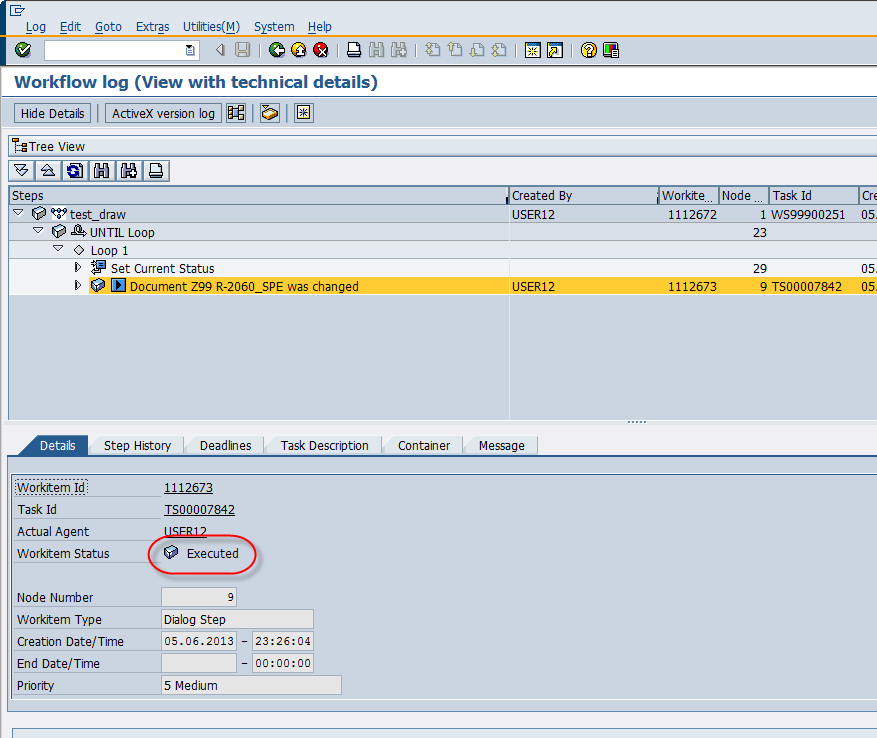 Moreover, when I open the step properties in Workflow designer (SWDD) I see that the step is marked with “Confirm End of Processing” and the same time the corresponding flag is cleared in the Task definition in PFTC:

The first obvious workaround I tried was copying the TS00007842 into a new task. To my regret the new task had the same issue. At the same time creating new task from scratch worked as it should – the terminating event ended the task without any confirmation.

Though the workaround was found it was interesting to investigate the issue.

The cause and solution

Investigation showed that the reason for such a behavior was due to incorrect record in HRS1201 table which had ‘X’ in CONFIRMTSK field.

Clearing the field solved the issue.

Actually I am not sure if the same situation is present in all systems. I checked this in two absolutely different systems ECC6 with basis version 7.02. So it is advisable to check if you have the same flaw in your system.

Thank you so much Segey, for sharing a fruitful information !