Material Stock and Valuation History tables – how to read them

All stock and valuation tables in SAP have as well history tables since release 45. All those tables have the same name as the standard tables, but with a H at the end.

This was implemented to speed up the period closing.

But how these tables are updated is for many users cumbersome, they expect to see a record for each month in those history tables, but SAP does it differently. SAP explains the logic in Note 193554 – Stock/valuation data of previous periods still we can see in many discussions that this note was not fully understood.

SAP does not update the history table when you execute MMPV to close the MM period.

The History tables are updated with first movement after a period closure.

If there is no movement for several months, then you will not see any history record for all those months that have past.

SAP writes only a history record for the month preceding a change in stock or value.

All the periods between 2 records in a history table had the same stock/value all the time, hence you can take the value for those periods from the record following these missing periods.

Here we see 8 history records for the valuation data MBEW of one material in one plant, created over a time span of 5 years:

many would expect to see 60 records for 5 years, but we had only 8 months with changes in those 5 years, hence only 8 history records were created.

And as proof a screen shot from MB51 Material Document list for the same material and plant: 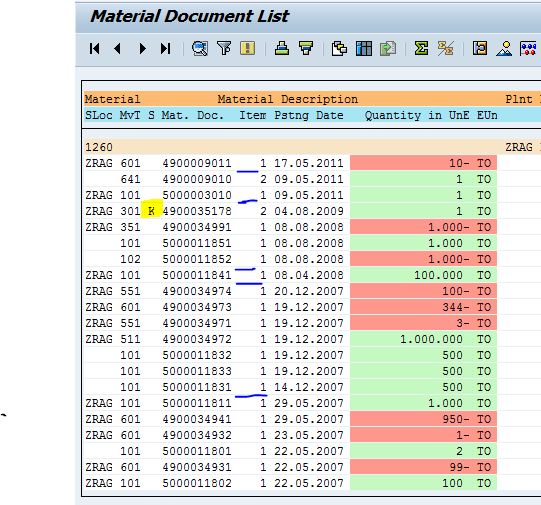 You can see that the first movement to this material happened on May 22, 2007. This event triggered the creation of the history record for period 004 2007.

The next month with movements was December 2007, which caused a history record for November 2007

The  movement type 301K (marked yellow) did not trigger any update in MBEWH table, because consignment stock has no value, hence no change to valuation, which means MBEW table is not affected.

If you need to develop own ABAP reports with month end stock then you have to make use of function modules that understand this complex logic. The name of these function modules is starting with the table name followed by _EXTEND (see table)

Please read the SAP Note 415349 – Usage of modules XXXX_EXTEND for previous period values for detailed information because the function modules are not released.

Thank you very much for giving conceptual clarification..

As per my understanding/study, the stock and value updated in history table for one perticular material is same as of closing stock and value which we can see in MB5B for that material at month end date.

I have been searching this information for long time.

Thank you for your explanation

this tables are as same as CO tables CKMLCR-CKMLPP

i wiss, i could read stock and value updated based on day

Thanks, that is my aim: to explain complex things in a way that it can be understood by everyone.

Excellent collection of tables, Good information thanks! Also you may wish to use MB5B Report (RM07MLBD) to inventory report beyond current and past period.

50 is the correct quantity.

Remember, the table is MBEWH which means valuated stock

the receipt of 2 is not to stock, there is no storage location, it is a receipt to a PO with account assignment.

Great document! Thanks for sharing!

amazing, quite a good one. Thanks for sharing.

Thanks for sharing this document, It helps a lot to understand this complex picture.

I have one thing to ask what yo mean by receipt of 2 is not to stock , it is receipt to a PO with Account assignment. What is the difference between them.

A little bit late but; when making a Goods Receipt that comes from a PO with acount assignment the "destination" of the material being received is not the Warehouse (or what you called "not to stock").

One good example is a purchase directed to a Cost Center (K); the value of the purchase will affect directly the Cost Center indicated in the PO, and you won´t see quantity being received at any storage location as those "goods" where delivered directly to the responsible of that Cost Center (business area).

Not sure if I missed the point above, but is it possible to read historical stocks (say, 2 years ago) directly through the FM MBEW_EXTEND or MARD_EXTEND? Is there any option programmatically to read these stocks?

SAP standard has reports like MB5B / MC.9 etc that can help out; however, often we need to fetch these values in a report; is there an API available that could help us here?

Do you not consider function modules as programs? MBEW_EXTEND can read 2 year old stock, MARD_EXTEND cannot.

Thanks for your note. I meant if these FMs can't do it, is there any other option programmatically?

Coming back to your point on the FM MBEW_EXTEND, could you tell me how we could read old stocks thru this FM. I tried using this FM with all different parameters and passing the current row from MBEW in MBEW_TAB as advised in the Note 415349, but it kept returning me the same line item. Do we need to go back period by period? Let's take an example, the MBEW record I have is for 03/2014, and the last record in MBEWH is for 02/2014. Can I read 02/2012 stock through this FM directly?

i got the same issue. get sales order stock quantity to a given date in the past ( period ).

if you need the coding just answer. i know, its a little bit time past 😉

The first March posting should create this February entry, if it was posted in the March period and not backdated to post in February period.

First search for OSS notes, if there is no suitable then open a call yourself

Sorry Jurgen, I thought my question was in an inappropriate place and hence had deleted my comment before you could reply.

Jurgen was replying to my following query:

We had some materials + batches, where we found that the history table entries were missing eventhough the 1st transaction in the new period has happened. I was asking him why this would have happened and if I should log a call to SAP for fixing this.

I logged an incident with SAP and they confirmed my finding that the history table entries were in fact missing. They created the missing entries manually.

Really appreciated article and very informative...not only for functional it also very useful from technical perspective too.

Is this the post you refered to in my deleted question regarding Historical values of customer consignment stock?

No, not directly as this is just about month end stocks and how the records in the historic tables work.
You were looking for a transaction, you can just copy your subject line into Google to find what you asked for.

I need a pointer here. I got my developer write a code in HANA to generate inventory (Valuated stock) from MBEW, MBEWH, EBEW, EBEWH, CKMLCR etc. Basically to generate period end inventory values. When this report is run for current period for a plant the values tie with GL.  The difficulty is running it for previous periods like behavior in MB5L or S_P99_41000062 or any other inventory report.

What are key fields SAP is using to look up or loop back for values in these tables for previous periods.  We triedMBEWH-LFMON, MBEWH-LFGJA.  Any pointer as to how my developer can code into HANA so when a report is run for say, previous period, logic is able to determine last value for each stock in each plant and return the same?

In table MARDH and MARCH the value in current period value is blank.

And because of this i am not able to do a system conversion.

Very clear and useful as usual On the other hand, actual stock in WBS 79610 is 2697 M as you can see in QBEW and MSPR, but never updated this value in tables QBEWH and MSPRH. Last movement 52274867 for that WBS was on 04.03.20 and this quantity remains equal until now. Following the logic yo explained is clear for me that in tables QBEWH and MSPRH effectively I have a record for period 02.20, but with zero stock. Shouldn´t have this record with 2687 M? More over considering no further movements were made against this WBS element

Otherwise I suppose function moludules XXX_EXTEND wouldn´t work to calculate for example today the stocks at the end of period 06.20, which is my actual requirement.

The thing is that the movement for 2697 M was the first for this specific WBS element, that´s why in QBEWH the record appears with zero value

The only question I would like you to confirm is the following:

If I use this functions XXX_EXTEND it´s sure that I will obtain all real values for the inmediate previous period, despite missing records or records with zero value for N previous periods in the historical tables?

I mean this functions are prepared to manage this situations and give me always real values for the previous period to actual, with the parameter you mentioned right? If I execute them today (july 2020), they should return values at the end of 06.20 right? This is exactly what we need and I would like to confirm with you before devope.

Thanks a lot again for your help

Can the total stock at the end of the period include the stock from the previous period?

Analyze how data are extracted from MBEWH in standard code.