Deep-Dive ChaRM and the User Status. Some Light on Customizing and Analysis via Debugging on Message ‘Not authorized to perform the activity selected last’

For customers, consultants and developers 😉

When a user status is changed via PPF action HF_SET_STATUS in the ChaRM Framework, sometimes the message ‘You are not authorized to perform the  activity selected last’ comes up and the user status is reset.

A bit more information on the ChaRM Framework can be found here in the screenshot ‘Request for Change – Standard Process Overview’:

The message can have different reasons, described in note 1706259. As they are connected to wrong customizing or missing authority, I would like to give you some more information at hand, so the developers out there are able to analyze this for there own.

The possible reasons known to me are:

1.) Missing authority for B_USERSTAT is the simplest thing. To check this via debugging set break-points (4 places) in class

2.) The Lowest/Highest Customizing defines if you are allowed to go from one user status to another user status. Each user status has a Status Number.

The Lowest – Highest value range defines to which status number you can go back from the current user status.

Please be aware that the user cannot jump to different user status without the customized PPF action to set the user status :-). So, this is just theoretically.

This is the most hardest case to explain. The status change history of a document is recorded. In our example again if we go from  ‘Create Functional Spec’ (10) to lets say ‘Hard Release Approval’ (35) and then to ‘Released for Production’ (40) our status history from lowest to highest reads…

Then the error comes up like in the screenshot. And unfortunately it is the same exception for 2.) The Lowest/Highest Customizing which makes it hard to create a specific message for the user.

Be aware that there can be additionally BadI implementations for the BadI CRM_ORDER_STATUS which hinder user status change. Described in note 1627673 f.e.

Here is a taste of this :-)…it comes back with the same exception 2 NOT_ALLOWED as well. 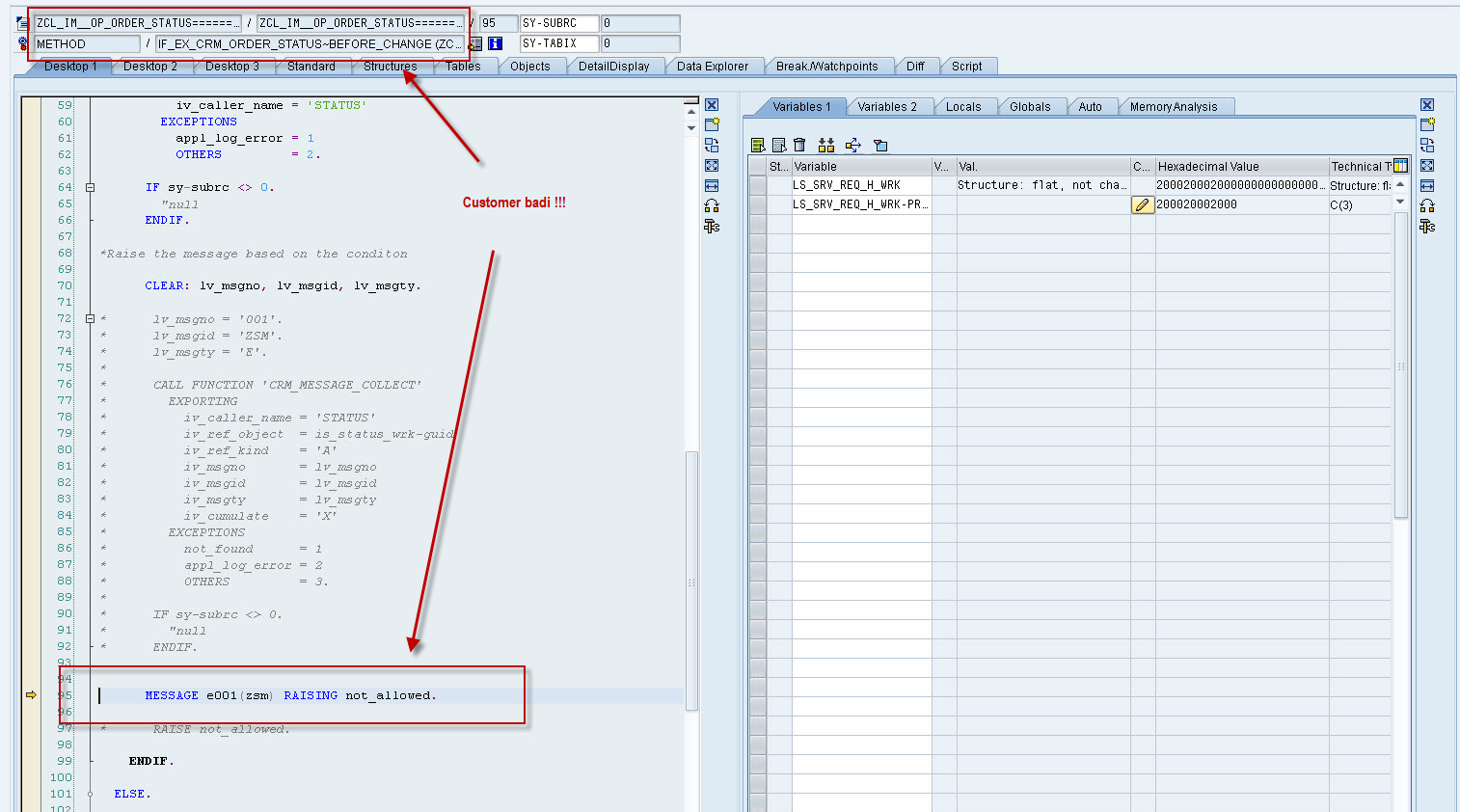 The function CRM_ORDER_CHANGE_STATUS is hard to debug as it contains a lot of logic and layers, down from CRM to the user status management.

I had the feeling there are further issues not yet described or recognized by me which can lead to exception 2 NOT_ALLOWED and they have are connected with system status issues but as I was not able to understand and explain it in detail, I will skip this and leave this to more experienced colleagues,

Hope that sheds some light on the issue,

I currently discussed my ‘feelings’ that there are further influences with another collague and I want to share this with you.

5.) If the User status sets an system status this can have further relations as well.

I want to explain this via another example. Take the user status profile of an the standard Request for Change (SMCRHEAD). 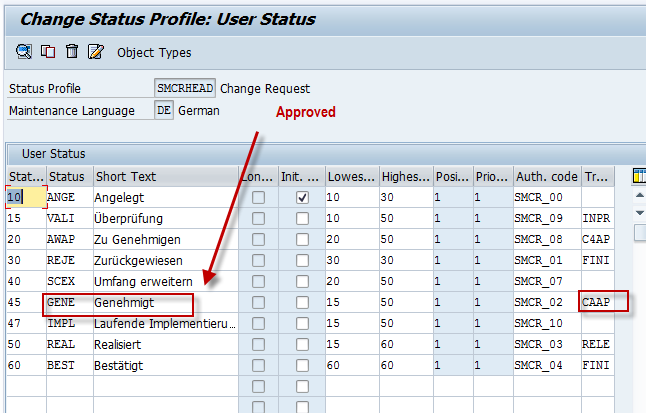 The user status ‘Approved’ (german: Genehmigt) has the ‘CAAP’ indicator assigned in the ‘Transaction’

(User Status Triggers Business Transaction) column. The implications what happens behind can be checked if you choose ‘Enviroment->Transactions’ in this screen. Then transaction ‘BS33’ (‘Transactions’) is displayed which lists all the available transactions. 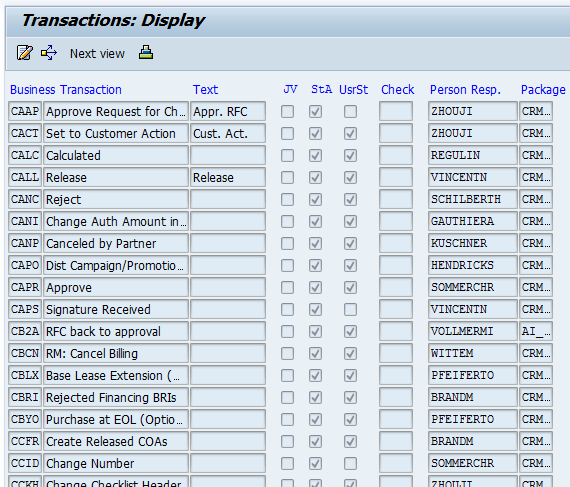 You can search for CAAP and see it approves the approval procedure. But what does it really do in the background?

If you double-click on the line, you get another screen, listing all the internal system statuses and which ones are set, deleted or not changed when this specific transaction ‘CAAP’ is set. 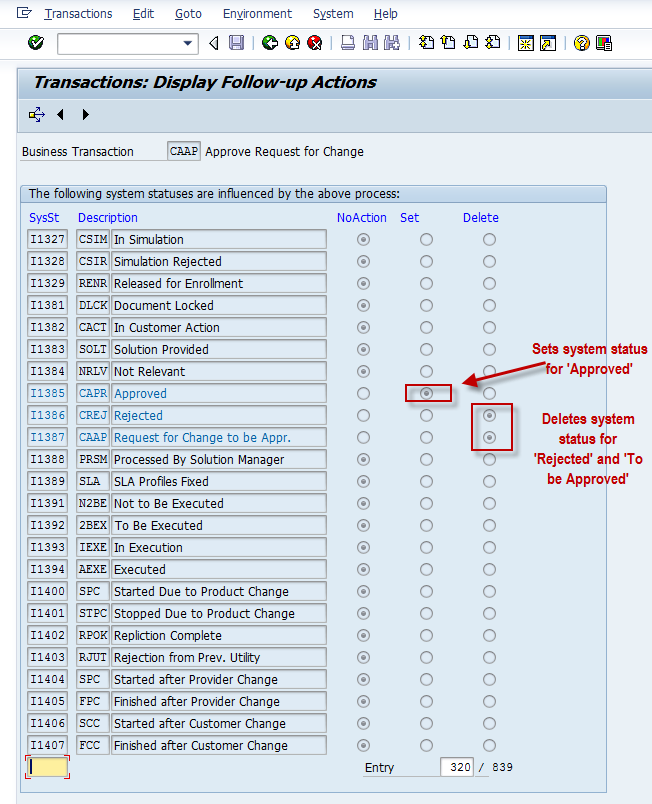 Most system status are uneffected but you can see, the system status ‘I1385’ for ‘Approved’ is set, the ‘I1386’ and ‘I1387 for ‘Rejected’ and ‘To Be Approved’ are deleted. If you know set the cursor on the Business Transaction ‘CAAP’ field and choose the ‘Where-used’ icon, you get an overview screen which sheds some light on the dependencies…

Here, it is listed…

In short that means if you have an standard Request for Change and it contains errors (error messages) you cannot set the status E0004 (‘Approved’) as the business transaction ‘CAAP’ cannot be set. This would lead to the same exception 2 NOT_ALLOWED.

it is not clear for me, in point 3) following the same logic, how system allow change status from 'Hard Release Approval' to 'UAL' while status history remembers that we were already in status 'Hard Release Approval' (35) and this status has a lowest/highest range customized from 35 to 50 and then this is out of range for 'UAL' (30).

you are correct, when creating the example, I oversaw this. I have adapted it. Thanks for the comment, now it should be clear.

Good one It’s really a deep dive into status profile.

Please can i get assistance for the abaper to bebug

Sorry Ravindran, I am not familiar with this area. Cheers

Hi Michael.  Many thanks for this deep dive.

According to item 5, could then we create our own transactions, like CAAP?.  Here is what we are trying to accomplish:

We created a new phase in ZMMJ, but depending on certain criteria during phase "In Development", we want the user to visualize only one of 2 possible phases:

- "To be Tested" (standard from SAP today), or our new phase

In order to accomplish that, when phase In Development is happening, at certain point we evaluate the criteria in our Change Document or in the RfC and based on that we could update table CRM_JEST for the Change Document with a new status, which will influence what the user can see when trying to move the Change Document to the next phase.

Let's clarify with an example.

1. We had previously added a Start or Schedule Condition in phase, e.g. "To be Tested", like this:   &CRM Service Process.StatusTable& CE X3333

2. Let say that certain criteria in our Change Document "In Development", makes that the new status occurs:  X3333.

3. When that happens, we update table CRM_JEST for the Change Document with that status X3333.

4.  After that is done, then we are fulfilling the Schedule or Start Condition and therefore, when the user tries to change the phase, the only phase he should see is "To be Tested".

In theory this can be done, but I do not see how can we add new transactions like CAAP.  We are going to keep digging, but if you know if that is feasible, could you confirm or even suggest another path?

Many thanks indeed for your time,

After digging a little more we think we found the solution.  It all involves transactions BS32, BS22 and BS12, in that order, to create the Business Transaction and Statuses mentioned above.

Then, after having made the entries in CRMC_ACTION_CONF, we are ready to test.  For that, function module BBP_PROCDOC_STATUS_CHANGE can be used to change a document status.   Once that is done, in theory, the Action Definition: Start or Scheduled Condition is triggered.

Now we have to test all that beauty!!!

Michael:  I never thought I was going to get that deep in the configuration of all this.

Regards and thanks again for the tip.